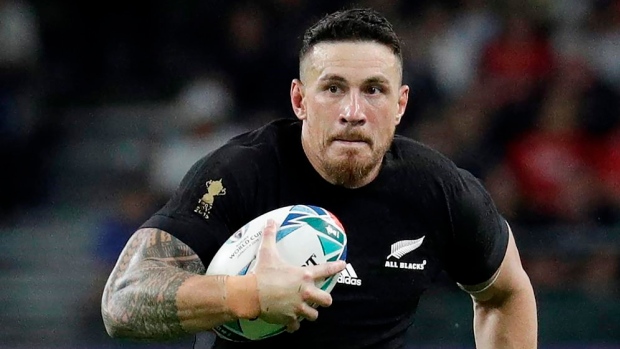 Toronto Wolfpack star Sonny Bill Williams is on the move, with the Sydney Roosters looking forward to adding the former All Black to its lineup.

The former All Black posted a social media photo of himself and one of his four kids, along with Toronto teammates Bodene Thompson and Ricky Leutele at the Manchester airport Wednesday.

"Sad to be leaving the U.K. on this note, but grateful to have met these two," Williams wrote to his 988,000 followers on Instagram and 894,900 on Twitter. "God willing we cross paths soon."

Williams, his wife and four young children expect to spend two weeks in quarantine upon arrival in Australia, meaning he likely won't play for the Roosters until late August at the earliest.

The Sydney Morning Herald reported the Williams family will self-isolate inside a three-bedroom Sydney apartment complete with halal food products to comply with his Islamic faith. He is also being provided access to a gym.

Williams told Australia's Nine Network he had booked flights to go on a European family holiday before the Roosters offered a short-term contract to return to the NRL.

"It's no secret that I'm pretty close with the lads at the Roosters, Nick (chairman Nick Politis) and Trent (coach Trent Robinson) and I stay in contact with," Williams told the Australian network. "Trent just gave me a call and inquired about what was happening over here and Nick hit me up and asked if I had a couple of months in me to come back."

Williams, who turns 35 on Monday, drew immediate interest after the Wolfpack, citing financial challenges due to the global pandemic, announced last week that it was sitting out the remainder of the Super League season.

Super League is schedule to resume play Sunday behind closed doors in England.

Williams' future with the Wolfpack was already in doubt given he and other foreign players on the Toronto roster were running out of time on their work visa.

The visas allow the foreign players to spend six months of the year in England, which is not a problems when the team commutes to Canada. But the pandemic kept them in England, eating up their allowable stay.

Australian Blake Wallace was not affected because he has been living in Canada during the team's hiatus.

Williams previously played for the Canterbury-Bankstown Bulldogs (2004-08) and Roosters (2013-14) in the National Rugby League with a stint in rugby union in between. He won the NRL title in 2013 with the Roosters.

Wolfpack majority owner David Argyle has said the club plans to field a team in the 2021 season. But that, as well as what division the team would play in if allowed back into competition, depends on English rugby league authorities.

Argyle has said all players, including Williams, are free to negotiate with other teams this season with the Wolfpack ready to discuss each case individually.

While the NRL rules state a player cannot hold two contracts concurrently, it appears the league is willing to make exceptions for Williams in order to facilitate his arrival.

Argyle approves of the apparent workaround.

"Because right now the most important thing is to showcase rugby league at the best quality — whether it be NRL or Super League — to the world," he said.

His Wolfpack deal was worth a total of $9 million, with Williams getting an ownership stake in the club, according to a source granted anonymity because they were not in a position to publicly divulge the information. But his 2020 salary, as with other Super league players, would have been negotiated down due to the pandemic.

The NRL website reported it was unlikely the New Zealand Warriors would sign Leutele to a short-term deal unless he got the same exemption as Williams, saying he was "unwilling to terminate his lucrative Wolfpack deal, which runs until 2021, for a brief Australian return."

Williams and Leutele were designated as the Wolfpack's marquee players, meaning only 150,000 pounds ($260,145) of their contract counted against the team's 2.1-million-pound ($3.64 million) salary cap.

The Wolfpack, who began play in 2017 in the third-tier League 1, were 0-6-0 in their first season in the elite Super League. They had not played since March 11 because of the pandemic.

Super League has since expunged Toronto's points and results from the standings.

Wolfpack coach Brian McDermott, calling the transatlantic franchise a "brilliant concept" with "such amazing potential," paid tribute to his players during the club's recent rocky road.

"It's been an unbearable situation for them more than most and they've waited for such a huge amount of time for answers and shown an incredible level of loyalty to each other and the Toronto Wolfpack club," he said in an email to The Canadian Press.

He also thanked "some members of staff who have quite literally put their own lives on hold to give the club their full attention to be able to get through this testing period to hopefully survive and come out of the other side."

Changes have to be made, he added.

"As a club we have to look at ourselves and look at what we need to be better at. It's not been an easy ride off the field for over 18 months ... but there were and are areas of our club that were simply not good enough or professional enough. That is something we will look to fix straight away.

"I hope and trust that the game makes a smart and informed decision when judging our situation and takes into account some of our unique challenges that we've faced."