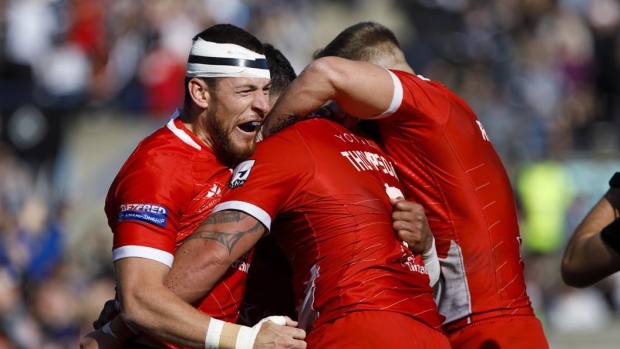 TORONTO — The Toronto Wolfpack will start and finish the 2020 Super League season in England.

The Super League announced its revamped schedule for the resumption of rugby league play, with Toronto playing its remaining games on the other side of the Atlantic.

"Regrettably for the Wolfpack the challenges around travel, international border protocols and the hosting of public events in Toronto have proved too significant for the team to be able to host games at Lamport Stadium this season," Toronto CEO and chairman Bob Hunter said in an open letter to fans.

"This is not a decision that has been taken lightly, and we vow to return to Toronto bigger and better than ever before in 2021."

Toronto has not played at home since Oct. 5, 2019, when it won promotion to the Super League with a 24-6 victory over Featherstone Rovers in the Million Pound Game before an announced sellout crowd of 9,974 – a Wolfpack record — at Lamport Stadium.

Rubbing salt in the wound, Toronto fans also woke up to the news Thursday that winger Liam Kay, the team's all-time leading scorer and first-ever player signing, had left to join Wakefield Trinity.

The Wolfpack, 0-6-0 in their first season in the top-tier Super League, have not played since March 11, when they blanked Huddersfield 18-0 in the fifth round of the Challenge Cup. Play was suspended five days later.

Super League features 12 teams — 10 in England, one in France and the Wolfpack.

The schedule grows more crowded near the end of the season with Toronto playing its final six games over three weeks.

That's a concern given the physical nature of the sport. It's more of a worry for Toronto, which has a small squad and is trying to resolve a looming visa issue involving New Zealand star Sonny Bill Williams and six other imports.

That's not a problem when the Wolfpack are spending part of the season in Canada. But the global pandemic has kept the players in England and the visas are slated to expire at the end of the month.

Because the Wolfpack are Canadian-owned, they require different visas than overseas players employed by English clubs.

Hunter said the issue is being resolved, with a solution that would also cover the 2021 season.

But some of the team's imports may still head home.

"Because players have the right to not play. And so some of the players are thinking about going home," Hunter said in an interview. "We just haven't resolved who and sort of when. And if they go home and take their families home, when and if they'll come back. Because some have said 'I just want to get home, get them settled but I'll come back.'"

Super League said it will review dates and venues "in the back end of the campaign ... in line with government advice and in discussion with our host broadcaster, Sky Sports."

The hope is the teams can eventually host games with fans in their home market — possibly in mid-September — with the exception of Toronto.

The Wolfpack are looking at playing their home games at their opponents' stadiums, given it might increase interest in the game. Toronto will get a split of the gate in such cases.

The fact that the Wolfpack could play their entire season away from home supports their argument against having relegation this season. While the Super League has already said relegation should be off the table due to the disruption of the season, the Rugby Football League has yet to make its ruling. A decision is expected next week.

The playoffs, featuring the top four in the 12-team league, are scheduled for mid/late-November with the Grand Final scheduled for the end of November.

The championship game was originally slated for Oct. 10.

Super League said clubs will be back in training by the end of next week.

Under the original 2020 schedule, nine of Toronto's first 10 games were to be played in England with the other in France — with the late start due to the Canadian winter and the bubble over Lamport Stadium yet to come down. The Wolfpack were to play 11 of their last 19 games at home, with the season wrapping up Sept. 11.

Three other home games were to be played at neutral sites in England.