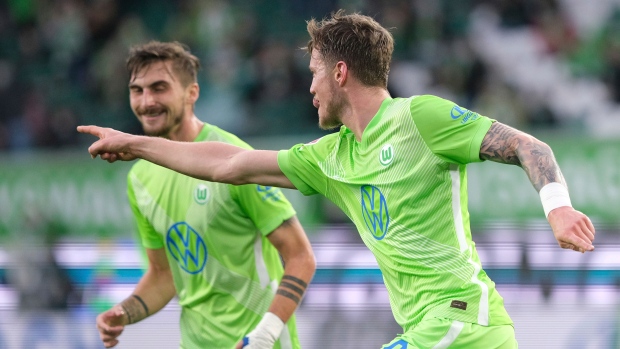 WOLFSBURG, Germany — Wolfsburg held on to beat visiting Arminia Bielefeld 2-1 on Sunday for its first win of the season in the Bundesliga.

Sven Schipplock’s 80th-minute strike gave Bielefeld hope of a point and prompted the home side to scramble to prevent an equalizer for what would have been its fifth consecutive draw in five games.

Manuel Prietl struck the post minutes later but it was as close as the visitors came.

Two goals in two minutes from Wout Weghorst and Maximilian Arnold in the 19th and 20th proved to be enough for Wolfsburg’s first win at home in the league for eight months.

Werder Bremen was held to a 1-1 draw by Hoffenheim in the late game.

Maximilian Eggestein fired the home side into an early lead in the fifth minute, but Dennis Geiger equalized for Hoffenheim in the 22nd.

Hoffenheim’s Robert Skov came closest to getting a winner when he hit the right corner of the goal frame with a free kick late on.

Leipzig is top of the table by one point from eight-time defending champion Bayern Munich and last season's runner-up Borussia Dortmund after five games.

On Saturday, Julian Nagelsmann's Leipzig beat Hertha Berlin 2-1, while Bayern enjoyed another rout with Robert Lewandowski hitting a hat trick in a 5-0 win over Eintracht Frankfurt. Dortmund defeated Schalke 3-0 in the Ruhr derby.

Bayer Leverkusen hosts Augsburg to conclude the round on Monday.