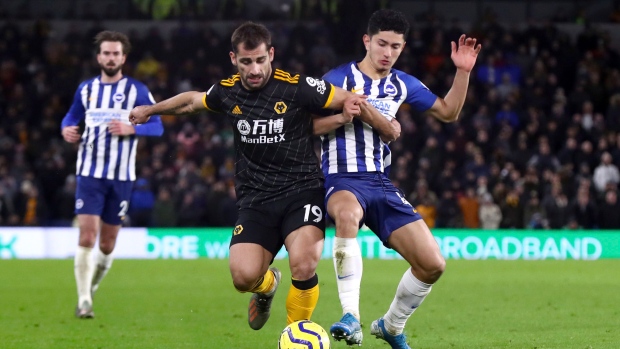 The forward struck either side of quickfire goals from Neal Maupay and Davy Propper in a 16-minute spell at the end of the first half.

Another point on the road lifted Nuno Espirito Santo's spirited side back up to sixth, while Brighton's encouraging start to the season continued as the south-coast team went 12th.

Wolves went in front after 28 minutes, when Jota fed the ball wide for Raul Jimenez, who provided the return pass for the Portuguese to sidefoot from a central position.

Jota was denied a second by goalkeeper Mat Ryan after racing through one-on-one, and the miss quickly proved costly when Brighton launched an astonishing turnaround.

First Maupay latched on to a ball over the top from Dale Stephens and sent a superb first-time shot inside the near post.

Wolves, who moments earlier had been in cruise control, were stunned again 90 seconds later when Leandro Trossard pulled the ball back and Propper headed into the net.

It was Propper's first home goal for Brighton, more than two years after joining the club, but it took just eight minutes to cancel it out as a breathless first half came to a close.

Propper's pass sideways rolled straight to Jonny, who was able to slip in Jota for his second goal to equalize. After the break Lewis Dunk survived a VAR check after blocking Jota's close-range shot, with Wolves claiming a handball.

Wolves could have snatched the win late on when Patrick Cutrone reached the byline and pulled the ball back but fellow sub Pedro Neto was unable to provide the finish.