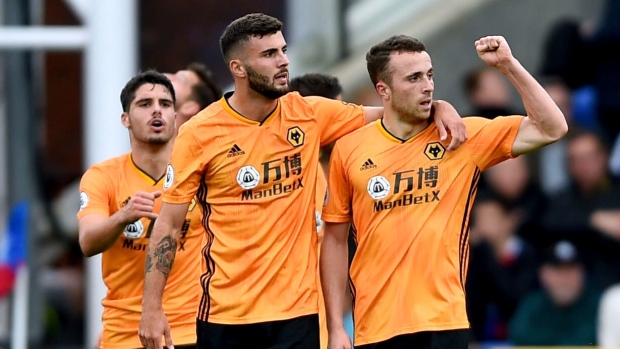 Roy Hodgson's team looked set for another home win at Selhurst Park after taking the lead through Leander Dendoncker's own-goal in the 46th minute, but a mistake at the back saw the visitors level with virtually the last kick of the game.

It halted a run of three straight losses for Wolves, but Palace would have been frustrated after playing against 10-men for the final 17 minutes — when Romain Saiss received a second yellow — and squandering several chances during that period.

Santo's team entered this fixture following a 1-0 loss at home to Braga in the Europa League on Thursday which resulted in him ringing the changes.

Ruben Neves was one of four dropped with Joao Moutinho in from the off and his corner should have resulted in the opener after 10 minutes.

The Wolves midfielder picked out Dendoncker at the back post — after he escaped the attention of Mamadou Sakho too easily — but his side-footed shot from close range was blocked by the returning James McArthur.

Despite playing on Thursday, the away side was looking the more likely, but Wilfried Zaha slowly started to become more prominent for the hosts.

The Ivory Coast international forced a couple of corners midway through the half and from the second, Jordan Ayew tested Rui Patricio with a header from Luka Milivojevic's cross. It was a routine save for the Wolves goalkeeper, but three minutes later his counterpart in the opposite end produced a fine stop.

Raul Jimenez led the counterattack and picked out Matt Doherty at the back post, after more slack Sakho marking, but the wing-back saw his six-yard header wonderfully tipped behind by Vicente Guaita in the 29th minute.

More precise passing around the Palace box created a chance for Jota, after Jimenez's slick through ball, but he fired straight at Guaita from 14 yards seven minutes before the break.

Santo would have been pleased with the response by his team, but frustrated by their lack of clear-cut opportunities and this came back to haunt them at the start of the second half.

A great run by Jeffrey Schlupp down the left saw him break into the box and although the chance seemed gone, Cheikhou Kouyate won possession back and McArthur set up Joel Ward to open the scoring 33 seconds after the restart.

The right back celebrated with all his teammates, but the goal went down as an own-goal after Dendoncker deflected it past Patricio and it was the 100th Premier League goal Palace had scored under Hodgson.

Dendoncker nearly had the unwanted record of a second own-goal in the 56th, but this time the effort from Milivojevic rolled wide.

Wolves manager Santo had seen enough and introduced Neves and Pedro Neto, but saw their task get a whole lot harder in the 73rd when Saiss received his second yellow.

Both fouls had been on Zaha, who despite not registering a first goal or assist of the season, had played his part.

The game became more stretched during the final quarter of an hour with home substitute Christian Benteke firing straight at Patricio in the 78th before Jota's fine run was halted by Sakho's strong tackle.

Schlupp should have put the game to bed after the 90 minutes of regulation time was up when he was sent through.

But Patricio saved and Wolves attacked with Ward failing to clear Adama Traore's cross, allowing Jota to tap home and earn a point.