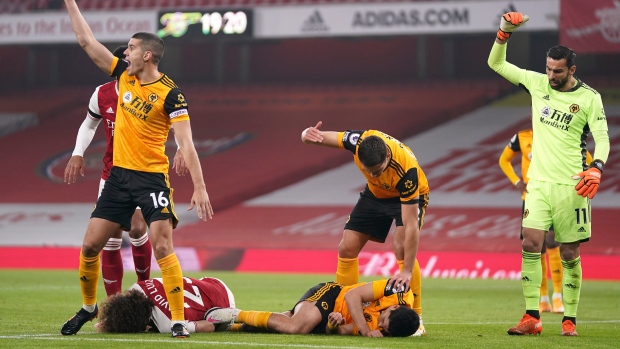 WOLVERHAMPTON, England — Wolverhampton Wanderers striker Raul Jiménez had surgery to treat a fractured skull after a clash of heads with Arsenal defender David Luiz during a Premier League game, the club said Monday.

Jiménez and Luiz collided while jumping for the ball at a corner early in Wolves' 2-1 win on Sunday. Jiménez was wheeled off the field wearing an oxygen mask and taken to the hospital.

Wolves gave an encouraging update hours after the game, saying the Mexico striker was conscious and talking.

“Raul is comfortable following an operation last night, which he underwent in a London hospital," Wolves said in a statement. “He has since seen his partner Daniela and is now resting. He will remain under observation for a few days while he begins his recovery."

The last Premier League player to sustain a similar injury was Everton defender Michael Keane, who had a hairline fracture of the skull in August 2018 and was out for a month.

Before that, Ryan Mason fractured his skull in a clash of heads while playing for Hull at Chelsea in January 2017. He returned to training in May of that year but didn't play another competitive match and was forced to retire in February 2018 on the advice of neurologists.

Goalkeeper Petr Cech sustained a depressed fracture of the skull in 2006 when he slid in at the feet of an opponent while playing for Chelsea. He required emergency brain surgery and wore a head guard in matches for the rest of his career.

Jiménez's heading ability is among the best in the Premier League among strikers, and is a key part of his game.

Without its top scorer from last season and arguably the team's best player, Wolves has only one out-and-out striker in Fabio Silva — an 18-year-old player who arrived from Porto in the off-season for a reported fee of 35 million pounds ($45 million) despite having limited experience in the senior game.

Luiz played on with a bandaged head until halftime. Arsenal maintained that the Brazil defender never lost consciousness.

“They have some tests they have to do before they put him back on the pitch, and then David was just concerned about the cut, nothing else,” Arsenal manager Mikel Arteta said, adding that Luiz "was fine.”

The incident comes amid growing scrutiny into the long-term impact of head injuries in soccer. The players’ union in England has called for limits on heading the ball in training sessions amid concerns about a possible link to players developing dementia later in life.