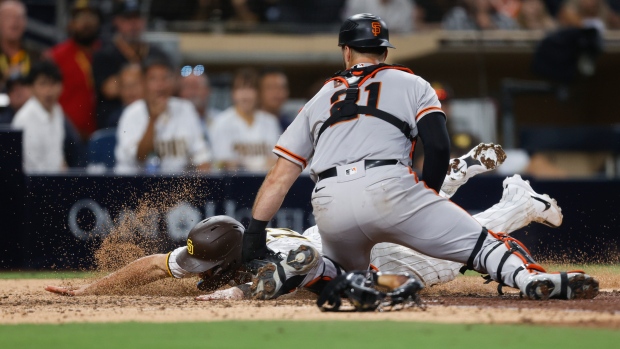 SAN DIEGO (AP) — Alex Wood held San Diego to three singles in 6 1/3 innings and the San Francisco Giants benefited from an overturned call at the plate to beat the sputtering Padres 1-0 Monday night.

It was the fifth straight loss and second consecutive shutout for the Padres, who fell to 1-5 since obtaining Soto and Bell in a blockbuster trade last Tuesday. They were coming off a three-game sweep at Dodger Stadium in which they were outscored 20-4. Their streak of scoreless innings reached 23 dating to Saturday.

San Diego's lead over Milwaukee for the NL's third wild card is down to one game.

The Padres appeared to have tied it at 1 when Brandon Drury was called safe at home as catcher Joey Bart applied the tag on a headfirst slide after Kim Ha-seong's double into the left field corner with one out in the seventh. But the Giants challenged and the call was overturned, to thunderous boos from the sellout crowd of 40,686.

There was a slight delay as a few fans threw trash onto the field, prompting a warning from the PA announcer.

After wasting a great scoring opportunity in the first inning, the Giants broke through against Blake Snell in the fourth. They opened the inning with consecutive singles by Evan Longoria, J.D. Davis and Brandon Crawford to load the bases, and Thairo Estrada hit a sacrifice fly. Snell walked Bart to load the bases again before retiring the final two batters of the inning.

Snell (4-6) got into trouble right away when the Giants had runners on first and third just two batters into the game but he got out of it by striking out the heart of the order.

Snell allowed one run and six hits in 5 2/3 innings, struck out eight and walked two.

Giants: Reinstated Longoria from the 10-day injured list and optioned OF Bryce Johnson to Triple-A Sacramento.

Padres: Manager Bob Melvin said reports from Fernando Tatis Jr.'s minor league rehab assignment indicate the star shortstop feels good after playing Saturday and Sunday with the Double-A San Antonio Missions, who were off Monday. Tatis broke his left wrist in the offseason, reportedly in a motorcycle crash, and had surgery in mid-March. Melvin said the Padres are still on the timeline of Tatis playing seven to 10 days in the minors. “He needs some at-bats. He needs some games,” Melvin said. ... C Jorge Alfaro left the game after the seventh with an undisclosed injury.