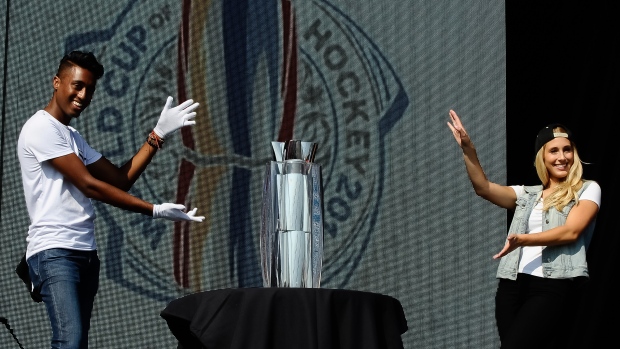 His memory of that whole night is a blur now, but Jay Bouwmeester can clearly remember his reaction when organizers presented the World Cup of Hockey trophy to Team Canada captain Mario Lemieux in 2004.

In a moment of pure exuberance, it was a feeling of bewilderment.

“I remember when they brought it out, everyone was like ‘What is that thing?’” Bouwmeester said Tuesday morning. “That was everyone’s reaction.

Twelve years later, one of the strangest awards in pro sports is somehow back. It has been tweaked and re-designed — but only slightly. Renowned Toronto-born architect Frank Gehry, the man who designed the original trophy, was again commissioned by the NHL and NHLPA. Neither organizing party provided insight into why the designer of a trophy so widely panned was brought back for another run.

The joint press release stated only Gehry was “specially commissioned” by the NHL and NHLPA “due, in part, to his lifelong passion for hockey” and that it was a “labour of love.”

This year’s version is an entirely new piece of hardware — one meant to be used from now on. The 1996 and 2004 World Cup of Hockey trophies are on display at the Hockey Hall of Fame, along with the original Canada Cup trophy, curator and keeper of the Stanley Cup Phil Pritchard said in an email Tuesday.

This edition of the 32-pound stainless steel and solid cast acrylic World Cup is more transparent than its opaque predecessor. The Toronto Star still labelled it the “weird cup of hockey.” It looks vaguely more curvy and modern, though the original design was contemporary anyway. The names of the 1996 and 2004 World Cup of Hockey champions from the United States and Canada are laser etched on the inside. It has room for up to 10 championship rosters.

Gehry Partners described the new World Cup as one that “seeks to capture both the toughness and the elegance of the sport, with a design that embodies the exceptional skill, commitment, and fortitude required of a winning team.”

Bouwmeester and Joe Thornton are two of the five holdovers from the 2004 World Cup who skated in this year’s tournament.

Thornton said last week that the glow of winning presented the 2004 World Cup trophy in a different light, maybe one that only the victors could appreciate.

“I remember it being beautiful,” Thornton said, smiling.

“I actually loved that logo back in the day with the little red and blue guys,” Burns said. “I used to collect the logos from McDonalds.”

Then again, it is impossible to compare the World Cup to the best trophy in sports. There is almost zero tradition with the World Cup of Hockey. The tournament has only been played three times, without any regularity, and the format is different this time around with a decidedly less international feel with Canada taking on Team Europe in the final.

The World Cup isn’t about the hardware, though. Burns said Canada is playing to win because “everyone in this country watching hockey wants us to win.” He likened it to the Sharks’ pre-game soccer warm-up competitions in the bowels of arenas — the only award is the ball and the satisfaction of being that day’s champion.

“In our game, the only trophy you chase is the Stanley Cup,” Bouwmeester said. “The Olympics is a different thing — you get a gold medal. There are not a lot of people that can say that. As an athlete, that’s a pretty big deal. Beyond that, it’s about being part of the team and playing for your country.”