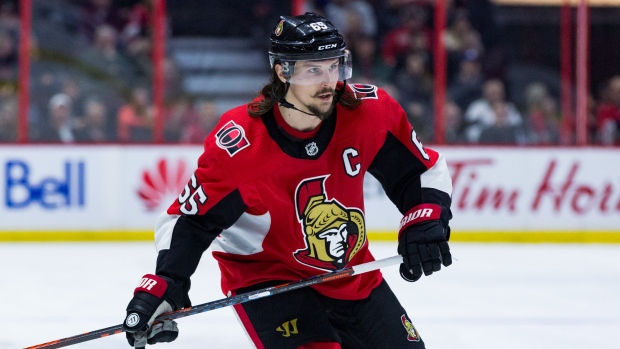 Ottawa residents awoke Tuesday morning to the coldest June 4 in the history of the city, with the temperature sitting at just 3.5 C at 6 a.m.

But things certainly heated up around the nation’s capital in a hurry, as the front page of Tuesday’s Ottawa Sun suggested that Erik Karlsson could be open to returning to the Senators as a free agent.

The tabloid publication had a large-font headline that screamed, “RETURN OF THE KING?” with a picture of Karlsson wearing a superimposed crown upon his head.

Karlsson is still treated as royalty by many in these parts, considered by a large segment of the fan base as the greatest player in franchise history. The mere suggestion that he could be open to returning has resuscitated dormant feelings from fans who vowed to disconnect from the franchise once it let the captain walk out the door.

If the Senators alienated a portion of their fan base by trading Karlsson to San Jose last September, it stands to reason they could win a majority of them over by bringing him back into the fold.

The Senators have never had another superstar in Karlsson’s stratosphere. He’s a game-changing defenceman who was in the conversation as the best player in the world just two years ago. His dynamic personality – both on and off the ice – allowed him to seamlessly connect with the fan base.

On the surface, this would seem to be a slam-dunk decision for the Senators. A former superstar – who is still only 29 – wants to come back and play for your team. Considering the Senators have had a major issue keeping their own superstars, let alone attracting top-tier free agents, this move alone would be seen as a massive PR coup.

By re-signing Karlsson, the Senators could singlehandedly extinguish the notion that their franchise is a laughingstock and that no superstar wants to play in this market. Karlsson has an intimate knowledge of the situation in Ottawa and if he were willing to sign up for several years, it might be the biggest endorsement of the path taken by general manager Pierre Dorion.

But the question is: Does Karlsson fit into the Senators’ rebuilding plan?

When the Senators traded Karlsson to San Jose last fall, it was the official start of a massive rebuilding effort. In some ways, it was the first match lit in a scorched-earth approach that saw stars like Mark Stone, Matt Duchene and Ryan Dzingel get shipped to other destinations.

The Senators have embraced the youth movement in the months that have followed, fully committing themselves to the likes of Brady Tkachuk, Thomas Chabot and Erik Brannstrom.

Bringing Karlsson back might seem like an abrupt change of course for a franchise that has been accused of making too many sharp turns in the past. This is the franchise that traded for Duchene in November of 2017 and then sharply changed direction by announcing the start of a rebuild just 10 weeks later.

If the club is genuinely committed to a youth movement, it could seem like an unnecessary and impulsive move to bring back their 29-year-old former captain. There will be some who believe the Senators should stay committed to the full rebuild, even if Karlsson comes back knocking on the door of Canadian Tire Centre.

The club believes they will be ready to be a Stanley Cup contender at some point around the 2021-2022 season – when Karlsson will be 32 years old. Given his injury history over the past two seasons, it’s a fair question to ask what his physical condition might look like down the road. Would a 32-year-old Karlsson be the engine of a Stanley Cup contender, an accessory part or something in between?

The Senators also have a plethora of offensively minded and skilled defencemen in the system with the likes of Chabot, Brannstrom and Christian Wolanin. Would there be enough minutes to go around – especially on the power play – for so many skilled defenceman on the same team?

The interesting conundrum for the Senators is that all of their young puck movers are left-handed shots – whereas Karlsson plays the right side. In theory, he could be paired with a Chabot or a Brannstrom to create a pairing of elite, skilled defencemen.

Chabot is emerging into a world-class defenceman in his own right and his next contract – which the Senators can officially start negotiating with him this summer – might end up looking similar to something they would be now willing to offer Karlsson. It’s not unrealistic to think that the Senators might be willing to do an eight-year contract with Chabot this summer, with a conservative estimated dollar amount ranging anywhere from $55 million to $65 million.

The good news for the Senators is that they have plenty of cap space to play with after jettisoning so many contracts in the past two years. After the 2019-20 season concludes, the Senators are only on the hook for two skaters – Bobby Ryan and Zack Smith.

This gives them a tremendous amount of flexibility to sign players and if they are willing to live up to their promise of spending near the cap when they are a contender in the year 2022, it shouldn’t be a major obstacle to bring Karlsson into the fold at this juncture. The Senators should have enough room to bring in Karlsson as a UFA and give healthy raises to pending RFAs such as Chabot, Tkachuk and Colin White as their entry-level deals expire.

The Senators insist they made Karlsson a more than reasonable offer around July 1 last summer – believed to be a maximum eight-year deal in the neighbourhood of $85 million to $90 million. But instead of that serving as the catalyst for serious negotiations, the talks simply died on the vine and Karlsson was traded to San Jose on the first day of training camp.

It would be interesting to see what the Senators’ offer would be like this to Karlsson this summer, but it seems like a fair statement to suggest that the leverage has now swung in favour of Dorion and the club. If Karlsson is truly willing to re-sign in Ottawa for family reasons, one could assume he would take some type of hometown discount – something he was reluctant to do in the past.

The Senators would be wise to explore the possibility of bringing back Karlsson on their own terms – maybe a smaller dollar figure or potentially a shorter term.

At the very least, there seems to be legitimate chatter about a superstar wanting to play in Ottawa. At this juncture, that has to be seen as a victory for the Senators franchise – no matter how this situation with Karlsson plays out.