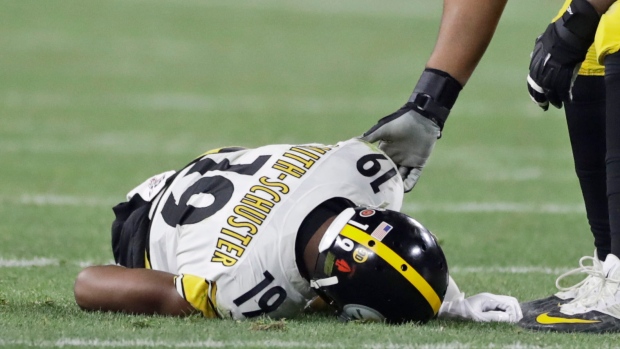 PITTSBURGH — Despite some encouraging signs to the contrary earlier in the week, the depleted Pittsburgh Steelers offence won’t be getting its top wide receiver back for what is a crucial game this weekend.

JuJu Smith-Schuster will not play when the Steelers host the Buffalo Bills on Sunday night. The Steelers’ No. 1 wideout left Thursday’s practice early and did not participate in Friday’s session at all, ending hope he would avoid missing a fourth consecutive game because of a knee injury.

“I mean, it’s tough,” Smith-Schuster said Friday, shortly before it was announced via the release of the official injury report that he was out for Sunday’s game. “I’ve never been in this situation like this where I have been out for a long period of time. It’s something that’s definitely new to me, and I am learning myself and how I react to it. It could be frustrating sometimes, but at the same time it’s part of life, it’s part of the game, it’s what comes with this.”

Smith-Schuster has not played since being knocked out of a Nov. 14 loss at Cleveland when two Browns defensive backs delivered helmet-to-helmet hits to Smith-Schuster that also left him concussed.

Though he was cleared from NFL concussion protocol Nov. 27, Smith-Schuster’s knee injury lingered longer than originally anticipated. Smith-Schuster had been wearing a bulky knee brace around the team facility over the past three weeks, and he did not practice until this past Wednesday.

But following full participation in that session, the three-year pro was limited Thursday and did not practice at all Friday.

Smith-Schuster refused to refer to what happened Thursday as a “setback,” instead maintaining it had been determined he was pushing too hard to come back too soon.

“He’s got all the enthusiasm and energy and effort and want to,” offensive co-ordinator Randy Fichtner said. “You know, sometimes injuries take their own time. You’ve just got to keep working through it.”

Already down to a No. 3 quarterback in undrafted rookie Devlin Hodges and also without starting running back James Conner over the past three games, the Steelers (8-5) won all three to improve to 5-0 without Smith-Schuster. Picking up the slack at wide receiver in the interim have been James Washington and Diontae Johnson. The second-year player Washington had long touchdowns during wins at Cincinnati and at home vs. Cleveland; rookie Johnson had two touchdowns (one on a punt return) during last week’s win at Arizona.

“They’ve been snapping out there this whole past month and just doing their job,” Smith-Schuster said. “It’s amazing to see how far we’ve come with the guys out there on the field.”

The challenge continues Sunday against a Bills defence that ranks third in the NFL overall and against the pass. Pittsburgh's offence also will be missing No. 1 tight end Vance McDonald (concussion) and might still be without Conner, who is questionable because of a shoulder injury that has kept him out of five of the past six games.

At least the Steelers will have No. 2 running back Jaylen Samuels; he had missed practice time because of a groin injury.

“They want us to be able to win with whatever we’ve got there out on the field,” Washington said. “It's important that every (receiver) knows different positions, everyone knows what their role is for that week and know all the plays, and be able to help guys out and take advantage of opportunities that come your way."