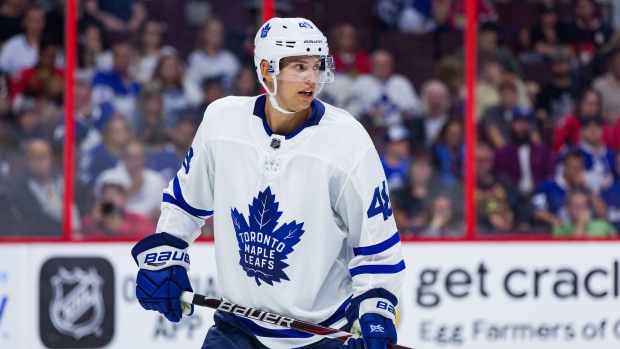 Toronto Marlies defenceman Calle Rosen took a nasty-looking tumble into the boards during Game 1 of the club's second round playoff series against the Cleveland Monsters Wednesday night. He stayed down for a while and ended up leaving the game without returning.

Calle Rosen took a hard fall into the boards during Game 1 of the Marlies' second-round playoff series tonight vs. Cleveland. @mikeystephens81 notes that Sheldon Keefe said X-rays on Rosen came back negative, but there was no further update on his status. https://t.co/72nbQUKySf

After the game, Marlies head coach Sheldon Keefe said x-rays came back negative on the defenceman but there was no further update on his status.

The incident occurred early in the first period as Rosen went to play a loose puck in his own zone. Rosen appeared to cross paths with a Monsters skater and lost his balance, tumbling hard into the boards from a short distance away.

Rosen, 25, has spent eight games with the Toronto Maple Leafs at the NHL level, registering one goal and one assist. He was on the Leafs' playoff roster this spring but did not appear in a game and was re-assigned to the AHL following the team's elimination at the hands of the Boston Bruins in Game 7.

Rosen appeared in 16 Marlies playoffs game last season as they went on to win the Calder Cup.