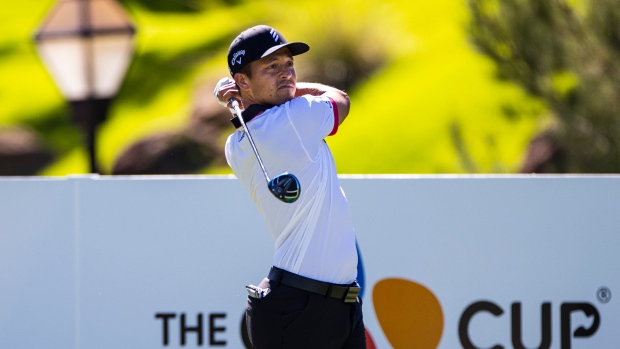 LAS VEGAS — Xander Schauffele began his second round by missing a 4-foot birdie putt. That was hardly a sign of what was to follow Friday in the CJ Cup at Shadow Creek.

Schauffele made putts as short as 3 feet and as long as 35 feet. He chipped in from 20 feet. He seemingly couldn't miss during a two-hour stretch when he made seven birdies over eight holes, including six in a row, for a career-best 29 on the back nine.

His momentum slowed with the pace of play, and he settled an 8-under 64 for a three-shot lead over Tyrrell Hatton.

“Some of those holes, you're not really trying to birdie them, you're just trying to leave yourself an uphill 35-footer. And fortunately, I made a couple of them,” Schauffele said. "It was a nice stretch. Got a little bit stale there on the other side. Pace of play slowed down a lot, kind of hot, easy to let the mind wander.

He was at 14-under 130 and now has the course record at Shadow Creek, which is hosting the CJ Cup for this year only because the COVID-19 pandemic made travel to South Korea impractical.

Hatton, among six players who were in England last week for the European Tour's flagship event, was headed for a rocky finish when he laid up into the rough on the par-5 16th that led to a second straight bogey. He rallied to close with a pair of birdies for a 68.

Defending champion Justin Thomas found some momentum with six birdies, despite missing two easy chances on par 5s, for a 66 and was eight shots behind at the halfway point.

“I guess I played my way somewhat back into it,” he said before turning to look at the scores on a nearby monitor. “But Xander kind of went off today, so that makes it a little harder.”

Thomas kept glancing at video boards trying to figure out what Schauffele was doing, besides making a lot of birdies.

“This is a place you can do it,” Thomas said. “You can go crazy low out here. You've got a lot of bowl pins, a lot of pins you can get close to. If you don't have control of your ball, as firm as the greens are, you can make a lot of bogeys, too.”

He played alongside PGA champion Collin Morikawa, who shot a 65, and Viktor Hovland, who had a 66. They were a combined 21-under par, with a better-ball score of 59.

Schauffele was doing most of the damage. After his tee shot to 3 feet on the 211-yard 13th hole, he rolled in a 25-foot putt on the next hole, a birdie putt from just over 35 feet on the 15th, two-putted from a sidehill lie on the fringe at the par-5 16th and looked to be in trouble on the par-3 17th when his tee shot landed beyond the green near the creek.

The hop was gentle, leaving him in thick grass, and he chipped in. Then on the par-5 18th, he had to lay up from a fairway bunker, hit wedge to 15 feet below the hole and made that.

That's when he hit the brakes, and so did the tournament. The course has enough reachable par 5s (and one par 4) to lead to congestion. And with so few volunteers, there is a lot of searching for balls, along with provisional tee shots.

Hovland had one just short of the par-3 fifth hole as he looked through thick grass framing the bunkers. Brooks Koepka had his entire group searching left of the seventh fairway (he also hit a provisional) until it was found. He took a penalty drop into the rough, advanced it down the fairway and made a 12-footer for par.

Jon Rahm, who can return to No. 1 in the world with a victory this week, made a 5-foot eagle putt on his fourth hole. He made four bogeys and no birdies over his next 10 holes, birdied the last for a 73 and was 10 shots behind.

Rory McIlroy had a mixed bag of seven birdies and four bogeys for a 69, leaving him 12 behind and looking for momentum to carry into next week at Sherwood Country Club.