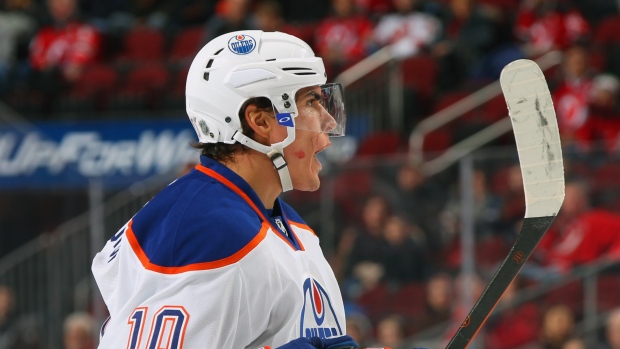 NEWARK, N.J. - Edmonton Oilers forward Nail Yakupov seemingly didn't mind either the ugly red scrape on the right side of his chin or the five stitches above his lip.

Collisions happen in hockey and sometimes there is damage.

Yakupov not only shook off an early mid-ice collision, the struggling 21-year-old forward scored a game-winning, power-play goal in the second period to lead the Oilers to a 2-1 victory over the New Jersey Devils on Monday night.

"Finally, it's got to go in," Yakupov said after ending an 11-game goal drought. "I'm just trying to get open. We got good guys and skill players who can pass the puck. I had a couple of shots that couldn't go through. The third one I put in. That's what I've got to do more and more every game."

Jordan Eberle had the primary assist on Yakupov's goal, and helped set up defenceman Oscar Klefbom's tally as the Oilers snapped a two-game losing streak.

Devils fans were booing at the end of a game most expected would be a laugher against the Oilers (15-30-9), who have the fewest wins in the NHL.

"Obviously, we did some good things, especially in the third period," said Oilers goalie Ben Scrivens, who had 13 saves. "The last couple of weeks we've had opportunities to close games out and we've been making mistakes. We weren't so much being outplayed as causing our own headaches. It was good that we took a positive step forward tonight."

The loss was the second straight for the Devils, who had gone 8-2-2 in their previous 12. It was a big hit to their playoff hopes.

"It's up to us to figure this out," said Cory Schneider, who had 22 saves, including a stop on a breakaway by Teddy Purcell with just over three minutes to play. "For sure, the last two games have been a setback for us, but we have no one to blame but ourselves. No one is going to come and bail us out."

Patrik Elias scored for the Devils.

Yakupov missed a couple of first-period shifts after a collision with Devils forward Steve Bernier. He was down on the ice for at least two minutes and didn't return until late in the period.

"I went for a change and I didn't see the guy," Yakupov said. "I was really nervous for a couple of minutes. At first I wasn't positive at all I'd come back but I wanted to come back. Our doctor did a pretty good job."

The Oilers, who hadn't tallied a power-play goal in six games, took a 2-1 lead when Yakupov scored from the right circle at 12:45 of the second period as Devils defenceman Adam Larsson served a delay of game penalty for shooting the puck into the crowd.

"Yak's shot was definitely a relief to get that goal," Eberle said. "If you're not scoring, that's one place you have to try and pick it up."

Edmonton, which had only scored one goal in losing its last two games, got two in the opening 40 minutes against New Jersey.

Klefbom tied it 1-1 with 36 seconds left in the first period after the Oilers did an excellent job of keeping the puck in the New Jersey end. Ryan Nugent-Hopkins made the initial play, flagging down a clearing attempt at the right point. Eberle set up Klefbom near the right circle for a shot that beat Schneider.

Elias, who was honoured before the game for scoring his 400th goal, 600th assist and 1,000th point this season, had given New Jersey the lead 5:47 after the opening faceoff. Martin Havlat took the puck from Derek Roy along the left boards, skated toward the net and found Elias in the right circle for his 401st goal and eighth this season.

NOTES: Devils RW Michael Ryder was a healthy scratch for the seventh straight game. D Eric Gelinas was held out for the sixth time in a row. ... Oilers D Mark Fayne returned to the Prudential Center for the first time since signing with Edmonton as a free agent after last season. ... With the Devils seemingly headed to a third season out of the playoffs, owners Josh Harris and David Blitzer heard boos when introduced during the pregame ceremony for Elias.