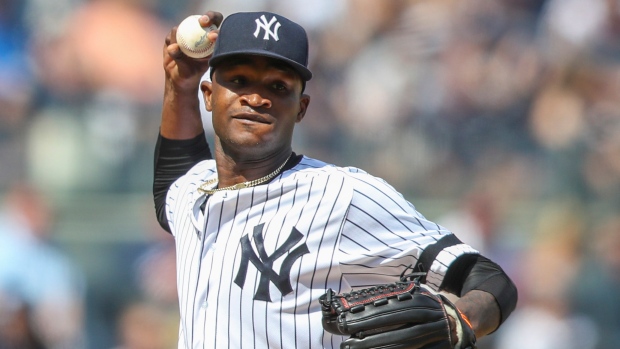 There was no noticeable reaction from the socially distanced crowd of 2,352 at Steinbrenner Field when Germán took the mound to start against the Detroit Tigers.

"I felt welcomed,” Germán said through a translator.

Germán struck out four and allowed one hit, a double by Wilson Ramos. The 28-year-old righty walked none.

“Exciting to be back on the field, be back with my teammates,” Germán said. ”I felt relaxed, confident.”

Germán was 18-4 with a 4.03 ERA for the Yankees when MLB put him on administrative leave while investigating an alleged domestic violence incident involving his girlfriend, with whom he has at least one child.

Germán missed the final nine games of the regular season and all nine of New York’s playoff games. On Jan. 2, 2020, he was suspended for 63 games — he was out for the entire pandemic-shortened 2020 season and playoffs.

Back with the Yankees for the start of spring training, Germán spoke with his New York teammates last week and issued a public apology the next day.

Germán hopes to earn a spot in a rotation projected to include Gerrit Cole, Jordan Montgomery and newcomers Jameson Taillon and Corey Kluber. He also is looking to resolve some uneasiness among his teammates.

“Put it in the past and move away from it,” Yankees catcher Gary Sanchez said through a translator. “Start taking steps toward a special future.”

Germán pitched during the off-season in the Dominican Winter League.

“Pitching over there helped,” Germán said. “Put me at ease. I could still compete and that I can find my way back to be the same pitcher that I was."

Germán made his big league debut in 2017.

“Overall I thought I saw confidence from him,” Sanchez said. “That’s what I wanted. I wanted for him to go out there and have fun and just execute with confidence.”

The Yankees and Tigers played to a 1-all tie.

Ottavino was traded to the rival Red Sox on Jan. 25, and the Yankees agreed to send the rival Red Sox $850,000 to cover part of the $8 million owed to Ottavino, a 35-year-old right-hander entering the final season of a $27 million, three-year contract.

“The Ottavino trade was difficult. We wanted to buy some flexibility,” Cashman said Friday in his first public comments on the moves. “We’re a completely right-handed lineup for the most part. And so and we play, obviously, Boston within our division for more times than you want. So it’s going to create great lanes for him. ... You’ve got to focus when you make these type of decisions on what’s in it for you. ... The method to the madness was to buy flexibility you can utilize either now or later.”

New York again figures to start seven right-handed batters in most games along with switch-hitting centre fielder Aaron Hicks, and eight on days that Clint Frazier starts in left over Gardner.

“There’s going to be lanes for other managers to navigate with if they have a starter/reliever that is really difficult on right-handers,“ Cashman said. "Of course, that’s an area of weakness, the fact that we’re so right-handed and don’t have as much mix and match there. So it’s definitely something that we’re aware of.”

A good number of fans continue to ignore the mask mandate at Steinbrenner Field. … Cashman said the rehab program for RHP Luis Severino is going well and he should be ready to throw off a mound soon. Severino could be back in June or July.