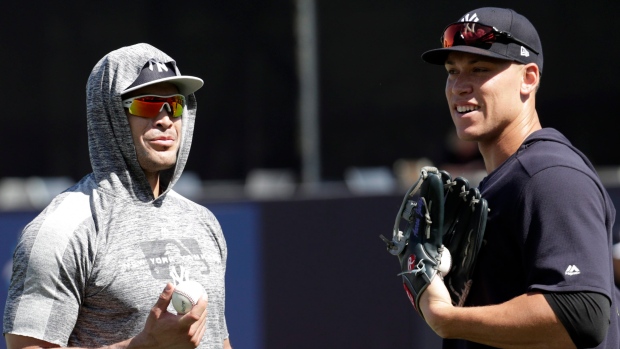 CHICAGO — The New York Yankees might have their most feared sluggers back in the lineup soon after Aaron Judge joined Giancarlo Stanton on a rehab assignment with Triple-A Scranton/Wilkes-Barre on Friday.

Judge, making his first rehab appearance, went 0 for 4 the designated hitter Friday night in a 16-3 loss at Durham. Stanton started in right field and hit a three-run homer off a building behind the left field wall after the Yankees transferred him from Class A Tampa to Scranton/Wilkes-Barre.

"We feel like they're at a point where they're doing well and obviously they've got to get through these final steps and hurdles and rack up some time here," Yankees manager Aaron Boone said. "But we're starting to plan and get excited for them, hopefully joining us at some point on the homestand."

Judge, the 2017 AL Rookie of the Year and a two-time All-Star, has been sidelined since April 20 because of a strained left oblique. Stanton, the 2017 NL MVP, has not played for the Yankees since March 31 because of biceps, shoulder and calf injuries.

Boone said Stanton could be ready to rejoin the club after the weekend as long as he doesn't experience any setbacks. The Yankees open a 10-game homestand Monday against the Tampa Bay Rays.

Judge will probably need a little more time with the Triple-A club. Boone said the plan was to have him serve as the DH the first two games before playing him in the outfield.

"We'll want him to get out there and get some back-to-back games where he's on defence and it's more about building up that kind of in-baseball-shape kind of thing," Boone said. "Whereas Giancarlo, obviously, is a little further along there."

The Yankees have placed 20 players on the injured list this year, matching their total for the entire 2018 season. Even so, they came into Friday's game against the Chicago White Sox leading the AL East with a 41-26 record.