Best of 2021: Vladdy smashes massive 3-run blast out of the stadium in Boston

Right now, there isn’t much going on across Major League Baseball.

A fast start to the off-season that saw over $2 billion spent in free agency and contract extensions came crashing to a halt in early December as Major League Baseball and the MLB Players Association were unable to agree to a new collective bargaining agreement before its expiration.

Subsequently, the owners voted unanimously to enact a lockout, effectively shutting down the business of baseball until a new CBA is reached. And who knows when that will be.

With tensions already high between the two sides after they didn't agree on a restructured framework for the shortened 2020 season, multiple reports indicate they’re just as far apart this time and it could be weeks – if not months – before things are rectified. With fewer than two months until pitchers and catchers report for 2022 spring training, the clock is ticking. But all we can do it wait.

Well, that, and revisit the year that was, which was one of the most fun for Canadian baseball fans in recent memory.

As part of TSN.ca’s Year in Review series, here is a look back at the breakout of Vladimir Guerrero Jr., a wild season for the Toronto Blue Jays and a renaissance 2021 for Joey Votto. 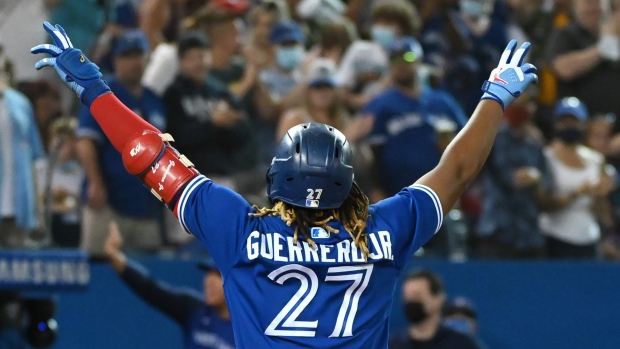 Not long after the Blue Jays signed Guerrero as a 16-year-old out of the Dominican Republic in 2015 did expectations start to accumulate. After tearing through the minors with a highlight reel longer than most big leaguers, Vlad Jr. made his much-anticipated debut in April of 2019. As there often is for players seeing big league pitching for the first time, there was an adjustment period. Guerrero finished his rookie year hitting .272 with 15 homers and 69 driven in but went deep just twice over his final 44 games. Not bad by any means, but not quite what fans were expecting.

Year two was more of the same as Guerrero shifted from third base to first and bounced between mediocre to slightly above average at the plate. While it was clear Guerrero would be a key piece for the Jays moving forward (24 homers .778 OPS in his first 183 games), questions were starting to emerge about whether or not he was the franchise cornerstone many were expecting.

Vlad Jr. went to work on his body over the winter and came into camp a lot more mobile, saying he shed 42 pounds since the previous summer.

"One day at my house in the Dominican I just sat down and thought about all this. I decided right then that I was going to get ready, I was going to prepare myself, I was going to work very hard for this year. I did, because my main focus is just to be ready and help the team win,” Guerrero said in February through a translator.

He came out of the gate on fire.

Guerrero was hitting .338 with a 1.035 OPS through his first 21 games of the season, but what he did in game 22 signified to all of baseball how dangerous he’d become.

Toronto’s slugger torched the Washington Nationals for three home runs – two coming off Max Scherzer, including a grand slam – and seven RBIs as the Blue Jays rolled to a 9-5 victory.

Guerrero’s father, a Hall-of-Famer himself, couldn’t have been more proud.

“What a night for my boy. All that hard work is paying off,” the former Montreal Expos legend tweeted.

“He was locked in," teammate Bo Bichette said. “I don’t really think you can really explain how you feel on nights like that. It’s probably just a blur and everything looks in slow motion.”

As the weeks and months rolled on, Guerrero kept mashing. The 22-year-old breezed into the break with 28 home runs and 73 RBI while appearing in all 87 games his team played in. He was also named to his first career All-Star Game, starting for the American League at first base.

If Guerrero was at all nervous playing on possibly the biggest stage of his life, he didn’t look it. In the first inning, he ripped a screaming line drive up the middle that missed National League starter Max Scherzer’s head by mere inches. As he jogged back through the infield after being thrown out at first, Guerrero met Scherzer at the mound for an apologetic hug.

But the next time he came to the plate, he wasn’t so kind. Facing eventual NL Cy Young winner Corbin Burnes in the third inning, Toronto’s phenom took a 1-1 high changeup way deep and gone to left centre field for a mammoth 468-foot home run that gave the AL a 2-0 lead. The blast was the longest home run ever in the All-Star Game since Statcast began tracking in 2015. The elder Guerrero homered off Brad Penny in the 2006 All-Star Game, meaning they now joined Bobby and Barry Bonds as well as Ken Griffey Sr. and Jr. as the only father-son duos to homer in a mid-summer classic.

The first-time All-Star drove in another run later on in the game and the AL went on to win with Guerrero being named game MVP.

“Dad, this is for you,” he said when presented with the award.

But as much as Guerrero was excelling, the Jays were stuck in second gear.

Toronto began the second half of the season in third place in the American League East at 45-42, eight games back of the division-leading Boston Red Sox. The Jays knew it would be a crucial stretch for a playoff push coming out of the break and they got a boost two weeks later by finally returning home to Rogers Centre.

Due to travel restrictions and quarantine mandates associated with COVID-19, the Blue Jays began the 2021 season at their Spring Training home in Dunedin, Fla., and moved to Buffalo – home of the Bisons, their Triple-A affiliate – in June when the Florida heat became too intense.

On July 30th, the Jays played their first game in Toronto in nearly two years and Guerrero Jr. would pick up Toronto’s first hit en route to a 6-4 victory over the Kansas City Royals. Manager Charlie Montoyo called it “one of my best days in baseball.”

The Jays hit their stride once they returned home. Toronto won eight of nine, pushing their record to 59-49, except they didn’t make up any ground in the American League East, remaining stuck in fourth place and out of a playoff spot.

It ended up being a microcosm of their season. Despite finishing the year 20 games over .500 with 91 victories – their sixth highest win total ever – Toronto ended up missing the playoffs by a game.

Not unlike his team, Guerrero’s 2021 was overshadowed by Shohei Ohtani’s historic two-way season. Vlad Jr. led the league in on-base percentage (.401), slugging percentage (.601), OPS+ (169) and finished in a tie with Kansas City’s Salvador Perez for the home run crown. Almost without question, he was the best offensive player in the AL.

And still he didn’t gain one first-place vote for American League MVP. Of course, given what Ohtani did, it makes sense.

"It's sad, but we just have to move on," Guerrero said after the final game of the regular season once the Jays found out they were eliminated.

"I think this will make us a stronger team, a better team next year."

The season might not have ended the way Guerrero and the Jays wanted it to, but it was sure fun.

Votto turns back the clock 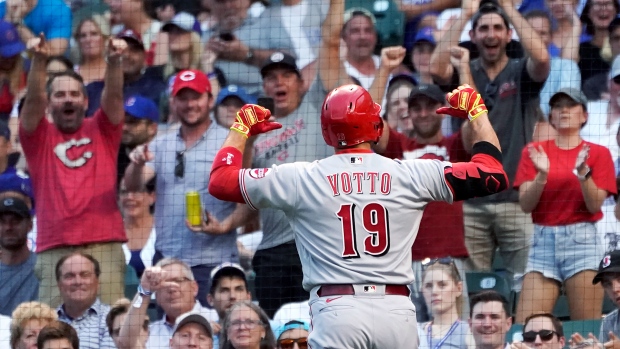 In late August of the 2020 season, Cincinnati Reds first baseman Joey Votto found himself benched for the third straight game.

His numbers were dreadful 25 games in, hitting .191 with three home runs and eight RBI. In his last game before taking a seat, Votto was ejected for arguing balls and strikes after striking out for the fourth time.

“We're in the performance business, we're in it to win. I've been a part of too many losses, and I need to be better for sure,” he said of his play at the time.

Votto used the time off to make some swing adjustments and came back with a vengeance, tearing the cover off the ball over the final month of the season.

The Etobicoke, Ont., native turned in eight home runs and an OPS of .941 over his final 29 games, setting the stage for 2021, where he may not quite have been the Votto of old, but he wasn’t far off.

Votto came into this season at 37, an age that isn’t exactly friendly to first basemen. In their age-37 seasons, Miguel Cabrera and Albert Pujols – two hitters similar to Votto in terms of their line-to-line power and ability to hit for average – slashed .250/.329/.417 and .241/.286/.386, respectively. Votto also contracted COVID-19 during spring training and less than a week after hitting his 300th career home run, he went on the shelf with a left thumb injury that forced him to miss more than a month.

Once he returned from the injured list, the 2010 National League MVP started to heat up.

He hit .293 with five homers and 17 RBI in 21 games during June. At the end of the month he homered off Joe Musgrove of the San Diego Padres for his 1,000th RBI, becoming just the seventh active player to reach four digits.

But Votto was only getting started.

On July 24, Votto dug in against St. Louis Cardinals right-hander Jake Woodford and took a 2-1 pitch deep and gone to left field to extend the Cincinnati lead to 3-1.

The next day he went deep again, and the next day, and the day after that, this time twice, giving him home runs in four straight contests. This matched the longest homer streak of his career and was one shy of tying the Reds’ record.

“I think it’s more of like, it’s about time,” Votto said. “I expect to play like this.”

So he wouldn’t have been surprised when he did it again the next day, swatting two more homers in an 8-2 victory over the Chicago Cubs. Votto became the ninth player in team history dating back to 1900 to go deep in five straight games.

“He just continues to be fun to watch and contribute in a big way to our wins,” manager David Bell said. “It's really a pleasure and a joy to watch him at the plate right now.”

He would take the team record the next day, homering in his sixth straight game to lead his team past the Cubs once again at Wrigley Field. It also marked his 20th longball of the season, the first time he had reached that mark since 2017.

With the team record down, Votto set his sights on the Major-League record of eight straight held by Dale Long in 1956, Don Mattingly in 1987 and Ken Griffey Jr. in 1993. But he had to get to seven first.

After tearing up Chicago, the Reds were off to Citi Field in New York to take on a Mets team making a charge in the NL East.

With the Reds ahead 2-1 in the sixth, Votto zeroed in on a meaty 2-0 fastball from righty Drew Smith and belted it just to the right of the 408-feet sign in centre, making it seven games in a row with a home run.

“I’ve never been in a place like this before,” the Canadian said.

Votto’s streak would come to an end next game, but he was named NL Player of the Month for July two days later.

“Personally, it’s good to know that I still have it and that I can play,” Votto said when looking back on 2021.

“I can perform well and it can come out pretty easy and I can have fun, which is really a gift.”