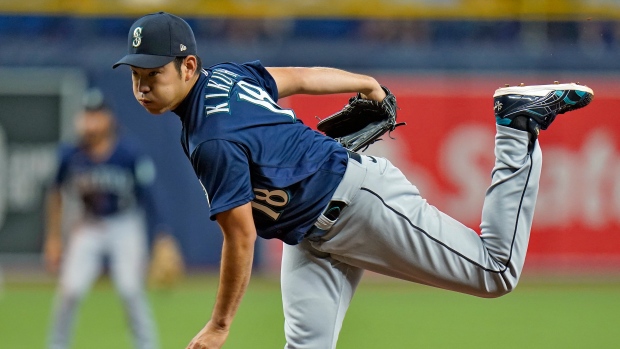 Kikuchi (7-6) allowed two runs and six hits. The lefty had gone 0-3 in his previous four starts.

“I didn't feel like I had my maximum best stuff tonight but I was able to make my big pitches in big situations, especially with my breaking ball, my secondary stuff,” Kikuchi said through an interpreter.

Diego Castillo, the third Mariners reliever, worked the ninth to get his first Seattle save and 15th overall. The right-hander was acquired from Tampa Bay on Thursday.

Seattle has won the first two games of the three-game series and is 6-0 overall against the defending AL champion Rays this season.

“Look, they've got our number, I don't know what else to say,” Tampa Bay manager Kevin Cash said. “We're just not playing very good baseball and they are.”

The Mariners were coming off consecutive walk-off losses last weekend at Texas.

“Just awesome that we have bounced back after a couple of tough losses at Texas,” Seattle manager Scott Servais said. “To come back and play the way we have the last couple of nights I can't just say enough about our crew.”

Randy Arozarena homered for the Rays.

After Cal Raleigh had a second-inning sacrifice fly, Toro and Kelenic connected on solo shots during the fourth off Luis Patiño (2-3) that put the Mariners ahead 3-1.

Toro has three homers and reached base safely in seven consecutive games since being acquired from Houston on July 27. He is hitting .444 (11 for 25) with five RBIs and eight runs in that stretch.

Seattle took a 4-2 lead in the sixth as Toro scored from third when second baseman Brandon Lowe dropped a throw from shortstop Wander Franco on a potential inning-ending double play.

Arozarena homered on the first pitch in the bottom of the first. Tampa Bay got within 3-2 in the fourth when Austin Meadows scored after left fielder Jake Fraley was charged with an error for misplaying Manuel Margot’s single.

Arozarena has three homers in his last four games.

Kikuchi tumbled out of the way when a piece of Nelson Cruz’s broken bat came at him on an inning-ending grounder with two on in the fifth.

The Rays purchased the contract of LHP Dietrich Enns from Triple-A Durham, giving the 30-year old a second chance in the majors. Enns appeared in two games with Minnesota in 2017 and spent part of last year as a player-coach in an independent league. He was released by Seattle in May 2020.

“It’s kind of crazy how it’s come full circle to get called back up against the Mariners, too,” Enns said. “There was time in June last summer when I didn’t have a job in baseball and was going back to school and didn’t know what the future was going to be. Luckily my wife was really supportive of me to stay on board and keep sticking with it.”

Rays: Ace Tyler Glasnow will have Tommy John surgery Wednesday. He has been on the IL since June 15. “I know we wants to be here, I know he wants to be competing but he's got a big career ahead of him,” Cash said. “Most importantly it's the clarity and the peace of mind for Tyler to have the procedure and knowing him he'll bust it through the rehab.” … Reliever Collin McHugh (right arm fatigue) will throw live batting practice Wednesday and could return this weekend.