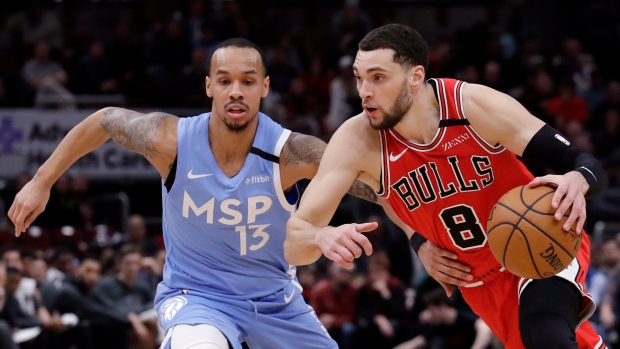 CHICAGO — The Chicago Bulls envisioned Zach LaVine and Lauri Markkanen providing a powerful one-two punch and leading them to the playoffs coming off one of the worst seasons in franchise history.

“I'm a glass-half-full type of (person),” LaVine said. “There's still a lot of games to be played.”

LaVine had seven points in the final 2:25 to help Chicago pull out the win after letting a 19-point lead in the second quarter slip away.

His 3-pointer put the Bulls ahead for good at 111-108 with 1:26 remaining. LaVine then hit two free throws with 26 seconds left. Kris Dunn sank four more foul shots and the Bulls came out on top after losing nine of 12.

Towns scored a season-high 40 points, but the Timberwolves lost their seventh straight.

LaVine, pushing for a spot in the All-Star Game next month in Chicago, hit three 3-pointers. Markkanen, whose scoring and rebounding are down from last season, nailed four from beyond the arc in his highest-scoring game since he finished with 26 points in a loss to Dallas on Jan. 6.

“They're two important pieces,” Bulls coach Jim Boylen said. “They have a responsibility to grow and get better, but also to help us win. They're doing the best they can.”

Towns dominated in his fourth game back after missing 15 because of a sprained left knee. The two-time All-Star made 16 of 24 shots, going 4 of 8 on 3-pointers.

“Like I said before, I just felt I had to get implemented back into the offence," he said. "There was so many things that changed and everything when I was out, I was just trying to find myself in the offence. I think it was taken the wrong way when I said it. I was more saying the plays weren't meant for me anymore, it was different, but the coaching staff did a great job and we talked it out.”

Andrew Wiggins scored 25 points — all but three in the second half. Shabazz Napier added 16 points and seven rebounds.

The Timberwolves tied it at 66 midway through the third quarter on Gorgui Dieng's 3-pointer and grabbed their first lead since the opening minutes when Wiggins nailed a 3 to make it 69-68. The teams kept trading leads until the closing minutes.

Towns, coming off a 28-point effort against Denver on Monday, scored 12 of Minnesota's first 14. But that didn't stop the Bulls from going up by 19 in the first half.

They scored 11 straight points late in the opening quarter to go ahead by 14, then went on a 14-3 run early in the second. Coby White capped that spurt with a layup to make it 49-30 with 5:41 left, but Minnesota pulled within seven at halftime.

“I liked the second half. I hated the first half,” Timberwolves coach Ryan Saunders said. “Bottom line, you are not going to win games like that. We're not a very good basketball team right now.”

Bulls: LaVine has 12 straight games with 20 or more points. ... Dunn made eight of nine free throws and grabbed seven rebounds. ... Markkanen, who has 101 3-pointers, joined Ben Gordon and Kirk Hinrich as the only Bulls players to make 100 or more in each of their first three seasons. ... Felicio's double-double was the seventh of his career and first since he had 14 points and 11 rebounds against Brooklyn on April 7, 2018. ... Chicago's reserves outscored Minnesota's 40-17.

“Fans think it so easy to win in the NBA. It is very difficult. This is the most difficult thing you can think of. No offence, this is not Lifetime Fitness. It is not L.A. Fitness. This is the real thing.” — Towns.