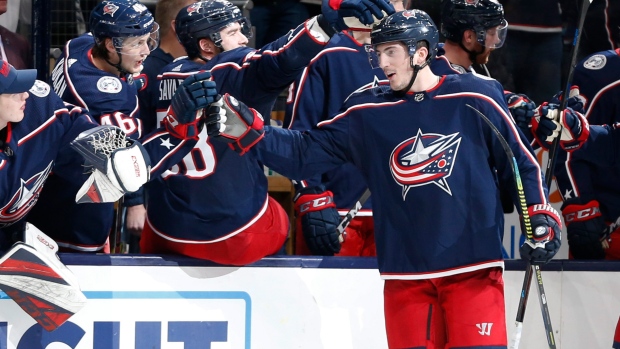 Werenski scored in the first period and twice in the third -- the first hat trick for a Columbus defenceman since 2006 -- as the battered Blue Jackets beat Bobrovsky and the Florida Panthers 4-1 on Tuesday night.

The night also was a triumph for Columbus rookie goalie Elvis Merzlikins, who was thrust into the starting role after Joonas Korpisalo was injured in the first round of a shootout with Chicago on Sunday night. Merzlikins had played in 10 games this season, started four, and had yet to win one.

He stopped 36 shots in front of a sellout home crowd and kept Columbus in the game when they were being outplayed by the Panthers, particularly in the second period.

“Finally it came,” he said. “I had 10 shots to do it, so finally it came. I really appreciated just seeing my teammates in the last seconds, even at 4-1, they were blocking shots because they knew how important it was for me to get that first win.”

The Blue Jackets served up a rude welcome for Bobrovsky, who was making his first appearance in Columbus since leaving as a free agent last summer. Bobrovsky, who played in Columbus for seven seasons and won two Vezina Trophies, had 24 saves.

It was an emotional trip back for him.

“Lots of memories,” he said. “Went to my old apartment. Cried a couple of times there. It’s tough. Seven years is a lot.”

The Blue Jackets won for the first time in three games, but extended their points streak to 11 games (7-0-4). They're missing at least 10 players with various injuries and may have lost another, forward Alexander Texier, on Tuesday. The rookie left the game with an upper-body injury in the first period and didn't return.

Werenski got to his friend Bobrovsky first at 4:54 of the first period, scoring off the draw with a slap shot from the top of the left circle that zoomed over the goalie's glove.

Colton Scevior tied it for the Panthers when he deflected a shot from the blue line by Anton Stralman 3:39 into the second.

Jenner got his eighth goal of the season on a power play later in the second period, a shot from a crowded slot that got between Bobrovsky's pads. That made it 2-1 Columbus.

Weresnski got his second of the night at 4:13 of the third period with a shot from the left circle that caught Bobrovsky out in front of the crease. Florida unsuccessfully challenged it, claiming goalie interference because Nick Foligno had contact with Bobrovsky. Werenski made it 4-1 with his third tally, another from the left circle.

“It was pretty cool,” said the 22-year-old Werenski, who doesn't remember if he's ever had a another hat trick in his life. "After I scored that third goal I kind of looked at the crowd and just saw hats coming down. I’ve never had that feeling before.”

With a lineup filled with guys who started the season in the minors, Columbus coach John Tortorella said he'd been relying on veterans like Werenski to take on more responsibility.

“The last few weeks we’ve asked him and (defenceman Seth Jones) to lead the way," Tortorella said. "He’s been aggressive offensively for quite awhile. Nice to see the pucks go in for us tonight.”

NOTES: Jenner also had an assist, on Werenski's second goal, and Alexander Wennberg had a pair of assists. ... Bobrovsky got a standing ovation from the sellout crowd at Nationwide Arena during a first-period scoreboard tribute. ... Columbus F Nathan Gerbe played in his 400th NHL game.

Panthers: At Ottawa on Thursday night.