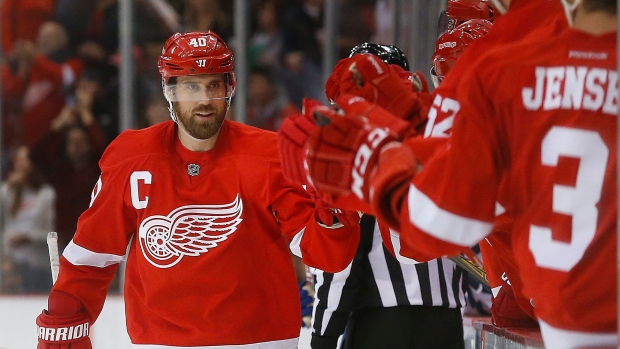 Zetterberg's goal came on a tic-tac-toe play with Gustav Nyquist and Mike Green at 3:57 that left Toronto goaltender James Reimer down and out with no chance to stop the puck.

"They're a good squad over there, they can make plays," said Reimer, who finished with 26 saves.

Justin Abdelkader, Drew Miller and Brad Richards also scored for the Red Wings (5-0-2), who got a 31-save performance from Jimmy Howard.

James van Riemsdyk and Mark Arcobello supplied the offence for the Maple Leafs (3-4-0).

"I thought we did lots of good things," said Leafs coach Mike Babcock. "I thought we were heavy in the offensive zone, created traffic. We still made mistakes, gifting goals a little bit, but we'll fix that."

The Leafs dressed mostly veterans, with only prospects Zach Hyman and Kasperi Kapanen in the lineup. The 23-year-old Hyman had 13:23 of ice time and recorded one shot on net. Kapanen, 19, played 14:44 and earned an assist on Arcobello's power-play goal.

Hyman, who Babcock became familiar with when the forward played for the University of Michigan, impressed his coach with his style of play against the Wings.

"I thought he was great tonight," said Babcock. "Tonight he reminded me of when he was at Michigan. I thought he was one of our better players. ... Hyman skates so good and plays heavy, he could be effective."

Van Riemsdyk put the Leafs ahead just 1:09 into the game. Abdelkader responded just over a minute later and Miller gave the Wings a 2-1 lead at the 5:21 mark.

Arcobello tied the game on the power play at 19:28 of the second period before Zetterberg put Detroit ahead for good 3:57 into the third. Richards added an empty-net goal to seal the win.

Detroit went 0 for 2 on the power play while Toronto scored once on two chances with the man advantage.