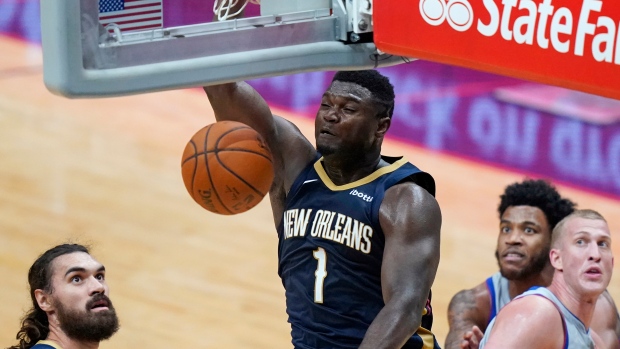 NEW ORLEANS — Zion Williamson scored 32 points in his first game since being named a first-time All-Star, and the New Orleans Pelicans beat the Detroit Pistons 128-118 on Wednesday night.

“I didn’t know I was supposed to feel different, to be honest, because everyone’s been asking that," Williamson said in reference to how All-Star recognition affected his mindset on the court. "If you know me, my goal is to go out there and try to win every game. Is it going to happen like that? Maybe not, but I just want to go out there and win and have fun with my teammates and enjoy each moment.”

Williamson had many highlights to enjoy against Detroit.

There were several quick, dribbling spin moves to elude multiple converging defenders in the paint before he finished near the rim with floaters or layups. There were also thunderous one-handed dunks on cuts down the lane or along the baseline. One of his flourishes featured his throw down of Lonzo Ball's alley-oop lob.

Williamson made 13 of his 18 shots in reaching the 30-point threshold for the eighth time this season.

Pelican centre Steven Adams said than an “obviously super-talented, super-skilled player” like Williamson has "a lot bigger goals than just the All-Star game, right? It’s a good little stepping stone for him, but I have a feeling he’s not finished.”

Adams scored 14 points and grabbed 15 rebounds in his first action since missing two games with a sore right ankle. His putback gave the Pelicans a 121-111 lead with 2:15 left.

The Pelicans' strong finish came after they'd trailed most of the first three quarters before thwarting the Pistons' bid to win two road games in consecutive nights.

Josh Jackson scored 25, and Mason Plumlee added 21 points for Detroit, which led by 10 in the first half and nine in the third quarter. Saban Lee and Saddiq Bey each scored 13 points.

“We couldn’t buy shots at the right time, but I was overall pleased with our approach,” Pistons coach Dwane Casey said. “For whatever reason, we ran out of gas down the stretch.”

The Pistons looked sharp early, combining for nine 3s and shooting 53.1% overall (26 of 49) in scoring a season-best 69 first-half points.

Detroit got 36 first-half points from reserves including 10 from Jackson and nine from Svi Mykhailiuk on three 3s.

Detroit was up by seven late in the half before Williamson scored on a dribble drive in the final seconds of the quarter to make it 69-64.

Pistons: Fell to 3-15 on the road. ... Wayne Ellington started after resting a night earlier in Orlando. He had seven points and three assists in 24 minutes, missing six of seven 3-point attempts. ... Mykhailiuk finished with 12 points and Dennis Smith Jr. scored 12. ... Sekou Doumbouya was limited to 22 minutes in part because he was called for his fifth foul half way through the third quarter. ... Detroit went 13 of 37 from 3-point range.

While Pelicans coach Stan Van Gundy credited his club's late-game defence in their previous two games — both victories — he said his team is far from a finished product on that end of the court.

“It’s going to take a lot more defensively," Van Gundy said. "We don’t have enough sense of urgency on a consistent basis yet. We haven’t built that habbit. I’m not sure we think of ourselves as a defensive team. ... Our defensive mentality and execution still has a ways to go.”