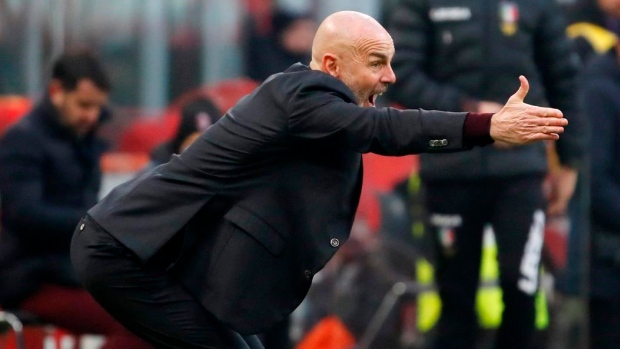 MILAN — The Zlatan Ibrahimovic factor is plain to see at AC Milan.

While it might be too early to say that the veteran forward has turned Milan’s fortunes around since returning to the Rossoneri, he has certainly revitalized the team.

Milan is playing with renewed energy since Ibrahimovic’s arrival, even when the mercurial Swede isn’t on the field.

The signs were there in Ibrahimovic’s first match back, when he came on as a substitute in a 0-0 draw against Sampdoria. He then scored one and had another disallowed in a 2-0 win at Cagliari.

Ibrahimovic was an unused substitute in Wednesday’s Italian Cup victory over Spal but he was constantly giving advice to teammates and was also the first on his feet to applaud each of the goals in the 3-0 win.

“Ibrahimovic is a very important player for us and we brought him in also to give us this shake-up that we needed,” technical director Paolo Maldini said. “He is a leader, an important player. He is still good enough to play at the top level and he has shown that already.”

Ibrahimovic will be eager to score in front of his home fans when Milan hosts Udinese on Sunday with only one point separating the two sides.

And Milan coach Stefano Pioli has warned that there is still a lot more to come from the 38-year-old striker.

“We’ll see the real Ibrahimovic after a few games,” Pioli said. “He wants to prove that he is still up to the challenge, working like this he will certainly do well for everyone.

“He hadn’t played for a while but he is very helpful and positive to his teammates. He can’t do anything but improve.”

Ibrahimovic is even winning around his detractors.

Fellow new signing Simon Kjær has played against Ibrahimovic several times. The last time they met, in a Europa League match between Manchester United and Fenerbahce in 2016, Ibrahimovic grabbed Kjær by the throat and the duo had to be separated by José Mourinho and a match official.

“Ibra is someone who gives you something extra, not just on the pitch but also mentally,” Kjær said on Thursday. “Ibrahimovic and I have had our battles on the pitch but there are no problems. It’s a boost to all of us to have him in the group.

“There’s no need for me or any other footballing person to say how good he is. Everyone knows that even at 38 years old, even not having the same physique he had 10 years ago, he can still make the difference.”