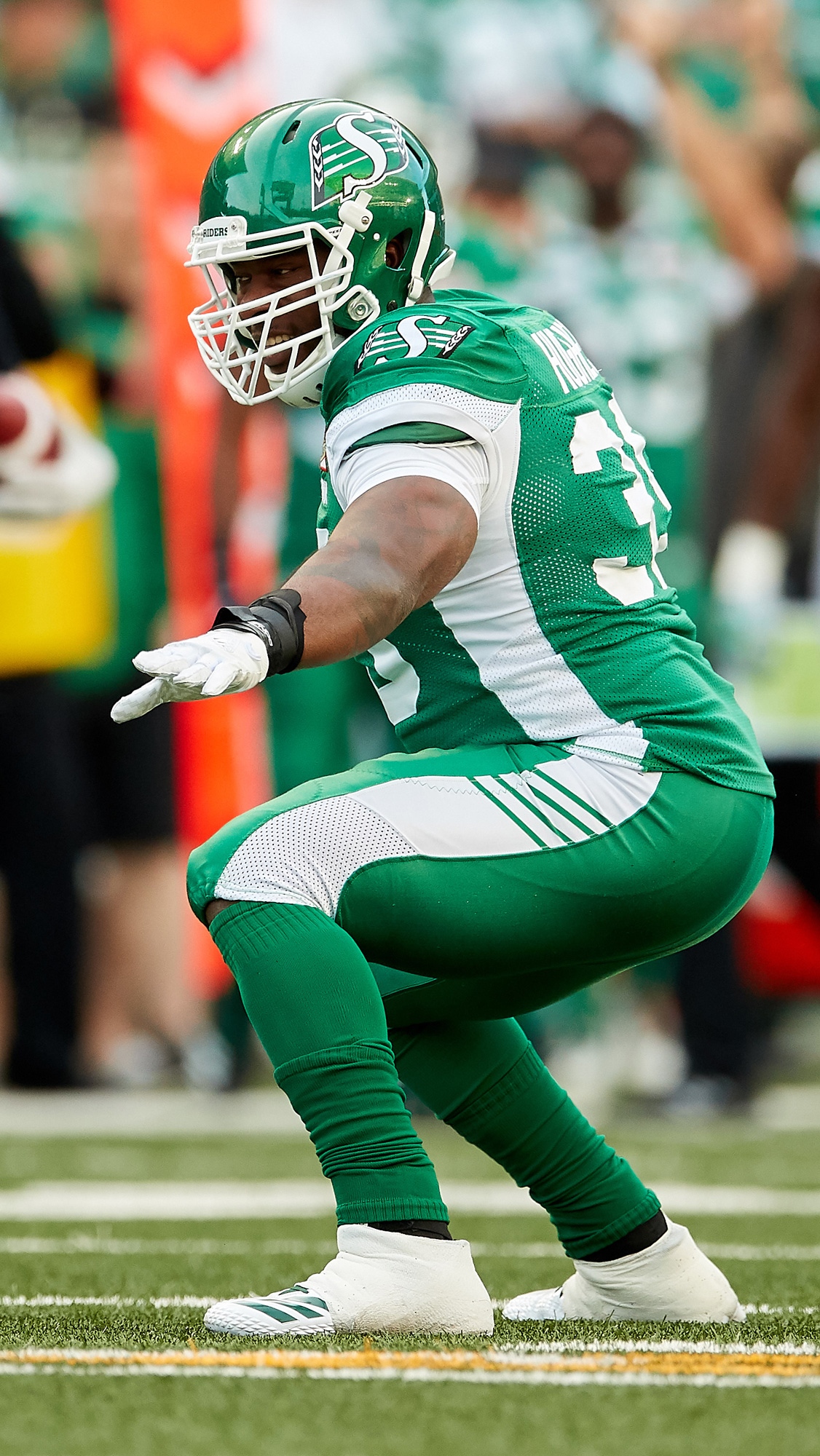 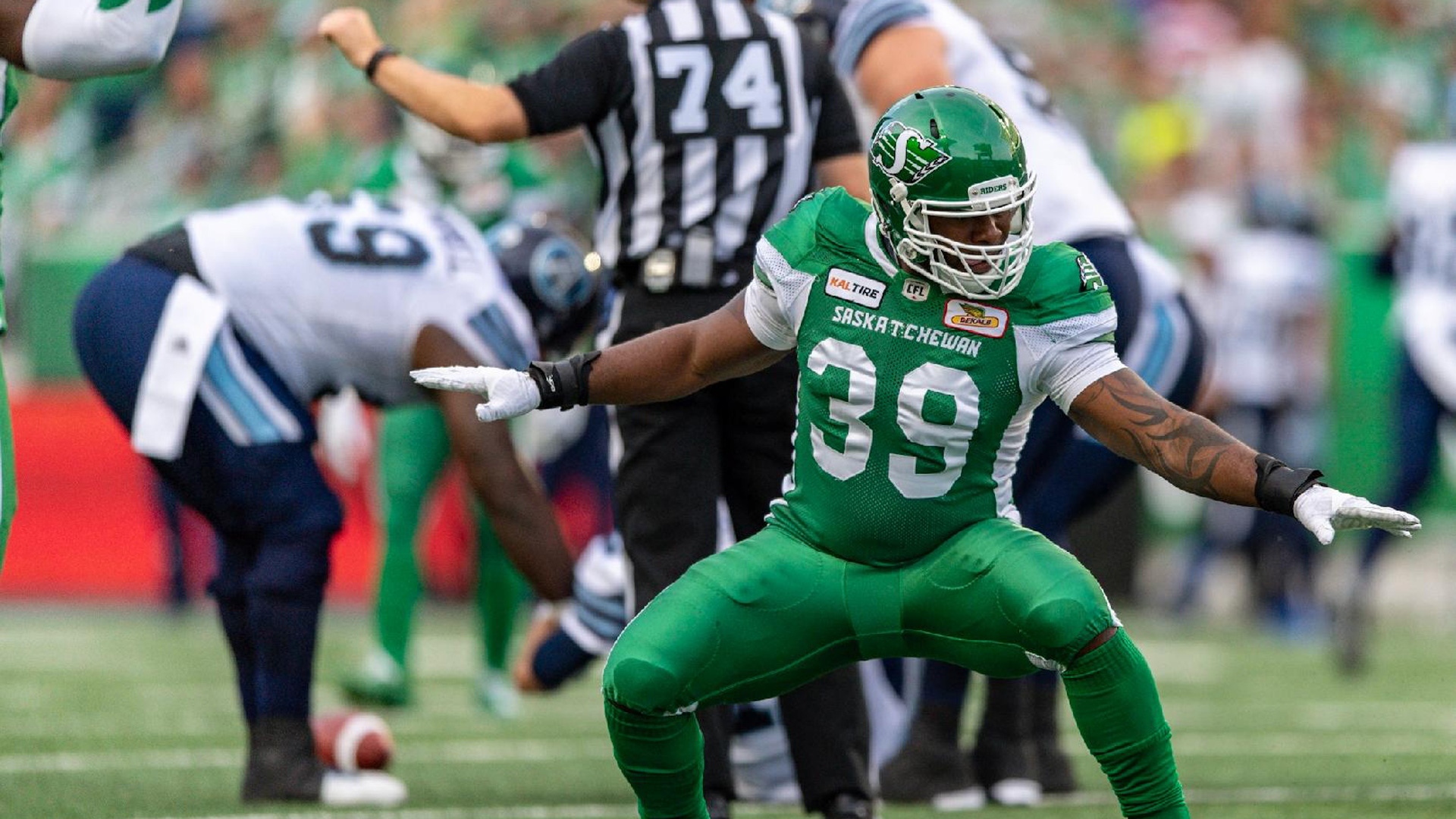 After another standout season in which Charleston Hughes finished with 16 sacks and was named a West Division All-Star, TSN Football Insider Dave Naylor tells the story of how the 35-year-old got his start in the CFL, speaking with former and current teammates and coaches who have benefited from his play along the way. 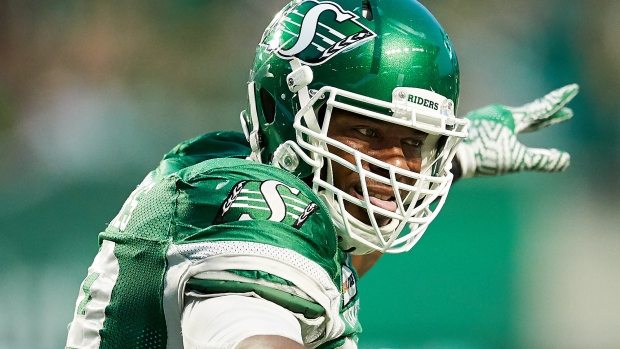 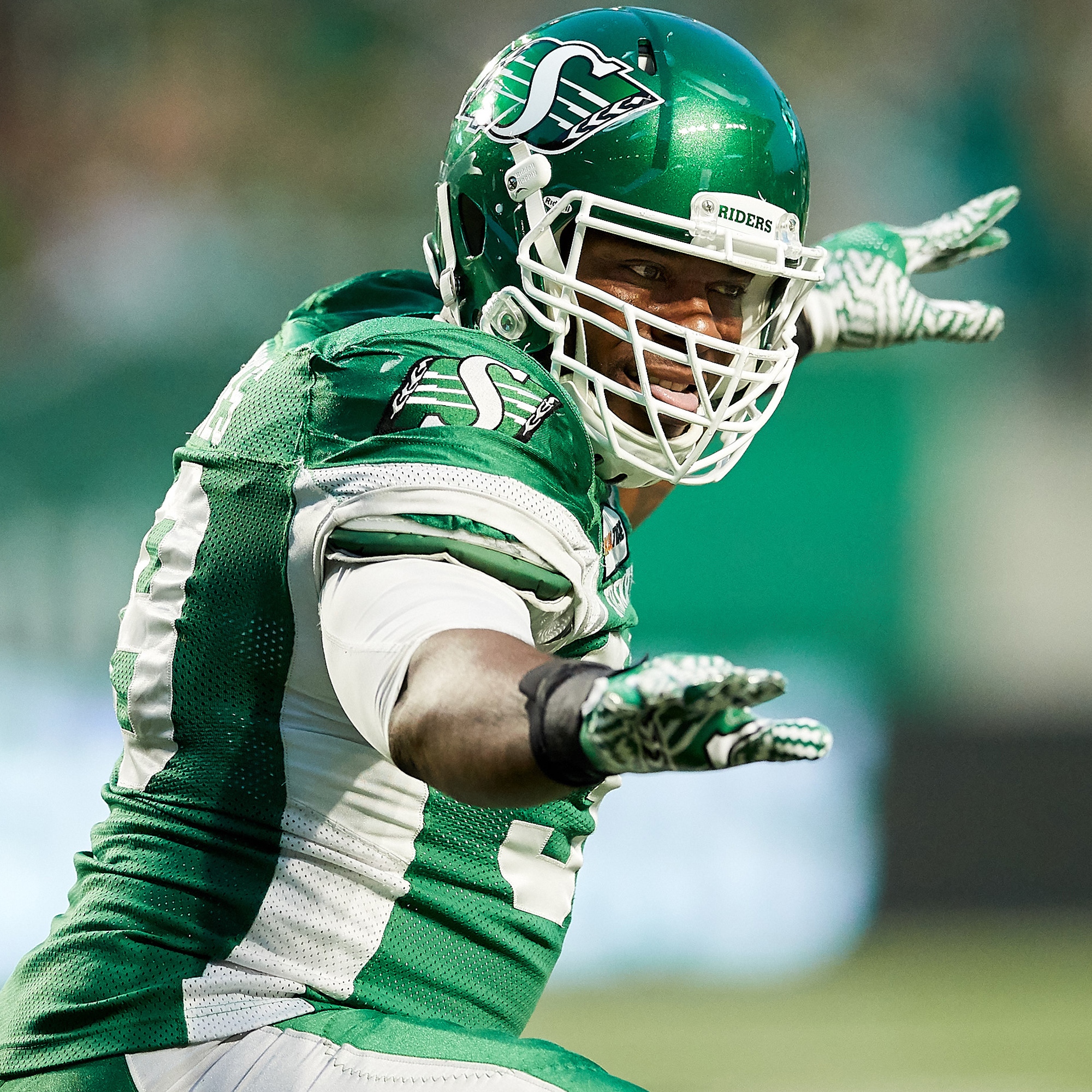 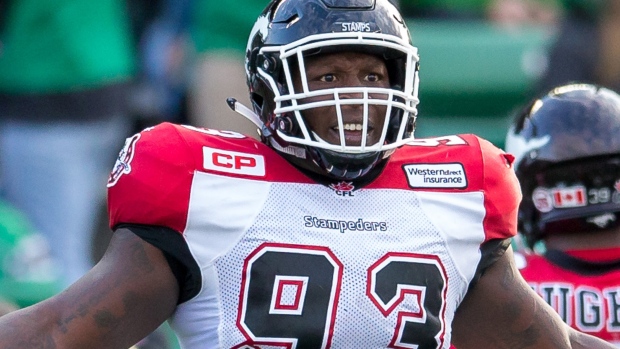 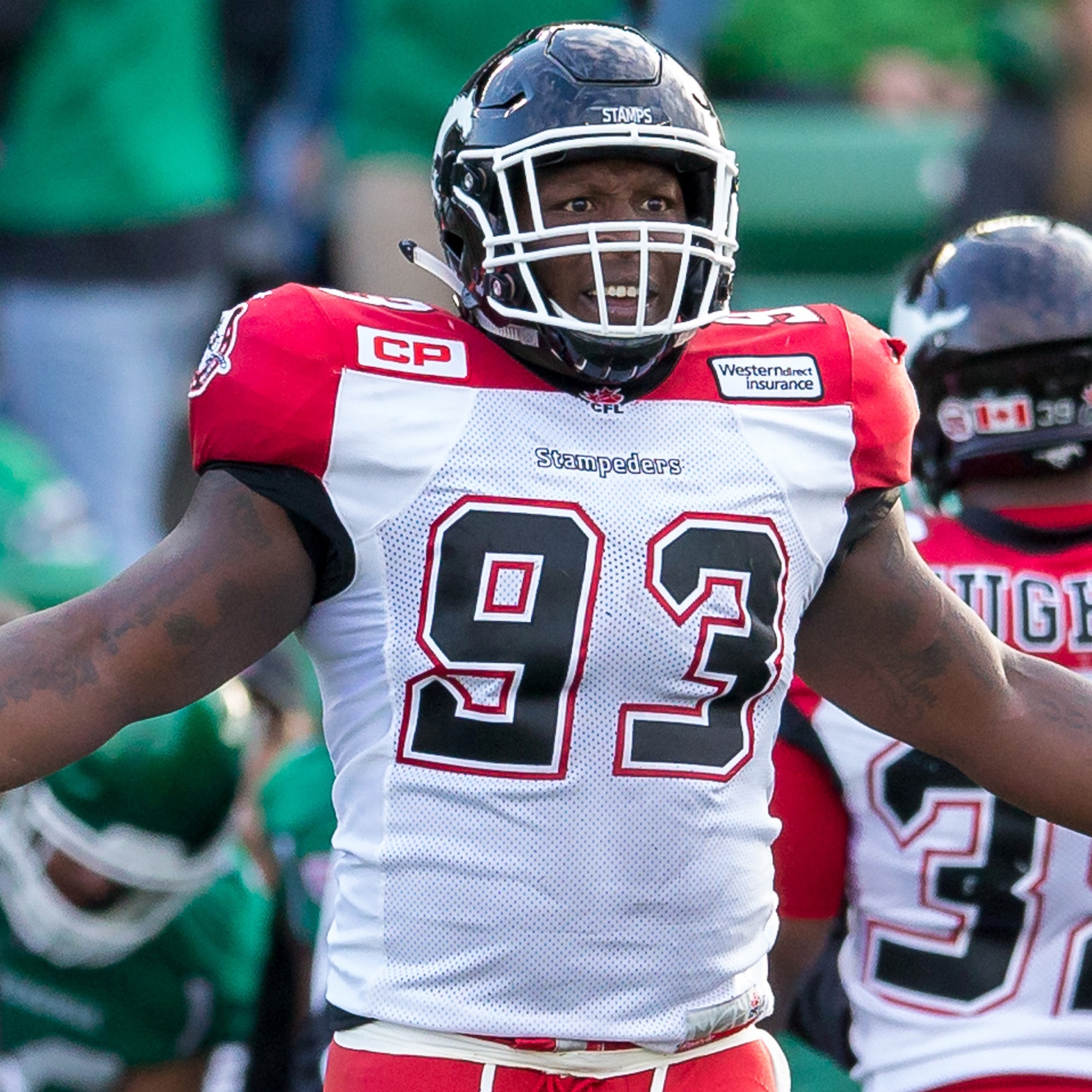 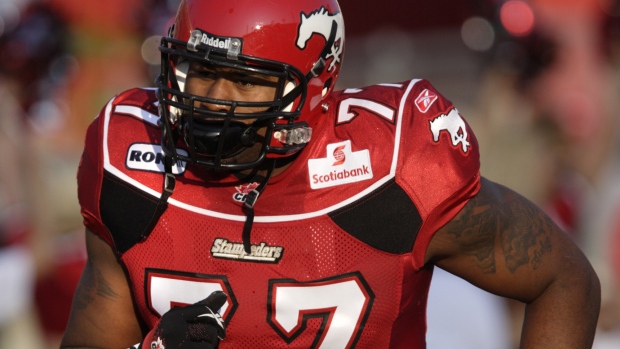 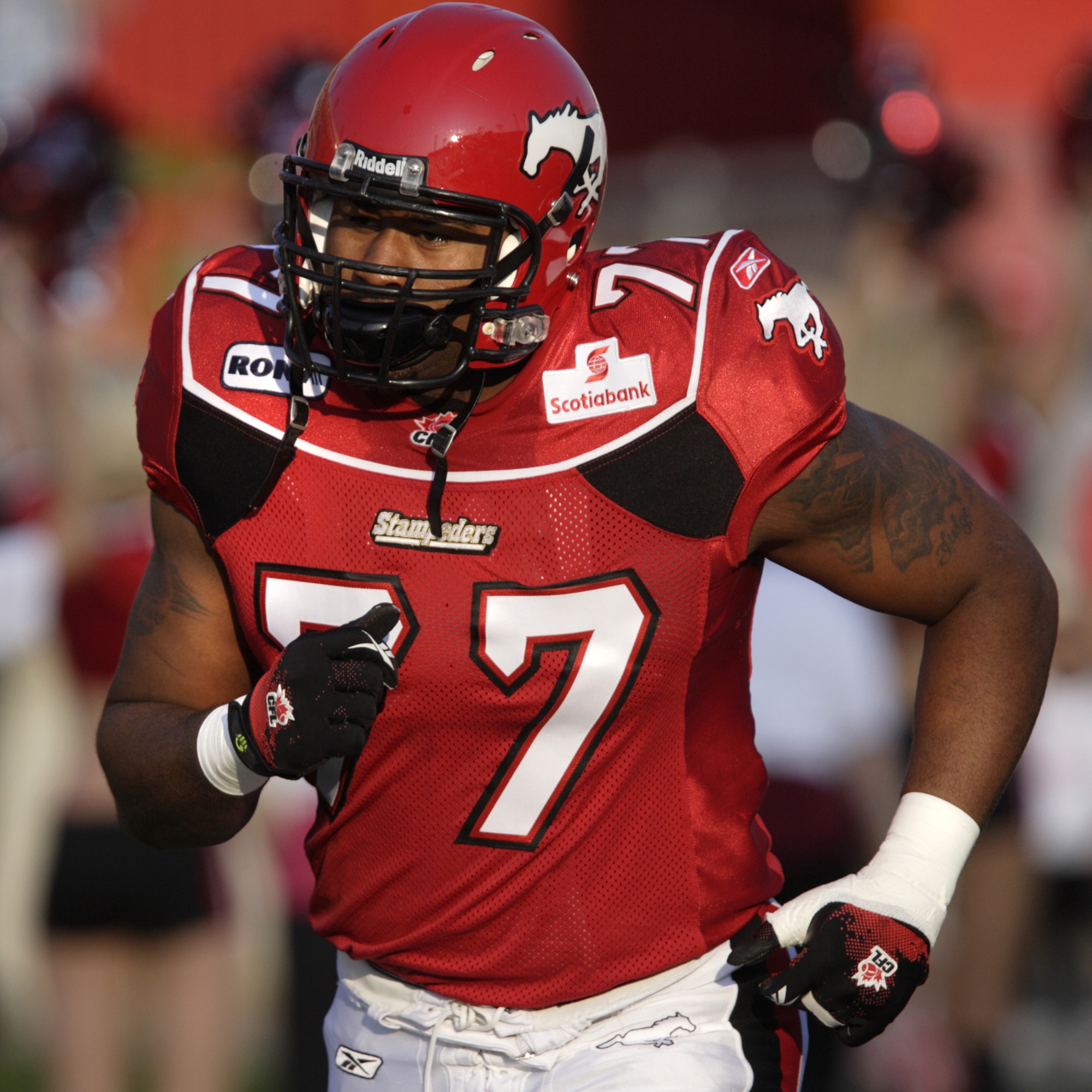 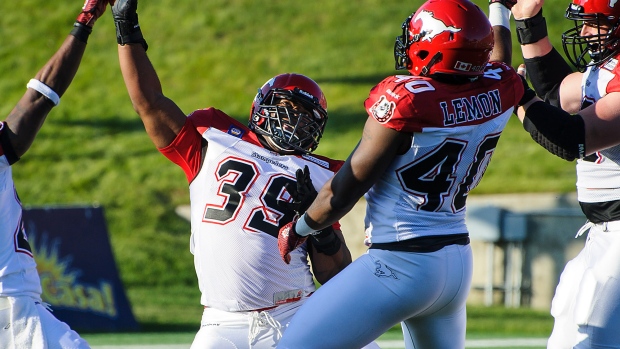 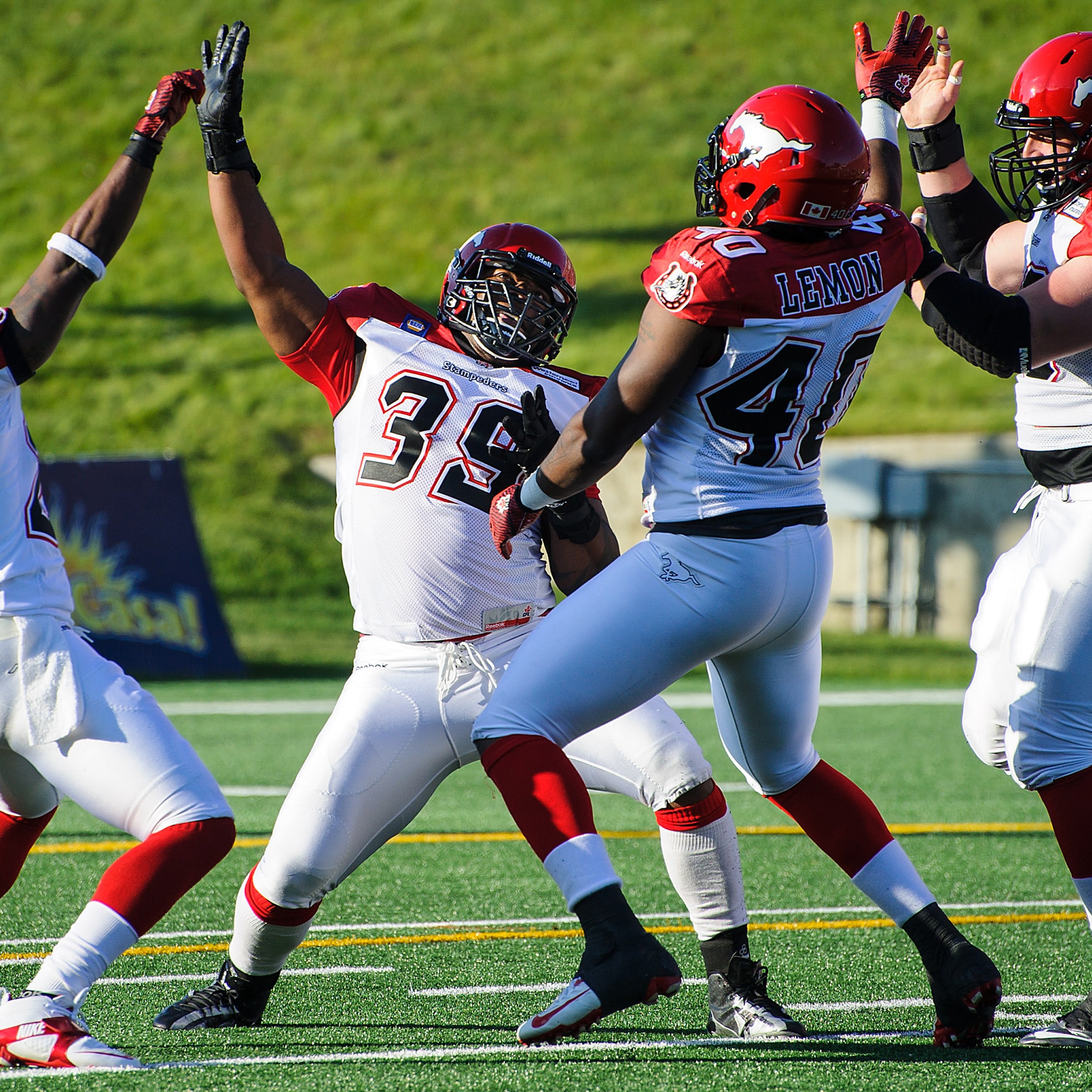 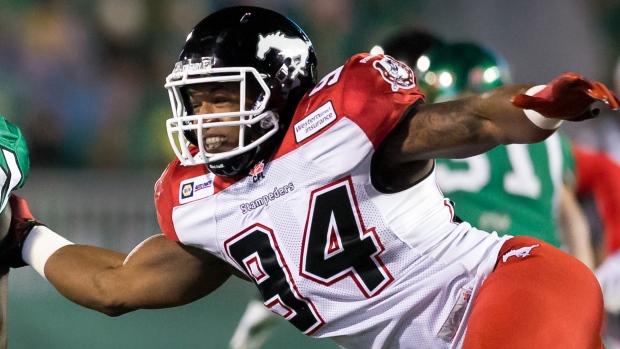 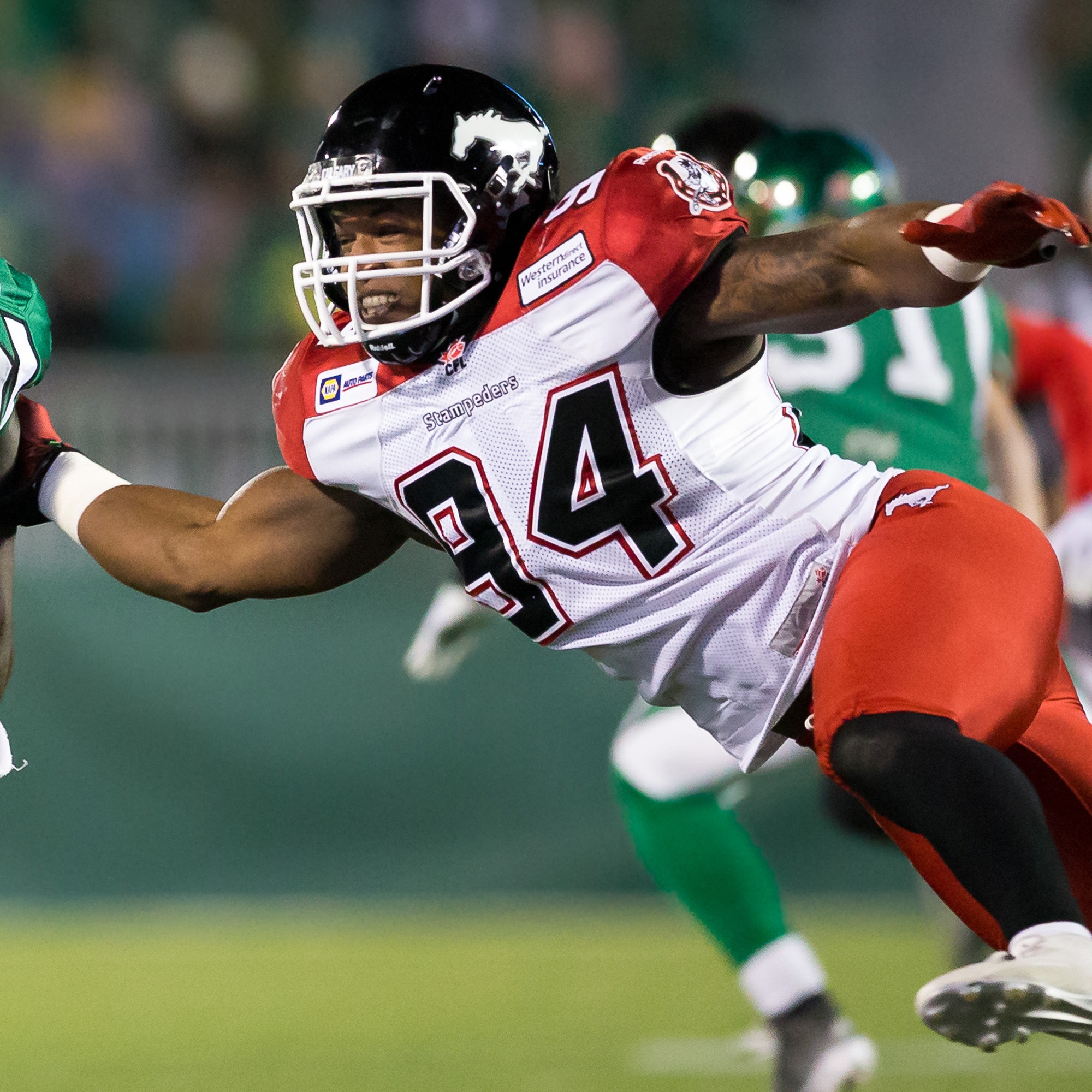 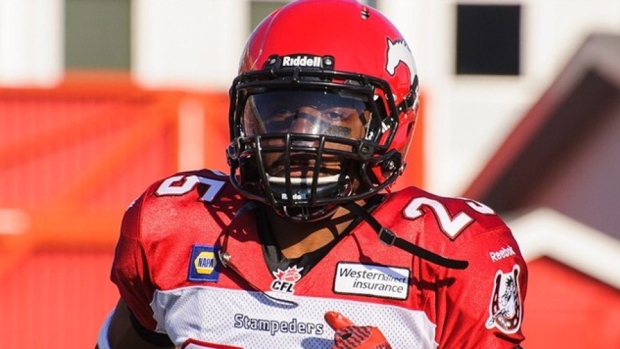 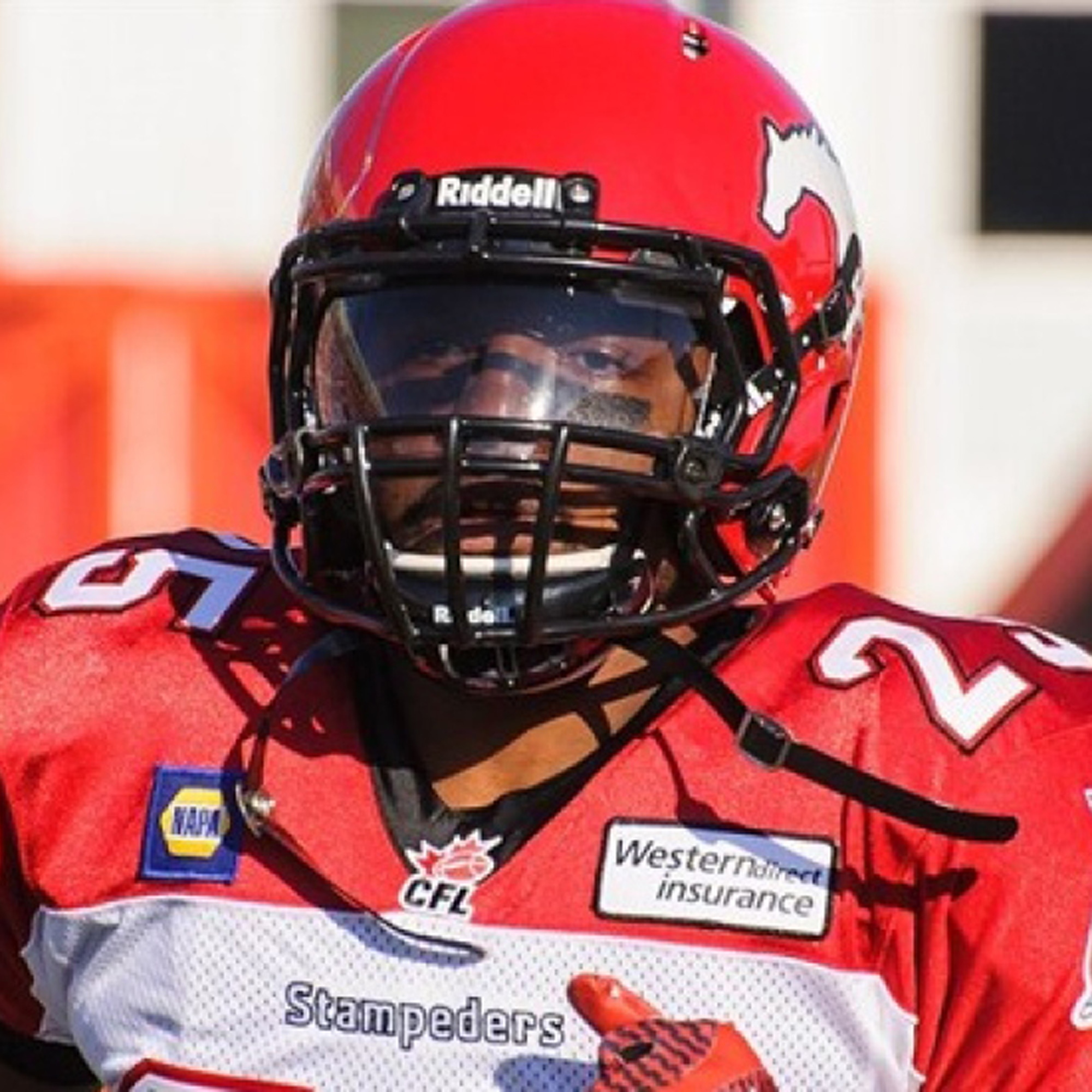 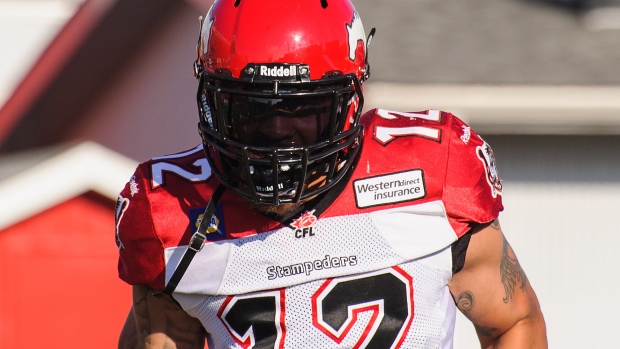 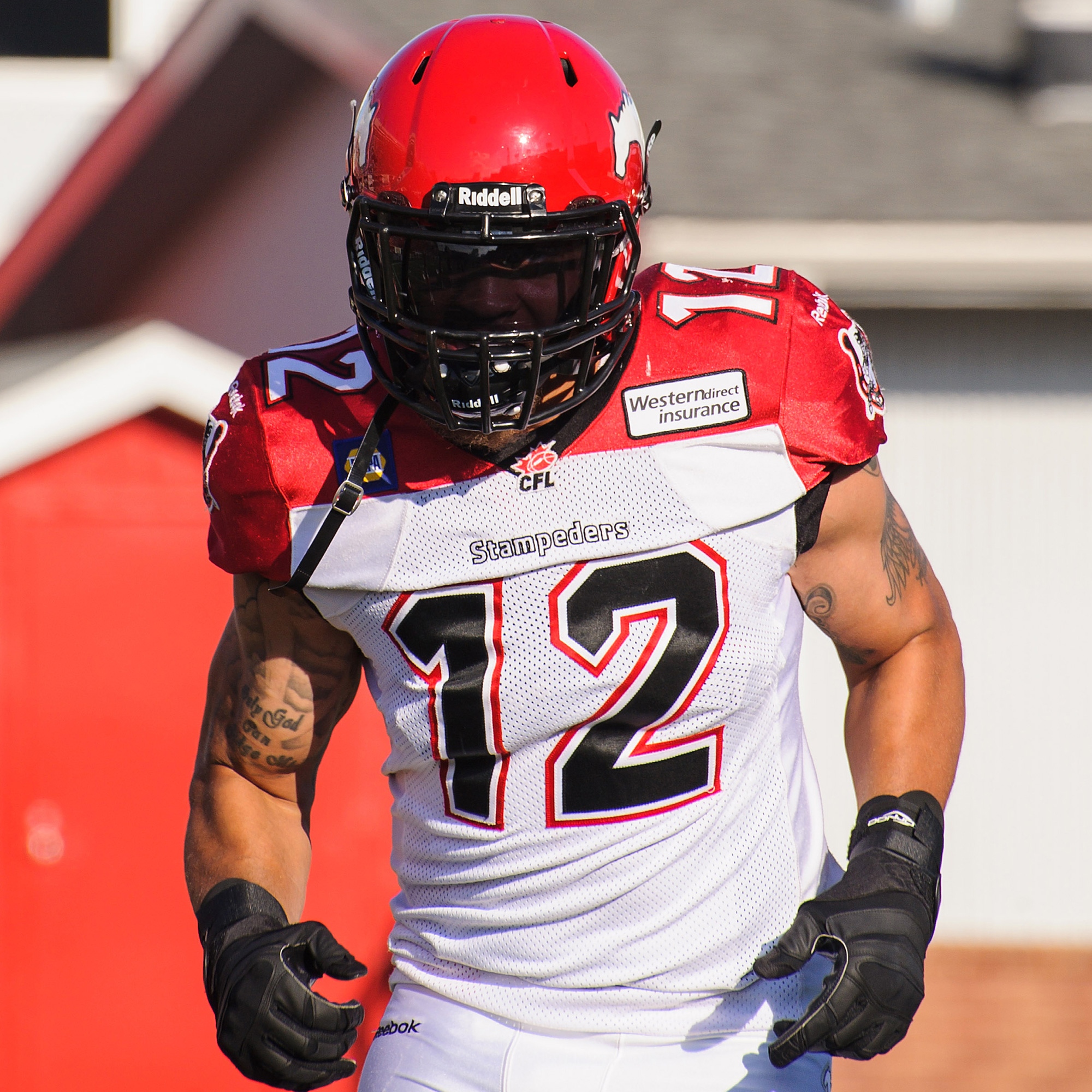 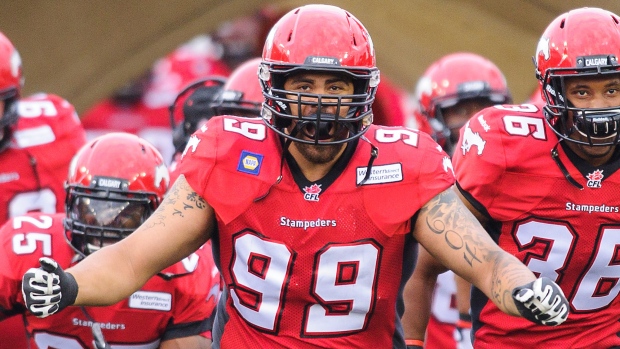 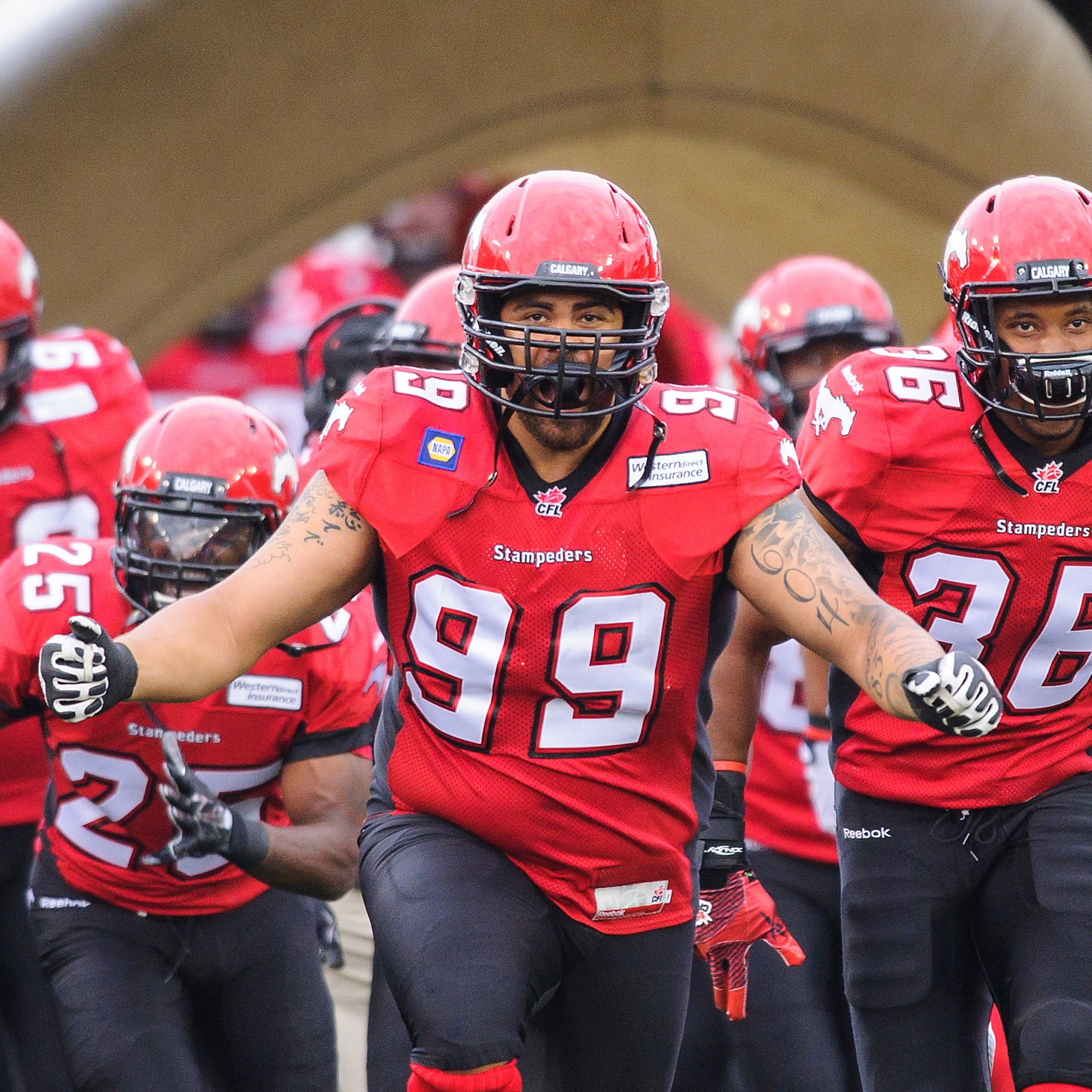 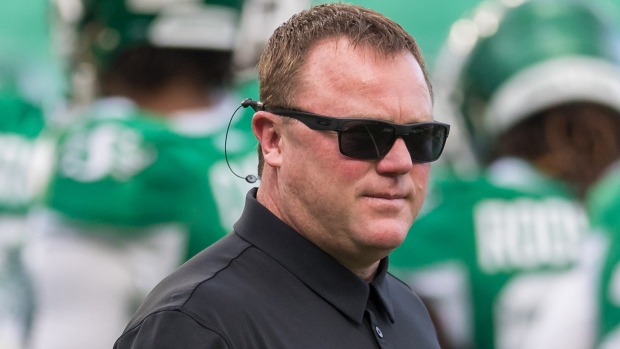 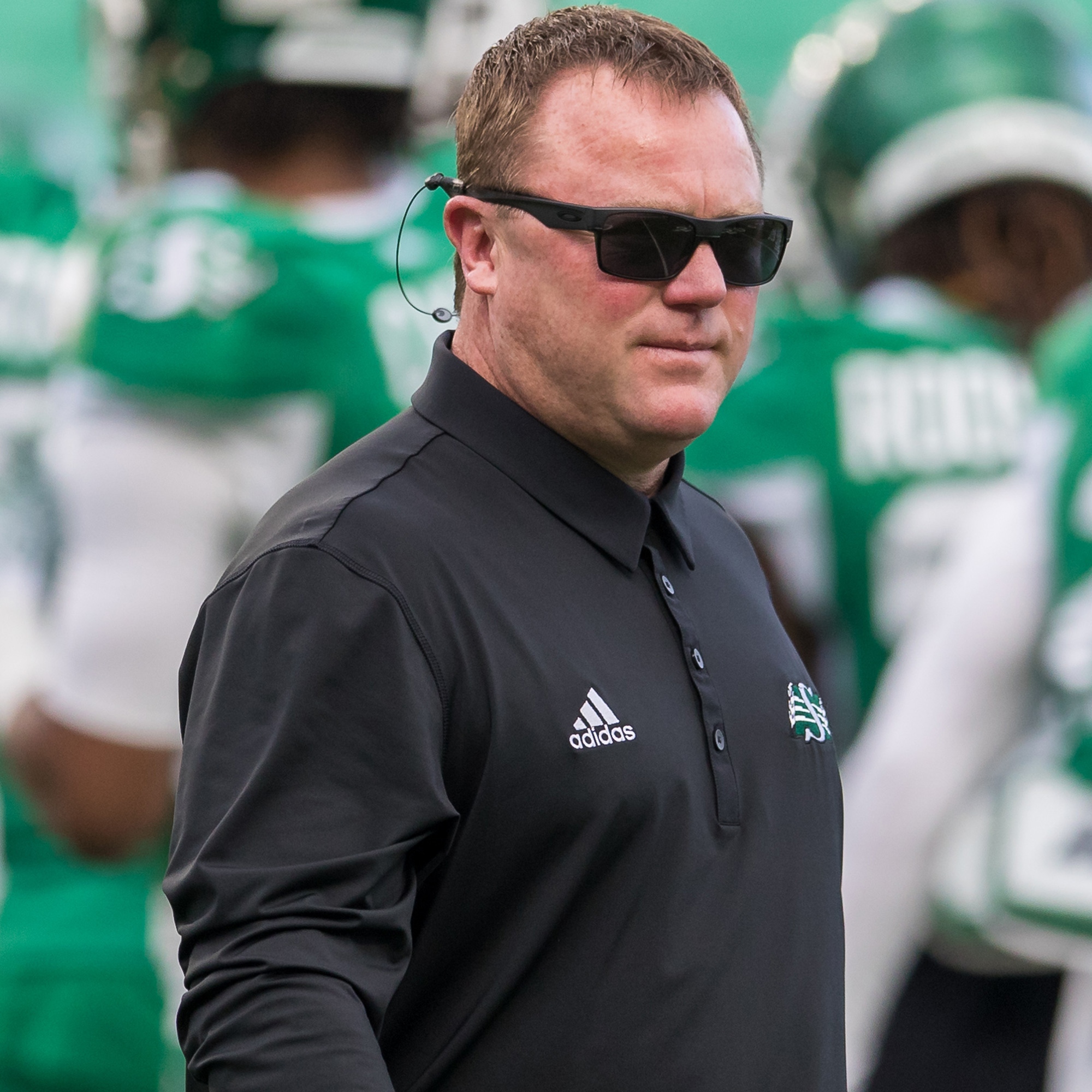 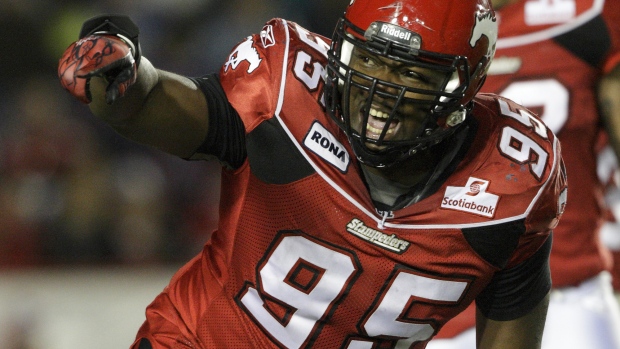 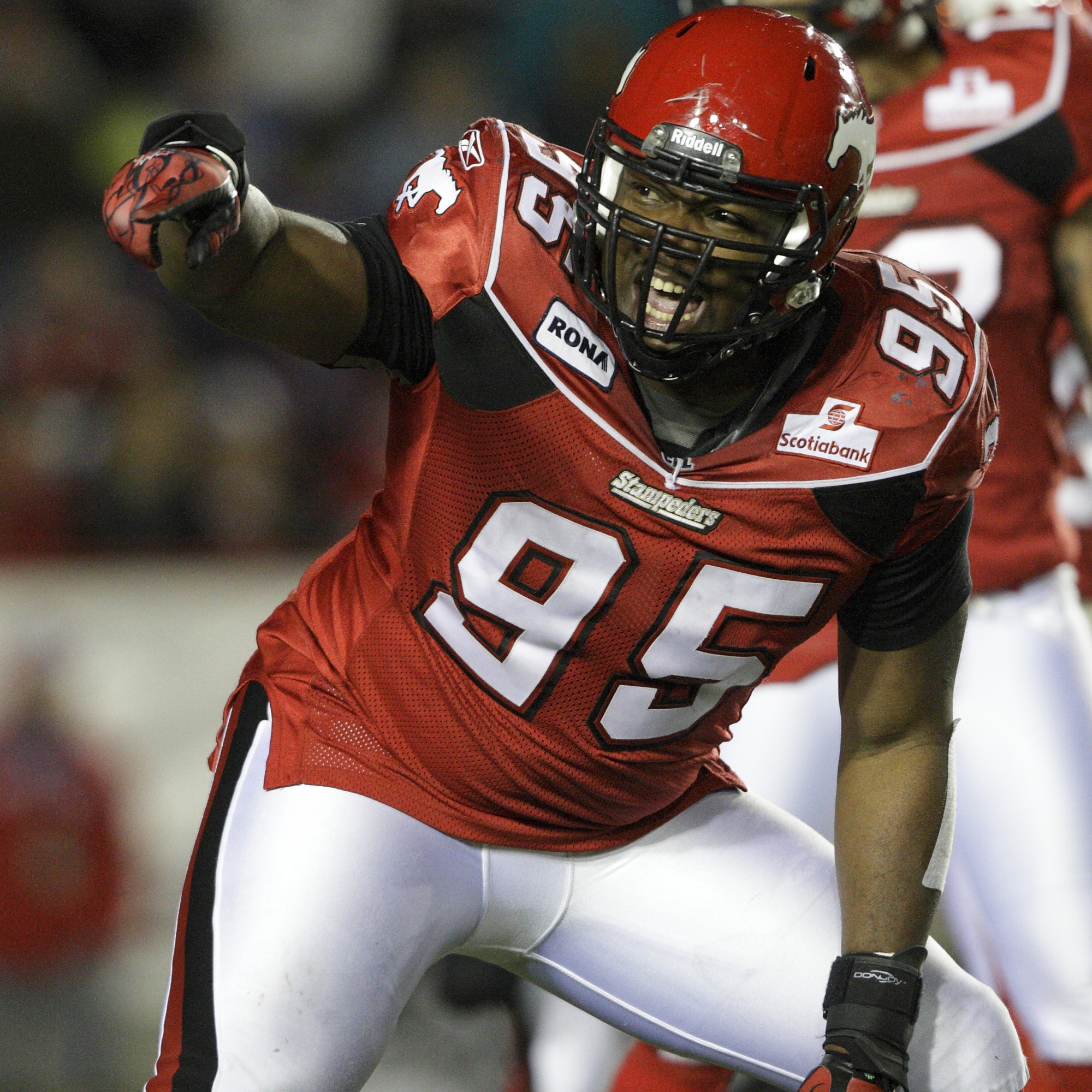 Great careers in the Canadian Football League sometimes begin in the most humble of ways.

And so it was that Charleston Hughes attended a free-agent workout in Detroit back in 2008, where a young scout for the Calgary Stampeders was in attendance.

John Murphy, now the vice-president player personnel for the Toronto Argonauts, barely had his feet wet in Canadian football when he attended the workout that day. But he’d heard that his team’s new defensive co-ordinator, Chris Jones, loved athletic defenders who might end up as either linebackers or defensive ends in the CFL.

“Charleston was one of the guys who lines up with his group and he runs a 40 in the mid-to-high four-fives. He was a linebacker but I knew in the CFL game he had enough size to be a pass rusher,” Murphy said. “So as soon as he skirts past me, I turn around and it’s a `who are you and where are you from?’ kind of thing. I asked him what he played and he said `mostly linebacker but yeah, I can rush the passer.’”

Little did Murphy know, he’d just stumbled upon one of the CFL’s all-time great pass rushers.

“I got on the phone and called (then-Calgary player personnel director Jim Barker) and said `I don’t know how this negotiation list thing works but there’s a kid here who is 6-foot-1, 240, just ran four-fives twice and is a thoroughly explosive athlete. Take it for what it’s worth but I’m here and he’s right in front of me.’”

Murphy also noticed that Hughes had come from an NCAA Division II school called Northwood, located in Midland, Mich. about 100 miles from Detroit. It was the same school that had produced Chris Wilson, a former BC Lions defensive lineman who was then playing with the NFL’s Washington Redskins.

“When he told me he’d played at Northwood that hit my ear because there was a Northwood guy who’d excelled in the CFL. So it wasn’t like this was a crazy scenario that this guy might be a guy.”

The Stamps added Hughes to their negotiation list. A few months later he arrived at training camp, shifting between linebacker and defensive end as he competed for a spot. But as so often happens, Hughes got caught in a numbers game and the Stamps ended up cutting him.

“My dumb ass sent him home and we kept a guy named Fontaine Hunter,” said Jones, now a defensive assistant with the NFL’s Cleveland Browns. “(Hunter) got hurt in game 1, Charleston came back and the rest is history.”

Perhaps there is no greater testament to Charleston Hughes than the fact that he has never played on a team with a losing record during his 12-year career.

One hundred and thirty sacks after the Stampeders sent him home at the end of his first training camp, Hughes continues to make his teams and the players around him better.

"I learned everything from him, to be honest. When I came to the CFL, I'd never played defensive line before. I was really raw, strong and physical, but as far as being able to pass rush and understand what offensive linemen are trying to do to block ... he broke it down for me, all of that. Ain't no doubt about it.

I definitely think he opens things up for his counterpart. Look at every defensive end who has played across from him. They ball out. That's no coincidence."


Johnson is a three-time CFL All-Star (2016-18) and signed a big money free agent deal with the Saskatchewan Roughriders for 2019. He has 45 career sacks in the CFL, 31 of which came with Hughes as a teammate.

"My first experience with Charleston was when he came back mid-season from the NFL (in 2009). I was looking at him and thought, ‘He looks okay,’ but he dominated. He killed it. He was a definite impact on defence. I've kept up with his career. He's a guy who can do everything, but people don't account for that he's so football savvy and he knows how to set people up. I remember I didn't think he was as strong as he is because he can maul guys right back into the quarterback. He's very versatile, with his quickness, speed and power, but his smarts are what give him the edge.

Double-digit sacks for a defensive lineman are hard. For him to do it so consistently and so effortlessly, it's amazing. He's a guy who, when he steps on the field, he gets extra attention and the blocking slides his way so other guys end up having double-digit sacks because of the Charleston effect. The protection slides so someone else has an opportunity for one-on-one, or they have to keep someone in to help protect or the running back has to chip him. He definitely is a guy who needs extra attention and that provides opportunities for other guys to benefit from."


Johnson was a 2010 West Division All-Star and played eight years in the NFL following his time with the Stampeders.

"He helped me out a lot. He helped me elevate my game with angles in pass rush. Don't have to be the fastest or the quickest … it's all about his angles and how he lines up to offensive lineman. If he can get to that spot before they do, he’s pretty successful at what he does."


Lemon was a 2016 East Division All-Star and has gone on to play with the Ottawa Redblacks, Saskatchewan Roughriders, Toronto Argonauts, and BC Lions after his time with the Stampeders. He had 16 sacks in his two years in Calgary.

"I learned a lot from him, the small things, how to watch film ... he was leading the way for me. He plays with a lot of joy. He loves playing the game. Nowadays people love to point out a player’s age, but he's still playing at a very high level and I think a lot of that has to do with how much he loves the game and how much he plays with joy."


Beltre signed in the NFL after three seasons with the Stampeders. He returned to the CFL and has spent the past two years with the Toronto Argonauts.

"He makes everyone around him 100 per cent better and I think he's definitely had a hand in other guys getting opportunities to make plays. The guys that were the bookend to him would always get 10-15 sacks because those guys were taking on one block when he's facing double teams. Charleston’s style is unique and he's learned how to manage his craft so well. People try to take a move or two from him, but it's hard."


Raymond was a two-time West Division All-Star (2011-12). He played eight seasons with the Stampeders.

"Look at the record of his former teammates, especially the defensive ends. Her's gotten a lot of guys paid. No shot at those guys but when you have to slide protection to focus on a one-man wrecking crew, it definitely makes it easier."

"His personality keeps it light. But when he speaks football people listen. One thing people don't appreciate about him is that he’s a student of the game and puts in his time watching film. He knows when things are coming. You don’t catch him off-guard. He does his due diligence and he’s a very smart football player. Doing what he’s doing at his age is insane … but I’m not surprised."


Mace spent three seasons in the NFL before playing six seasons with the Stampeders, and finished with 44 tackles and four sacks in the CFL.

"He plays with such great awareness and confidence. He makes everyone, including coaches, better. Great players like Charleston make coaches look smart."


Jones has won Grey Cups as both a defensive coordinator and head coach. He is currently a defensive assistant with the NFL's Cleveland Browns.

"We were roommates as players and then I moved out when I became a coach … I called him and said `Charleston we need you to add a spin move to your game’ and he said ‘I’m not a spinner.’ I said you will get double-digit sacks consistently because you’ll have a complete rush package. He said he didn’t want to do it, his hips were too stiff. But I said we’ll teach you and we drilled it and drilled it and now he spins like a top.”