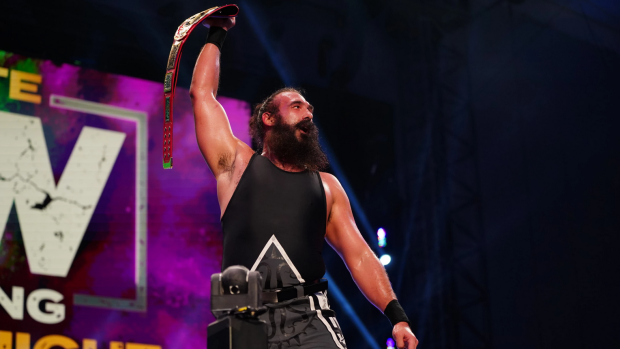 Wednesday night's AEW Dynamite will be dedicated to the memory of Jon Huber aka Brodie Lee who died at the age of 41 on Dec. 26 due to a severe lung issue.

Huber's death brought with it an outpouring of grief and a celebration of his life throughout the wrestling industry and Wednesday night's card will continue that celebration with matches featuring his friends and contemporaries. The card will honour not only Huber himself, but also his wife, Amanda, and two children, Brodie and Nolan, and feature members of Huber's Dark Order stable up and down the show.

You can catch AEW Dynamite's tribute to Jon Huber on Wednesday at 8pm et/5pm pt on TSN2, the TSN app, streaming on TSN Direct and on TSN.ca.

Six-man tag-team match: "The American Nightmare" Cody Rhodes, "Freshly Squeezed" Orange Cassidy and Preston "10" Vance vs. Team Taz ("Absolute" Ricky Starks, "The Machine" Brian Cage and Powerhouse Hobbs) (w/ Taz) - The three men teaming up to take on Team Taz were put together because they are the favourite wrestlers of Huber's son, Brodie, affectionately called "-1" of the Dark Order. All three men were also connected to Huber. Rhodes was Huber's last ever opponent, defeating him for the TNT title on Oct. 20. Cassidy and Huber's careers crossed paths on a number of occasions over the years, including a one-on-one match in the Toronto area for CHIKARA in 2012 (with Cassidy wrestling under a mask as Fire Ant). The pair last met in an AEW ring in September, when Huber successfully defended his TNT Championship against Cassidy on Dynamite. Vance is a member of the Dark Order stable that was led by Huber as its "Exalted One." As for their opponents on Wednesday night, Taz and Cage took to Twitter to say they were honoured to take part in the show.

Six-man tag-team match: AEW World Tag Team Champions The Young Bucks (Nick Jackson and Matt Jackson) and Colt "Boom Boom" Cabana vs. Matt Hardy and Private Party (Isiah Kassidy and Marq Quen) -  The Jacksons cut their teeth in many of the same promotions that Huber did over the years, including CHIKARA and Dragon Gate. The three men last shared a ring together in July when the Dark Order team that included Huber defeated the team of the Elite (the Jacksons, Kenny Omega and Adam Page) and FTR (Dax Harwood and Cash Wheeler) in a 12-man tag-team match. A member of Huber's Dark Order stable, Cabana also worked in many of the same promotions did across the continent. They last stepped into the ring together at the All Out pay-per-view in September as part of a Dark Order eight-man team, just over 15 years since they first did battle with Huber getting the better of Cabana at the 2005 NWA Upstate Anniversary Anarchy show that also featured future world champions, Bobby Roode, Jay Lethal and Chris "Abyss" Parks.

Six-man tag-team match: Inner Circle (Maxwell Jacob Friedman, Santana and Ortiz) vs. "Hangman" Adam Page and The Dark Order (John "4" Silver and Alex "3" Reynolds) - As evidenced by this week's edition of Being The Elite, Huber's influence on Silver and Reynolds was profound. Silver also revealed that Huber personally paid for his new ring gear at a cost of over $1,000. "He bought me the ring jacket to try to help me look like more of a star," Silver tweeted. Of those competing in this match, only Page competed against Huber in the ring. Hangman was part of the losing team on the July 30 edition of Dynamite when Huber's Dark Order team defeated The Elite and FTR in a 12-man tag match.

Anna "99" Jay and Tay Conti vs. Dr. Britt Baker, D.M.D. and "The Bad Girl" Penelope Ford - Jay is the lone female member of The Dark Order and, like the rest of her stablemates, she addressed how much Huber meant to her life and young career. "After my match against Brandi [Rhodes] on late night Dynamite, Brodie was the first person I saw when I came to the back," Jay tweeted. "I had no idea he was going to watch the match. He was the first person to tell me good job and was smiling. It meant a lot to me and I’ll never forget that." Baker also tweeted a number of photos and videos of herself with Huber over the years, calling him a "professional photobomber."

Eddie Kingston, The Butcher and The Blade (w/ The Bunny) vs. "The Murderhawk Monster" Lance Archer and The Dark Order (Evil Uno and Stu Grayson) - Of all the talent in AEW, few go further back with Huber than Eddie Kingston and The Butcher and The Blade. Kingston first stepped into the ring with Huber in 2009 as members of the same team in CHIKARA's King of Trios tournament and eventually fell in the first round to a team featuring Bryan "Daniel Bryan" Danielson and Claudio "Cesaro" Castagnoli. In the ensuing years, Huber and Kingston did battle in one-on-one title matches across multiple promotions. Huber successfully defended his Jersey All-Pro New Jersey State title against Kingston in 2010. Two years later in Ottawa, Kingston kept hold of his CHIKARA Grand Championship with a win over Huber in an incredibly hard-hitting encounter. Buffalo's The Blade and Huber, a native of Rochester, NY, also had a long history, both teaming with and vying against each other. In 2007, The Blade defeated Huber to capture the NWA Empire Heavyweight Championship in North Tonawanda, NY. Huber would fall again that year to The Blade in Toronto for UNION Wrestling. Also from Buffalo, The Butcher shared his memories of Huber this week. "Being from the same area will always solidify a friendship like it has lasted forever," he tweeted. "I could bring up anything and he’d know exactly what I was talking about. Jon Huber was a diamond wrapped in a human body." Members of The Dark Order, Uno and Grayson shared the ring with Huber many times over the years in promotions like CHIKARA and Combat Zone Wrestling. "He was universally loved backstage," Uno wrote of Huber on Twitter. "His love for his family was infectious. He spoke about his kids every single chance he could. He would show us pictures of Brodie Jr. holding up [WWE Luke] Harper action figures or sleeping with the TNT Championship. He is the measuring stick to how wrestlers should be. A great husband, a great father, a great friend, a great person. I hope I can make him proud by being half the man he was. I miss you Jon."