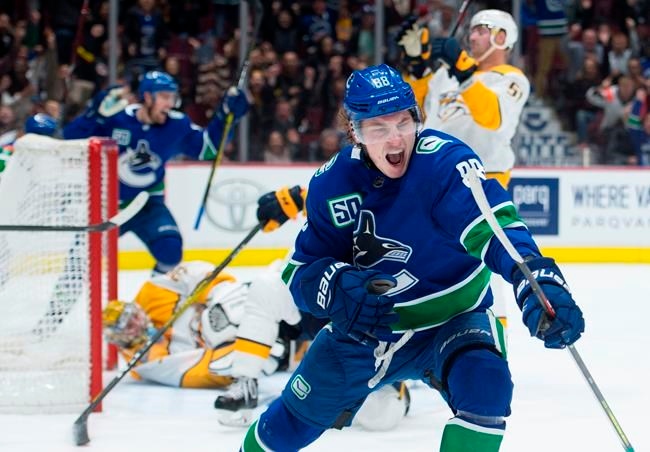 Is Adam Gaudette - without question - the Canucks third-line centre?

1) There is no defense for having no defense. The Canucks had a 6-3 lead with 14 minutes to play and let it get away. Now, give Pittsburgh -- and particularly Evgeni Malkin and Jake Guentzel -- credit. The Penguins were unfazed by the Canucks scoring twice in 35 seconds early in the third period to build their biggest lead of the night. From that point on, it was all Pittsburgh as the Pens pounced and scored five unanswered goals. It was shocking to see a Canucks team that has defended well and received top notch goaltending in every game since a 6-1 loss in Dallas to open this six-game road trip. But that all came apart over the final 14 minutes on Wednesday night. It's easy (and accurate) to say they could have used Brandon Sutter and/or Jay Beagle to help protect the lead they had built, but it's also necessary to point out that the Penguins would have liked to have had the services of Sidney Crosby.

2) It's hard to fathom scoring six goals and losing in regulation time. It's hard to imagine because it happens so rarely. In fact, the last time the Canucks lost like that was December 13, 2016 when the team took a 5-2 lead to the third period in Carolina and lost by the same 8-6 scoreline they were forced to accept in Pittsburgh. That night, the Hurricanes scored five straight third period goals at one point so there were similarities that went beyond the final score. The crazy part about the loss in Pittsburgh is that the Canucks did a number of good things -- and got what seemed in the moment like they would be key saves from Thatcher Demko. He made a terrific stop of Kris Letang moments before Jake Virtanen out-hustled the Pens defender to give the Canucks a 3-2 late in the second period. Then at 4-3 early in the third, Demko stoned Bryan Rust on a short-handed breakaway and the Canucks went the other way and extended their lead to 5-3 on a power play goal by JT Miller. The Canucks got depth scoring for the first time on the road trip, they generated even-strength offense which hasn't happened on the road trip and they even got a fortunate bounce on Miller's third period goal. None of that mattered because the team caved under pressure and couldn't defend.

3) The Canucks lost the game in the late stages, but it's remarkable they were even in it after the opening period. Two nights after being held to a season-low 17 shots on goal in Philadelphia, the Canucks took 14 minutes to generate their first shot on goal in Pittsburgh. To a man, the players all talked about how the performance against the Flyers wasn't good enough and they'd be ready from the drop of the puck in Pittsburgh -- and then they were down 2-0 on the scoreboard and 12-0 on the shot clock. Incredibly, they got out of the opening 20 minutes down just 2-1 despite being outshot 14-3. Travis Green admitted in his post-game remarks that he wasn't pleased with the team's performance in the early going and let his players know about during the first intermission. To their credit, the Canucks looked and played much better in the second scoring the only three goals of the middle frame. Consistency remains an issue for the Canucks who have really played just one complete game on this five game road trip -- their 2-1 shootout victory in Washington on Saturday.

4) The disappointing outcome unfortunately took attention off another sparkling performance by Quinn Hughes who set up three of the Canucks goals in 19:41 of ice time and finished on the right side of the ledger in shot shares at even-strength (54.5%) even though the team was outhshot 40-22 on the night. Hughes now has 19 assists and 21 points on the season. He is tied for fifth in scoring among all NHL defensemen finishing the night tied with Brent Burns. He is fourth on the hockey club in scoring behind only Elias Pettersson, JT Miller and Brock Boeser. His 21 points in 25 games (the team's 26th game) puts Hughes on pace for 66 points this season. No Canuck defenseman in franchise history has registered 66 points. Doug Lidster is the organization's single season points leader from the blueline with 63 in 1986-87. Dennis Kearns in the 1976-77 season is the only other Canuck defender to put up a 60 point season finishing on the number. That gives you a sense of the special things Hughes is doing as a 20-year-old in his first full season in the NHL. He's still learning. Imagine how special this guy will be when he figures things out. As the Canucks celebrate 50-years in the league, the team has had only one defenseman put up more than 50 points in a season over the past 25 years -- Jyrki Lumme had 54 in the 1995-96 campaign (Christian Ehrhoff finished with 50 in 2010-11 and Alex Edler had a career-high 49 in 2011-12). Sit back and enjoy the ride because Quinn Hughes gives every indication he is going to obliterate franchise records and who knows what his offensive ceiling might possibly be.

5) The Canucks fell to 2-3 on the road trip with one stop left in Edmonton on Saturday. Wednesday had the potential to be a swing game on this road run. A win -- one that looked so attainable at 6-3 in third third -- would have set the team up to take its best shot at four wins in six games with a victory over the Oilers. Now, the Canucks have to pick up the pieces in Pittsburgh and figure out how to defend the top two scorers in the league. It's a daunting task for sure and it's going to be interesting to see if there is a residual effect -- emotional or otherwise -- that lasts with the Canucks after this loss. This is a team that started the season 6-3 and things looked promising through much of October. However, starting with the team's other letdown loss of the season -- a 6-5 shootout setback in which they squandered a 5-1 lead at home against Washington on October 25th -- the Canucks are now 6-7-4 over their past 17 games. The prevailing thought has been that we would learn a lot about the team in a difficult November in which they've been away from home for most of the month. That run ends on Saturday in Edmonton. This month certainly won't sink the Canucks or their playoff hopes, but it underscores how much better they have to be. The final 15 minutes on Wednesday was a painful reminder of that, too.