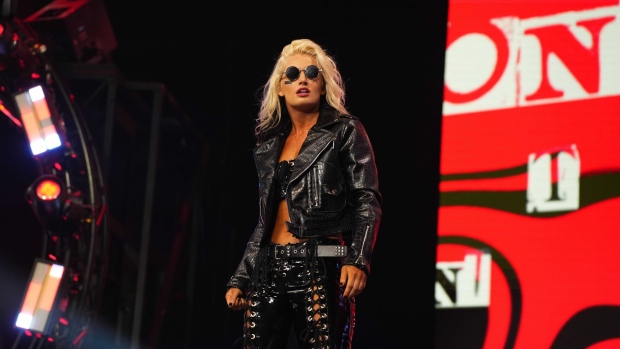 Former AEW Women's World Champion Dr. Britt Baker, DMD, teams up with Jamie Hayter to take on the team of Toni Storm and Ruby Soho. Plus, Riho meets Yuka Sakazaki in an Owen Hart qualifier and Jay Lethal does battle with Konosuke Takeshita. You can catch AEW Rampage at the special time of 5:30pm et/2:30pm pt streaming on TSN Direct and on TSN.ca.

Dr. Britt Baker, DMD, and Jamie Hayter (w/ Rebel) vs. Toni Storm and Ruby Soho - Four women who have punched their tickets to the Owen Hart Foundation Cup tournament will hit the ring on Rampage as Britt Baker and Jamie Hayter team up to face Toni Storm and Ruby Soho. The match will offer an Owen Hart preview with Hayter and Storm set to meet in the first round. Undefeated since her arrival in AEW, the match marks the first time that Storm has ever squared off with Baker. Getting the better of the former AEW Women's World Champion would be one helluva statement for Storm to make ahead of the tournament. There's no love lost between Soho and Baker, either. As champion, Baker defeated Soho at AEW Grand Slam at Arthur Ashe Stadium last August. While there might not be the highest of stakes in this match, a win heading into the Owen Hart could set the tone for a successful tournament run. Which team will emerge victorious?

Hook vs. J.D. Drake - Hook returns to action on Rampage, but his undefeated run will be put to the test against J.D. Drake. Drake possesses a significant size advantage against Hook, not to mention a large edge in experience, as well. But "The Cold-Hearted Handsome Devil" has been nothing but fearless in his time in AEW and appears to be completely unflappable. That's a good thing because Hook's had a lot going on over the past few weeks with "Smart" Mark Sterling's new client, "The Premier Athlete" Tony Nese, intent on a match and Danhausen trying to befriend (?) him. It will be up to Hook to maintain his focus on the task at hand inside of the ring and not whatever it is that's going on outside of it. Can he make it 8-0 in his young career or will Drake put a stop to his momentum?

Owen Hart Foundation Cup qualifying match; Riho vs. "The Magical Girl" Yuka Sakazaki - Britt Baker isn't the only former AEW Women's World Champion in action on Friday. Riho makes her AEW return in an Owen Hart qualifier against Yuka Sakazaki. This will be Riho's first match since her unsuccessful challenge for then-champion Baker's title at Battle of the Belts in January. In Sakazaki, Riho has a familiar opponent, having faced her in both AEW and Tokyo Joshi Pro-Wrestling. It will be the two women's first ever singles meeting, though. The match also represents Sakazaki's return after a lengthy AEW absence, having been back in Japan with TJPW. Sakazaki is 7-1 in AEW singles competition. Getting into the Owen Hart would be a great way for Riho to once again build towards title contention and for Sakazaki, it would represent a showcase for her return to AEW. Which of these two women will advance?

Jay Lethal (w/ Sonjay Dutt and Satnam Singh) vs. Konosuke Takeshita - On Dynamite this past Wednesday night, Jay Lethal once again expressed how disrespected he felt by AEW. He was furious because he believes that the company has rolled out the red carpet for Konosuke Takeshita in a way that he didn't receive when he joined AEW. Lethal vows to take out his frustrations on Takeshita during the Osaka native's Rampage debut. For those unfamiliar with the 26-year-old Takeshita, he's one of the biggest names in DDT Pro-Wrestling and is the current KO-D Openweight Champion. Takeshita is the youngest man to have ever held the title and he's currently in his fifth reign. Among those he's done battle with over the years include Kenny Omega, Kota Ibushi and Go Shiozaki. He's also held the KO-D Tag Team Championship four times, including a reign with Laval, Que.'s "Speedball" Mike Bailey. Undefeated in his short time in AEW, Lethal represents his biggest test to date. If Lethal weren't enough to deal with, Takeshita will also have to contend with Dutt and the monstrous Singh on the outside. Will Lethal prove a point or will Takeshita pick up his first signature victory in AEW?