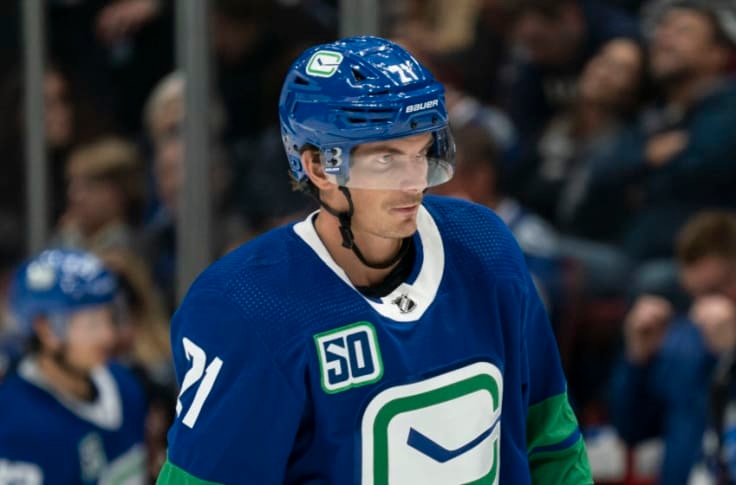 Is it Loui Eriksson time?

Paterson: We'll learn something about the Canucks tonight and how they respond

1. The better team won on Sunday. Of that, there was no doubt. Having said that, though, the Vancouver Canucks were still just a shot away from pushing the St. Louis Blues to the brink of playoff elimination. In the end, the Blues capitalized on a line change and a lack of on-ice recognition by a couple of Canucks after Quinn Hughes got in behind the St. Louis defenders. In a blink, Brayden Schenn, who was lurking in the neutral zone, was sprung on a breakaway and made no mistake beating Jacob Markstrom on the Blues 49th shot of the night 15:06 into overtime. Look, no one said this was going to be easy. And Sunday night was proof of that. The Canucks still hold a 2-1 lead in the series, but the Blues have some life and likely a significant boost in their confidence level knowing that their preferred style of play yielded the team’s first win in the Edmonton bubble. In a perfect world, the Canucks would have had a day between Games 3 and 4 to decompress, review game film and figure out a way to handle the Blues relentless forecheck. But as 2020 has reminded us time and time again this is hardly a perfect world. So with little time to rest, the Canucks need to find a way to be considerably better than they were last night as they get set to face the Blues again tonight.

2. The Canucks lost on Sunday despite opening the scoring, winning the special teams battle, getting a sparkling performance from Jacob Markstrom and with a productive Elias Pettersson taking advantage of time and space away from Ryan O’Reilly. On a lot of nights, if the Canucks were able to check off even three of those four boxes they probably find a way to win. But that’s playoff hockey. With five straight wins prior to Sunday, things had gone remarkably smoothly for Travis Green’s hockey club over the past 10 days. Now, for the first time since Game 1 of the Minnesota series, the Canucks face some adversity. It would be a much different story if their best players weren’t playing as well as they are – especially with the man-advantage. So the Canucks have no need to panic. But they do have to find a way to tilt the ice back in their favour at even-strength. According to Natural Stat Trick, the Blues crushed the Canucks in both scoring chances (49-21) and high-danger opportunities (19-8) at evens last night. Over the final 35 minutes of the game, the Canucks were hanging on far too much and relying on their goalie to keep them in it. The Canucks couldn’t generate any sustained offensive zone time because they couldn’t get out of their own zone. To their credit, the Blues smothered the Canucks on the forecheck and simply didn’t let up. We’ll see if they can do it for a second night in a row or if the Canucks can find ways to better support the puck, win a few more battles and move to the attack more than they did on Sunday night.

3. With Tyler Myers injured and unlikely to play again tonight, the Canucks options on defense are limited. They’ll likely stick with the same six blueliners and hope for better results. The biggest concern based on the evidence presented last night was the Alex Edler-Troy Stecher duo. Edler played a team-high 28:35 on Sunday and tonight will be back to back, three in four nights and the fourth game in six nights since this series started. That’s a heavy workload for anyone let alone a 34-year-old veteran who spent most of his night buried under a blanket of Blues. With the Edler-Stecher pair on the ice on Sunday, the Canucks were outshot 26-8 with St. Louis holding a 19-5 edge in scoring chances. Stecher was on the ice for all three of the Blues goals on the night and he struggled as he absorbed some of Myers ice time and logged 25:20. We’ll see if the Canucks try to shield Edler-Stecher and give more of the Ryan O’Reilly match-up to the Quinn Hughes-Chris Tanev pair. The gamble there is that O’Reilly is crushing the possession game – the Blues are controlling 80% of all even-strength shot attempts with O’Reilly on the ice through the first three games of this series – and the Canucks don’t want Hughes spending much of his night in the defensive zone. Can the Canucks rookie defender help neutralize the O’Reilly line by transitioning the puck and getting it out of the zone and up ice? It’s probably worth a shot because the Canucks can’t have another night like last night with Edler-Stecher under water as much as they were.

4. In an effort to free Elias Pettersson from the clutches of O’Reilly at even-strength, Travis Green elected to throw his fourth line of Jay Beagle-Tyler Motte and Zack MacEwen at the Blues big gun. That didn’t prove to be a shrewd move. The shots were 7-1 in favour of the Blues when that match-up was activated. One of the biggest surprises in this series so far is that O’Reilly and his linemates Jaden Schwartz and David Perron haven’t been able to translate their whopping possession advantage into offense to match. All three have scored in the series – in fact, Perron and Schwartz each have a pair of goals – but they have yet to have a night where all of that possession leads to a bundle of offense. The Canucks are likely playing with fire in that regard if the possession trend continues to favour the Blues so favourably. That’s why regardless of the outcome tonight, Game 4 has to look and feel so much different than Game 3. The Canucks found ways to win the first two games of the series, but looked overmatched for long-stretches by the Stanley Cup champs on Sunday. Tonight is a new night and we’ll see how quickly the Canucks can adapt to a Blues team that looks like it has awoken from a summer slumber through the first couple of weeks in the Edmonton bubble.

5. Give Craig Berube credit. Down 2-0 in the series, the Blues coach made a bold choice turning to back-up Jake Allen instead of Jordan Binnington in goal. He was also forced to make a couple of line-up changes due to injuries. So the question now becomes should Travis Green tinker with his line-up after the team’s first loss in two weeks? His options are limited. Despite the back to back scenario, the Canucks won’t make a goaltending switch. This is Jacob Markstrom’s team, he was strong – although a little too busy perhaps – last night and they’ll need a similar performance again tonight. Up front, Adam Gaudette is a possibility, but where does he slot in and for whom? An ineffective Antoine Roussel didn’t play much (just 7:35 on the night) and didn’t see the ice over the final 12 minutes of the third period or at all in overtime. Zack MacEwen struggled on Sunday losing Justin Faulk on the Blues first goal and also had what could have been a costly turnover to Brayden Schenn in the third. Jake Virtanen, who turns 24 today, played a career playoff high 14:06, had a shot on four attempts and registered four hits, but took a needless penalty in overtime that could have led to the game winner. Virtanen, MacEwen and Roussel are all wingers while Gaudette is a natural centre. So there’s no easy one for one swap. It’s probably time to give Gaudette another opportunity, but the Canucks may have to get creative to make it happen.