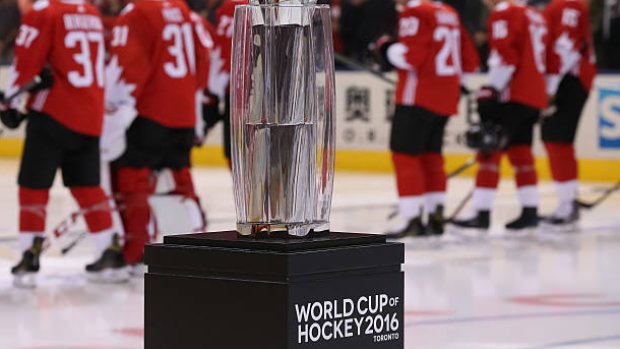 It appears the prospective 2024 World Cup of Hockey may be at risk of being delayed.

TSN Hockey Insider Pierre LeBrun reports that meetings about the event will continue next week, but the February 2024 timeline may no longer be feasible.

"Yeah, further discussions between the major stakeholders (of the) NHL, NHLPA, IIHF and some federations the weekend of November 4th and 5th in Tampere, Finland, when Colorado and Columbus are playing NHL games," LeBrun said Wednesday on Insider Trading. "Time is of the essence here. Let's be honest, there are people involved that thought that if things had been finalized, there was going to be a World Cup announcement this past summer.

"The idea was to have this tournament in February of '24. You know, Gary Bettman and Bill Daly last week after the Board of Governors meeting when I was there they hinted that, maybe the idea of delaying this tournament is on the table now. And I've talked with other people today, and I think it's something that other stakeholders have also talked about.

"The bottom line is, there are still outstanding issues with the IIHF that have not been addressed and of course, the elephant in the room and Bill Daly and Gary Bettman talking about (it) last week – what to do with Russia? There are other countries who don't want Russia to play in that tournament because of the war in Ukraine. It's a real difficult issue for the NHL (and) NHLPA to address so we'll see where this goes.

"But the idea of delaying the World Cup of Hockey to me has a little more legs now than it did perhaps a month ago."

NHL deputy commissioner Bill Daly said in August the league was pressing forward with plans for the 2024 tournament, and added the league was hopeful to split group round play between Europe and North America.

The tournament was last held in 2016 and, for the first time, had a team North America, made up of Canadian and American players under the age of 23, and a Team Europe with players from Austria, Denmark, France, Germany, Norway, Slovakia, Slovenia, and Switzerland.

Daly added that the 2024 event would return to the traditional format of individual countries, with a short list that would "universally encompass more traditional hockey markets."

Team Canada defeated Team Europe 2-0 in a best-of-three series to claim the title in 2016. The tournament was the last time many NHL stars represented their countries as the league elected not send players to 2018 and 2022 Olympics.

There have been three previous World Cup of Hockey tournaments, with Toronto playing host in 2016 and 2004, and Montreal and Philadelphia sharing hosting duties in 1996. Canada won each of the previous two events, while the United States won the debut tournament in 1996.