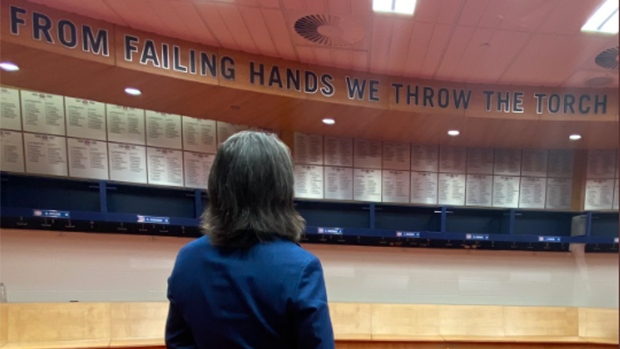 Barely a month into my first season covering the Montréal Canadiens in October 2007, the late, great Guy Lafleur fired that head-high clapper at his former club while guesting on a RDS panel. God love him and rest his soul.

And welcome to Montréal, John.

It was an instant immersion (language and culture, notwithstanding) into a new world for me, where rarely a dull moment passed: The final years of Saku Koivu's steadfast captaincy. The entirety of Carey Price’s compelling and brilliant career, and its potentially premature conclusion. Anthony Calvillo's ascension to the summit of pro football's passing yards mountain. Brendan Gallagher's perpetual and inspiring donation of blood, sweat and tears. The machine-like precision of Marc Trestman's dual championship squads. The electricity of P.K. Subban, full of swagger and philanthropy. The ferocity and charisma of bookends Anwar Stewart and John Bowman. The sun rising on a new generation of standard-bearers in freshly minted captain Nick Suzuki and Cole Caufield. The profoundly moving and celebratory farewells to the stately Jean Béliveau and the aforementioned Flower. Periodic Gong Show seasons contrasting with dizzying playoff runs, especially the wild ride to the 2021 Cup Final, which served as the venerable Shea Weber’s swansong.

The Bell Centre and Percival Molson Stadium became my offices, where the pulse of this remarkable city is manifested in their occupants. The thunderous cheers, the singing and chanting, the booing – all spontaneous, unfiltered and passionate – qualities which I’ve grown to appreciate in les Québécois.

Going to miss this guy! Massive part of our Habs on TSN team! So happy my guy @JohnLuTSNMtl gets to go back home to Winnipeg for the Jets gig. @djpoulin20 said he will step up his suit game in John’s absence. Much love buddy ❤️ pic.twitter.com/ObkCywRQX0

I will miss their joie de vivre, along with the mountains, rivers and ubiquitous beauty that give weight to the nickname, La Belle Province. I will crave Montréal smoked meat, authentic poutine (which, I learned, is pronounced “pou-TIN”), savoury pets de soeur (look up the hilarious translation), guilt-inducing creton, decadent tarte au sucre and alluring Coureur des Bois whiskey. When I growl, “Tabarnouche!” it will no longer feel right, except between the eastern Ontario and western New Brunswick borders.

I will miss the friends I’ve made along the way and my colleagues on the beat, not just for our camaraderie, but for contributing to my linguistic and cultural immersion by encouraging me to learn French songs to sing at our semi-annual karaoke parties. Heck, I hope they’ll remember me by continuing to sing my versions of their cult classic, Bobépine, which I rewrote as homages to former Canadiens GM Marc Bergevin and head coach Marty St. Louis.

But as much as I adopted Gerry Boulet’s Toujours Vivant as a credo during my time in Quebec, Prairie Town by Winnipeg’s Randy Bachman is my immutable truth. That truth is that even though I left Winnipeg more than 22 years ago to start my career with TSN, Winnipeg never left me. It never stopped being home. I grew up under the endless, azure prairie sky and braving the bone-chilling cold. I am a proud member of the ranks of Friendly Manitoba. The WHA Jets, Jets 1.0, and Blue Bombers were staples of my childhood and youth.

Because sports have been in my blood for a lifetime, I’ve always felt that if I could do what I love in my hometown, I would jump at the opportunity. In my new position — hosting for the first time in my career — it will be an honour and privilege to serve my fellow Manitobans while succeeding a beloved and universally respected Winnipegger who repped our hometown masterfully. Sara Orlesky set a standard of excellence for more than a decade on the Jets and Blue Bombers broadcasts and beats, and I will do my utmost to carry on that tradition.

I even have the pleasure of being part of a package deal — imported from Montréal — with my friend and colleague Dan Robertson. I know the humble Haligonian will endear himself to Jets fans with his powerful delivery and commanding, yet down-home style. He’s a genuinely good guy and will fit in well on the Prairies.

I also have personal reasons for my decision. For some time, I’ve felt the pull back to my family and lifelong friends more insistently. A health crisis exactly two years ago, followed shortly thereafter by the sudden passing of my only sister, were life-changing and motivating factors to find a way to come full circle.

Winnipeg, I’m coming home! I can’t wait to see you and start taking care of business.

I am overwhelmed by your Twitter replies & comments, messages, texts and emails. Thank you so much for your kindness & well wishes. I will say more later this week.

“Now my curtain has been drawn and my heart can go where my heart does belong. I’m going home.” Collective Soul pic.twitter.com/1rFiXYRydG