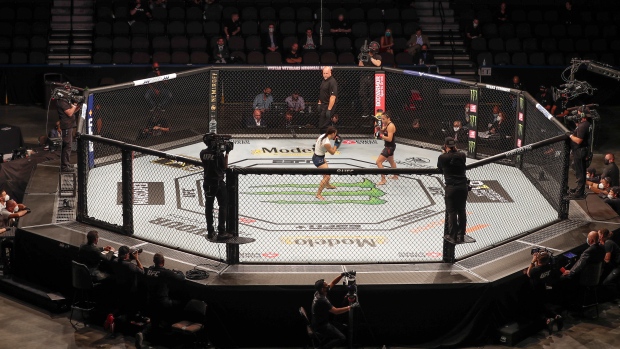 The province of Alberta is no longer offering wagers on UFC events.

“As of Dec. 1, AGLC stopped offering and accepting wagers on UFC events due to possible risks of wagering integrity,” said Lynden McBeth, senior communications officer for Alberta Gaming, Liquor and Cannabis (AGLC). “Previously placed UFC wagers on PlayAlberta.ca have been voided and the stake returned to the player.”

The decision follows an announcement from the Alcohol and Gaming Commission of Ontario (AGCO), which said Thursday it would be halting UFC wagering in the province as of Dec. 1 over integrity concerns.

On Oct. 17, the UFC added the following language to their Code of Conduct in regard to wagering:

“Athletes are prohibited from placing any wagers (directly or through a third party) on any UFC match, including placing any wagers on themselves. In most states with legalized sports betting, wagering by an athlete (directly or through a third party) on any MMA match put on by a promoter with which they are affiliated is illegal and may result in criminal sanction. Athletes should also be aware that in most states these same prohibitions apply to some or all of (i) relatives living in the same household as an athlete, (ii) an athlete’s coaches, managers, handlers, athletic trainers, medical professionals and staff, and (iii) any other person with access to non-public information regarding participants in any MMA match. An athlete that becomes aware or has knowledge of any wagering in violation of these restrictions must immediately notify UFC of such incident in accordance with this UFC Athlete Conduct Policy.”

Despite making that addition to the Code of Conduct, irregular betting activity occurred in the hours leading up to a Nov. 5 bout between Darrick Minner and Shayilan Nuerdanbieke, with several large wagers being registered for Nuerdanbieke. According to ESPN’s David Payne Purdum, multiple sportsbooks reported unusual betting interest specifically on Nuerdanbieke winning via first-round knockout or technical knockout.

Nuerdanbieke ended up defeating Minner, who was visibly injured early in the bout, at 1:07 of the first round.

According to Purdum, the influx of wagers prompted an investigation by U.S. Integrity, a Las Vegas-based firm that works with sportsbooks to monitor the waging market in the U.S.

In the wake of the decisions made by the provinces of Ontario and Alberta, the UFC released a statement Friday afternoon announcing that Minner has been released from the organization.

“Following the fight involving Darrick Minner on November 5, 2022, UFC was informed by sources that suspicious betting patterns had been observed on the fight,” the UFC statement reads. “In the weeks following the fight, UFC has been cooperating with multiple ongoing government investigations into the facts and circumstances surrounding that contest.  On November 18, the Nevada State Athletic Commission informed UFC and Minner’s coach, James Krause, that Krause’s license was suspended and would remain so while NSAC conducted an investigation into the matter. UFC has since advised Krause and the respective managers working with impacted fighters, that effective immediately, fighters who choose to continue to be coached by Krause or who continue to train in his gym, will not be permitted to participate in UFC events pending the outcome of the aforementioned government investigations.”

McBeth added that “AGLC will continue to monitor standards implemented by UFC before reinstating betting options on Play Alberta. … Once we are confident that UFC’s regulator body is effectively protecting fighters, fans and bettors, AGLC will give every consideration to reinstating betting markets on PlayAlberta.ca."

The AGLC released a statement Friday, saying it is “aware of today’s developments with the UFC and will continue to monitor the situation.”

The UFC had released a statement last month saying that its betting integrity partner, Don Best Sports, would “conduct a thorough review of the facts and report its findings” and added that it believed neither athlete, nor anyone associated with their teams, behaved in an unethical manner.

A spokesperson from the AGCO told TSN that the UFC must demonstrate the effective supervision and enforcement of their code of conduct as it pertains to insider wagering before the reinstatement of UFC wagering would be considered.

The AGCO said in a statement released Friday evening that it “can confirm it has received the UFC’s statement of earlier today. At this time, we are not aware of any changes to the UFC’s insider wagering policies, which are inconsistent with betting integrity standards for gaming operators in Ontario. The AGCO remains committed to working with Ontario’s gaming industry, UFC, the OLG, and iGaming Ontario to ensure that the UFC has necessary betting integrity safeguards in place, in particular those relating to wagering by UFC insiders.”

“Along with the safety and health of its fighters, UFC believes there is no more important component of professional mixed martial arts than the integrity of the sport,” reads the UFC statement released Friday. “Weeks prior to the Minner fight, the organization sent formal notification to all fighters and members of their teams that they and certain other defined ‘insiders’ were prohibited from wagering on UFC events. This was an extension of UFC’s pre-existing (and since updated) fighter Code of Conduct as well as a recognition of various state, federal, and international laws and regulations expressly prohibiting conduct that threatens the integrity of the sport including, but not limited to, insider betting based on non-public information, fight-fixing, and other such misconduct. UFC will continue to take all necessary and appropriate steps to ensure compliance with and enforcement of its policies and those of the jurisdictions in which it operates.”