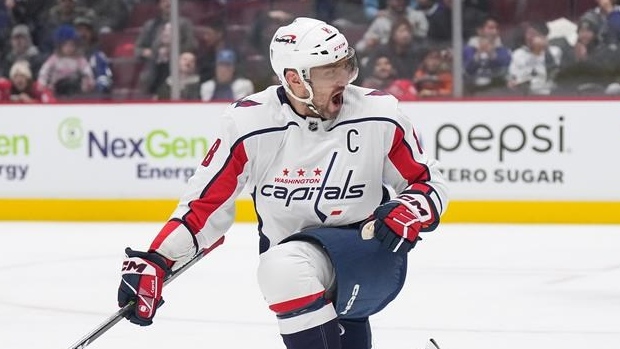 That showed Tuesday when he hit yet another milestone, scoring twice as his Washington Capitals downed the Canucks 5-1 in Vancouver.

The 37-year-old Russian now has 403 road goals, passing Wayne Gretzky for the most in NHL history.

“It's always nice when you beat the Great One," Ovechkin said. "It doesn't matter what kind of milestone it is. It's history.”

Breaking records is nothing new for the future Hall of Famer and watching history be made has been a treat for his teammates.

"I think he has 13 goals this year and I want to say like eight or nine have been like a new record. So it's been cool," said Washington centre Dylan Strome. "Any time you pass Wayne Gretzky in anything, it deserves a standing ovation, which he got."

Anthony Mantha chipped in a goal and an assist for the Capitals (10-11-3), while John Carlson and Martin Fehervary also scored. Washington's Darcy Kuemper stopped 31-of-32 shots.

Nils Hoglander had the lone tally for the Canucks (9-11-3), who got 23 saves from Spencer Martin.

The result snapped a three-game win streak for Vancouver.

Ovechkin put away his first goal of the night 5:35 into the game. As Quinn Hughes came around from behind the net, he picked the puck off the Vancouver defenceman's stick and batted a quick shot in to give Washington the early 1-0 lead.

It was his 135th game-opening goal, tying Jaromir Jagr for the most in the NHL's history books.

Ovechkin's 403rd road goal came 11:52 into the opening frame, when he blasted a one-timer from the faceoff circle for his 13th of the season.

Hoglander got the Canucks on the board 13:55 into the first with his second goal of the season. The Swedish winger collected the puck from Miller and cut across the crease, tucking a backhanded shot between the post and Kuemper's skate.

The play extended Miller's point streak to nine games with four goals and seven assists across the stretch.

Forty seconds later, the Capitals regained a two-goal lead. Alone at the top of the crease, Anthony Mantha fired a wrist shot past Martin to put Washington up 3-1.

Lars Eller registered an assist on the play, marking the 200th helper of his NHL career.

“It could have been 6-1 after the first period, quite frankly, with the amount of chances (Washington) had," said Canucks head coach Bruce Boudreau.

The veteran NHL bench boss coached the Capitals from 2007 to 2011 and said Ovechkin is always going to score.

"On his second goal, it looks like ‘Oh, maybe (Martin) should have had it.’ But I’ve seen (Ovechkin) score 100 goals like that," Boudreau said. "He’s got a shot that finds its way in.

"Spencer’s been great for us. He’s probably a bit like the other players tonight. They weren’t ready to play and it showed on the scoreboard.”

Carlson put away the lone tally of the second, chipping in a loose puck from the low hash marks 18:47 into the period to give Washington a three-goal cushion.

Ovechkin nearly netted a hat trick when Vancouver pulled Martin in favour of an extra attacker with just over six minutes left on the game clock, but his rocket of a shot skimmed the outside post of the empty net.

Fehervary went on to seal the score at 5-1, flipping a high puck into the Canucks' zone and into the unmanned crease 15:57 into the third.

The result gives the Capitals a sweep of the two-game season series. They also took a 6-4 win over the Canucks in Washington on Oct. 17.

Washington went 0-for-1 with the man advantage Tuesday and Vancouver went 0-for-3.

The Canucks continue a four-game homestand Thursday when they host the Florida Panthers. The Capitals take on the Kraken in Seattle the same night.