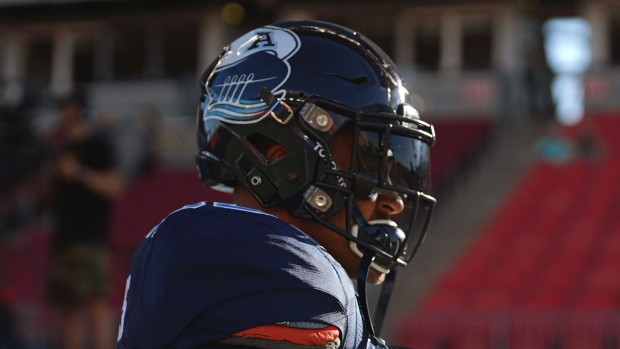 Toronto Argonauts running back Andrew Harris was at the team's practice but did not participate while wide receiver Brandon Banks was absent, according to TSN's Matthew Scianitti.

Andrew Harris is at #Argos practice but is not participating. Harris came off at the end of the game holding his wrist. LS Maxime Latour is back after finishing the season last year after Jake Reinhart’s arm injury. Reinhart (arm) is not at practice @CFLonTsN @TSNedge

The 35-year-old Harris injured his wrist during the Argos' Week 9 win over the Hamilton Tiger-Cats. Following the game, head coach Ryan Dinwiddie told reports following practice it was only a stinger.

Since coming over from the two-time defending Grey Cup Champion Winnipeg Blue Bombers, Harris has played in seven games for the Argonauts, tallying 111 carries for 471 yards. In Week 7, Harris became the first Canadian-born player to rush for 10,000 yards during the team's Touchdown Atlantic rematch against the Saskatchewan Roughriders.

Scianitti also notes that Brandon Banks, who is slated to make his first return to Tim Hortons Field since signing with the Argonauts, was not in attendance as he was attending to a personal matter.

Ryan Dinwiddie says Brandon Banks was attending to a personal matter Tuesday, but is expected back before Friday’s game. Dinwiddie is not concerned about Andrew Harris’s hand, sounds like it was only a stinger @CFLonTSN @TSN_Edge #TSNedge

Banks, 34, spent eight seasons with the Tiger-Cats after signing with them mid-season in 2013. He went on to star in the return game, tallying 6,822 yards and seven touchdowns along with 422 receptions for 5,678 yards and 45 touchdowns as a receiver in 111 games.

In addition, the Argonauts announced the signing of defensive back Maurice Carnell IV and long snapper Maxime Latour who played six games for the Double Blue last season after Jake Reinhart, who did not practice, suffered a season-ending elbow injury.