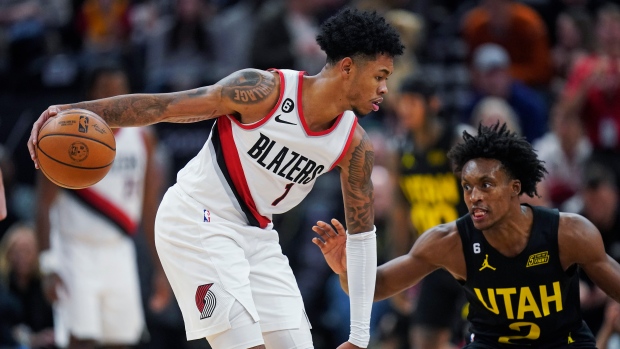 SALT LAKE CITY (AP) — Anfernee Simons scored a career-high 45 points and blocked a potential 3-pointer with 4.6 seconds left to lead the Portland Trail Blazers to a 116-111 win over the Utah Jazz on Saturday night.

“I wanted to be aggressive and set the tone for my teammates,” Simons said. “Early on, let them know that we are in this game and I’m going to do whatever it takes for us to win it.”

The Jazz led 111-110 after Kelly Olynyk’s twisting jumper and then had a chance to tie it at 114, but Simons swiped the ball from Jordan Clarkson as he rose for a 3-point attempt from the right angle.

“I just tried to catch him before he went up. ... Kind of a risky play, but I’m glad I got it,” Simons said with a chuckle.

The Trail Blazers had lost seven of their last eight games before winning this thriller as Damian Lillard missed his seventh game with a lower right leg injury.

Portland’s Jerami Grant scored 13 of his 33 points in the fourth quarter as the Jazz swarmed Simons.

Jusuf Nurkic had 15 points and 14 rebounds and Trendon Watford finished with a career-high 14 rebounds, too.

The Jazz held Simons to just one field goal attempt in the fourth quarter, but he hit two free throws with 29.2 seconds to play, giving Portland a 112-111 lead. Grant added four free throws in the final 6.4 seconds for the final margin.

Clarkson had 24 points, and Lauri Markkanen added 21 for the Jazz, but committed two turnovers in the final 35.7 seconds. Collin Sexton scored 19 points and Jarred Vanderbilt had a season-high 16 for Utah.

Portland led 107-101 on Grant’s 3-pointer with 4:12 to play, but Sexton scored five quick points in 10-3 run that was highlighted by Markkanen’s block of Simon’s drive in the final minute.

Simons scored 23 points in the first quarter — a season high for Simons, as well as any Blazers player in any quarter. Simons had 22 in the third quarter against Denver on Oct. 24.

“You have to come out in the very beginning and try to set the tone. Doesn’t matter that it’s the second night of a back-to-back. They came out with an aggressiveness and a physicality that we didn’t (have),” Utah coach Will Hardy said.

PLAYING TO WIN, NOT JUST SCORE

“In the back of my mind, I wanted 50. But there’s going to be plenty of opportunities for that. It’s all right, because we got the win,” Simons said.

“That play was gross. I’m happy Jordan is not hurt. Not that it was a dirty play ... but when a guy goes up in the air and lands on his back going for a dunk, you would hope that one gets called. But again that’s life in the NBA. I’ll have to rethink my Christmas shopping,” Hardy said about his first career technical foul and the resulting fine after a no-call on Clarkson’s attempt.

Blazers: Josh Hart was out with a left ankle sprain and Gary Payton is getting close to a return, but was also a scratch, leaving Portland with nine healthy players.