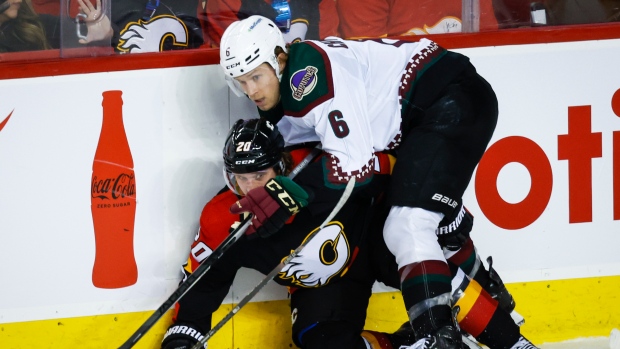 With Jakob Chychrun healthy and producing for the Arizona Coyotes and it appears trade talk surrounding the defenceman could be intensifying.

"It seems like it’s picking up and there’s a couple of reasons to consider for that," TSN Hockey Insider Darren Dreger said Tuesday. "Obviously we’re at a point in the regular season where the pressure on general managers and on owners have progressed.

"So, they’re feeling the heat, in other words.

"Then you have to push that aside and look at the game of Chychrun. Since he’s returned, he’s played seven games and has three goals and three assists. He’s a big man and he’s got a bomb for a shot.

"I still think there’s apprehension among clubs with the most interest to pay the price that Coyotes general manager Bill Armstrong is looking for, but I think there’s also a group of teams that are getting to a point that they realize they may have to."

TSN Hockey Insider Pierre LeBrun reported last month that the price for the 24-year-old remains steep, with the Coyotes seeking first-round picks plus either a prospect or a young NHL player in return.

Chychrun has logged over 20 minutes of ice time in all but one of his seven games since returning from injury for the Coyotes, who sit tied for last in the Central Division with 18 points.

A first-round pick in 2016, Chychrun revealed in September that the Coyotes first approached him about a possible trade to a contender before last season and he took them up on the offer.

“Throughout the start of last season, I had a lot of reflection time and some really, really emotional, hard reflections with my loved ones and family," he said "We ultimately decided to take them up on that offer and try to get moved on to a better situation.”

He is in the fourth year of his six-year, $27.6 million contract with an average annual value of $4.6 million.