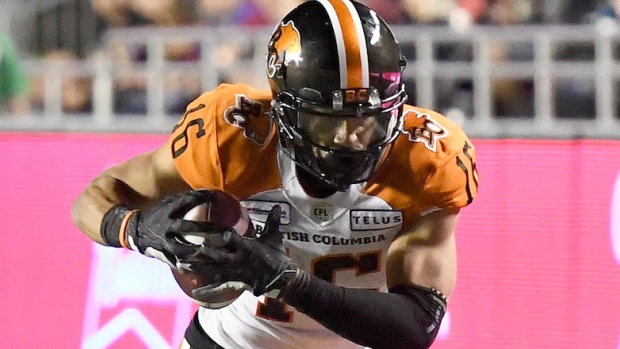 VANCOUVER — Bryan Burnham says he's been fortunate to play eight years in the CFL, and even more so to spend his entire career with one team.

He is just not prepared to sacrifice family for football anymore.

Burnham announced Tuesday he was retiring after a stellar career as a receiver with the B.C Lions that saw earn four CFL all-star nods and crack the 1,000-yard mark in four consecutive seasons.

"It's just crazy to think that you know this all started back in 2014 and just how much times have changed, how much the locker room has changed," Burnham said in a video conference from his home in Tulsa, Okla.

"And the fact that I'm still here in 2022, that I was still sitting in that locker room, still going to work every day for the B.C. Lions. It's just such a privilege."

But it was a privilege that came with a price, not only for him but his wife.

"A lot of hard work went into it, and a lot of sacrifice," Burnham said. "And that sacrifice wasn't just made by me, but it was made by my wife.

"We are at a point now where I'm not willing to make that sacrifice anymore."

Burnham, 32, said he came into the 2022 season thinking it would be his last. He said had the COVID-19 pandemic not wiped out the 2020 season, he might have called it quits a season before.

Playing the extra season turned out to be a boon for Burnham. While he was limited to nine games due to injuries, including a broken wrist sustained in a loss to Calgary on Sept. 25, he still managed 596 yards and four touchdowns on 41 receptions.

He also got to end his career on a high, as the Lions posted a 12-6 record and advanced to the West Division final, where they were defeated 28-20 by Winnipeg.

"I'm proud of what this team accomplished this year," Burnham said. "We were picked to be dead last in the league I think, and we ended up being eight points away from making it to the Grey Cup."

He also witnessed the rise of star quarterback Nathan Rourke. The Victoria native was impressive in his first year as a starter, throwing for 3,349 yards despite being limited to 10 games because of a foot injury. Rourke set a CFL record for the highest completion percentage in a single season at 78.7 per cent.

Burnham told Rourke after the West final loss to Winnipeg that "he gave this last season of my career meaning."

"Can't wait to to tell the kids when we're watching him on Sundays soon that I've played with that guy," Burnham said of Rourke. "So yeah, man, Nathan is a great kid."

Burnham had 476 receptions and 7,212 receiving yards with the Lions. Both marks rank fourth in franchise history.

His 43 touchdown receptions are seventh all-time among Lions receivers.

Burnham was the Lions' finalist for the league's outstanding player award in 2019, when he set career highs with 1,492 receiving yards and 11 touchdowns.

Burnham made his professional debut on Sept. 19, 2014, becoming a regular the following season.

Burnham said he is working on a master's degree as he and his wife raise three foster kids back in Tulsa, something he says comes with its own set of challenges.

"The three-year old stuck something up her nose so I was fishing that out last night," he said. "But I lay down at the end of the day and I'm happy. So yeah, man, it's been great."

This report by The Canadian Press was first published Dec. 6, 2022.