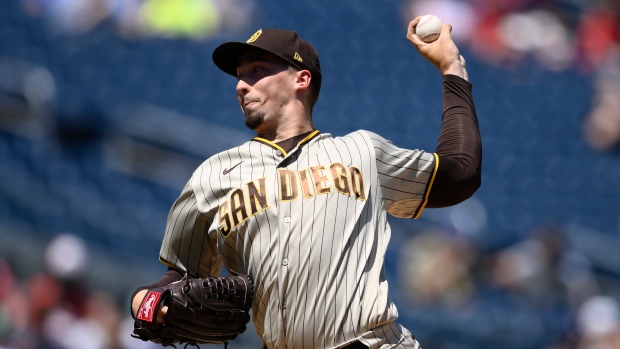 WASHINGTON (AP) — Blake Snell struck out 10 in six sharp innings, Juan Soto reached base three times and the San Diego Padres wrapped up a hectic weekend with a 6-0 win over the Washington Nationals on Sunday.

On Friday, with so much focus on Soto’s return to Washington after a major trade this month, the Padres found out star shortstop Fernando Tatis Jr. had been suspended 80 games after testing positive for a performance-enhancing substance.

Then Saturday, San Diego manager Bob Melvin was upset with a disputed call at home plate in a one-run loss. Sunday was smoother all around because of Snell.

“Hard to prepare at noon for a game, that’s tough,” Snell said. “I was able to figure out sleep and get that locked in. And I felt better than I thought I was going to feel, so I was excited about that.”

The Nationals were less excited about his outing.

Wil Myers, whose playing time was reduced by the acquisitions of Soto and Josh Bell, had three hits for the Padres. Soto singled and walked twice.

Myers hit an RBI double in the second. Jurickson Profar drew a leadoff walk in the third, Soto and Manny Machado singled and a grounder made it 3-0.

Myers drove in another run in the sixth and the Padres added two runs in the ninth.

“You want to incorporate everybody,” Melvin said. “This guy’s been a starter here for quite some time.”

Nationals rookie first baseman Joey Meneses had two hits. He now has 14 in his 10 career big league games, the most by any Nationals player (2005-present) in that span. Soto, Luis García and Ian Desmond all had 12 hits in their first 10 games.

“Right now, he’s hitting it hard on the ground,” Melvin said. “He’ll elevate some balls, he does have a ground ball rate. He swings down through the ball. Hits it hard. Right now, it’s just on ground a little bit. But once he elevates it some, I think you’ll see what has to offer.”

CALL WILL TAKE WHAT HE CAN GET

Nationals outfielder Alex Call was claimed off waivers Aug. 7 after the Cleveland Guardians designated him for assignment about a month after he made his major league debut.

Washington quickly claimed Call, which meant over the course of two weeks, Call would play for two minor league teams and two major league teams: July 31, he went 1 for 2 and walked twice for the Guardians. He played for Triple-A Columbus from Aug. 2-4. Then he was with Washington’s Triple-A affiliate, the Rochester Red Wings, from Aug. 9-13 before debuting for the Nationals as their leadoff hitter Sunday.

“I was in Cleveland, when I got sent down, we had just got back from Tampa Bay,” Call said. “Drove to Columbus, we had an off-day. Was in Columbus, played Tuesday, Wednesday, Thursday. DFA’d on Friday. Then sat in my apartment for 48 hours. Got claimed on Sunday afternoon … 4 o’clock game on Sunday. I went and said hi to the manager. But then went home and packed up my stuff. Drove to Rochester on Monday, our off-day, played Tuesday through Saturday, then got about four hours of sleep (Saturday night) and took the 6:40 (a.m. flight) from Rochester to D.C. And here we are.”

Nationals: RHP Josiah Gray (7-8, 4.81) takes the mound in Nationals Park to begin a three-game series against the Chicago Cubs.