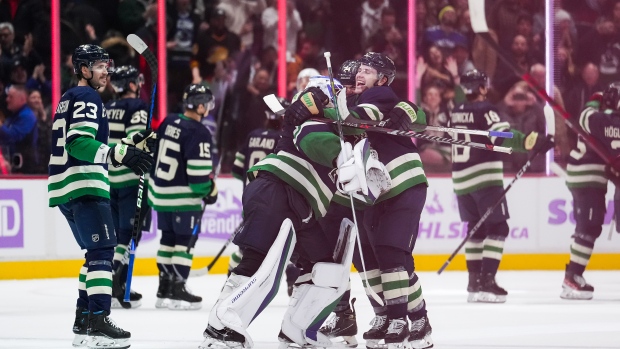 VANCOUVER — Bo Horvat scored with 50.1 seconds left in overtime and the struggling Vancouver Canucks edged the Arizona Coyotes 3-2 on Saturday.

Horvat and Brock Boeser also had goals for the Canucks (10-12-3) in regulation.

Jakob Chychrun and Christian Fischer scored for the Coyotes (7-11-4), who are winless in their last four outings.

Spencer Martin stopped 21-of-23 shots for the Canucks. He takes over the crease from Thatcher Demko, who’s expected to miss about six weeks after leaving Thursday’s loss to the Florida Panthers with a lower-body injury.

Karel Vejmelka made 29 saves for Arizona.

Horvat tipped Quinn Hughes' long bomb in from the slot on an overtime power play after Arizona was called for too many men.

Boeser forced overtime, dropping to one knee to get off a blistering wrist shot that soared past Vejmelka and tied the game at 2-2 at the 11:48 mark of the third.

Vancouver got a prime chance to draw level late in the second when Arizona took back-to-back penalties, giving the Canucks a two-man advantage for a minute and 19 seconds. The home side failed to registered a single shot across the stretch.

It briefly appeared as if Vancouver's Nils Aman got on the scoreboard 17:00 into the middle frame with a shot from the top of the crease as Arizona's J.J. Moser fell into the net, knocking it off its pegs.

Officials on the ice called a goal, but a review determined the net was knocked off "well prior" to the goal being scored.

Earlier in the frame, Canucks' winger Nils Hoglander saw his goal waived off due to teammate J.T. Miller's hooking penalty.

Arizona retook the lead 1:52 into the second after Hughes was called for hooking.

Chychrun launched a one-timer from the top of the faceoff circle, sending the puck sailing into the top corner of the net to give the Coyotes a 2-1 lead.

Vancouver got a power-play goal of its own 16:49 into the first after Arizona's Nick Schmaltz was called for delay of game for putting the puck over the glass.

Pettersson blasted a shot from distance and Horvat, stationed at the side of the net, tipped it in to level the score at 1-1 with his 18th goal of the season.

The Canucks went 1 for 8 with the man advantage Saturday while the Coyotes were 1 for 3.

An errant pass led to the game's opening goal. Arizona's Jusso Valimaki picked off the puck and sliced it to Liam O'Brien, who sprang Fischer for a clear breakaway.

Fischer slid a shot under Martin's left pad 11:22 into the first for his fifth goal of the season.

Canucks coach Bruce Boudreau said Saturday morning that Boeser would be a healthy scratch against the Coyotes. The right-winger drew into the lineup after Dakota Joshua picked up a minor injury in the morning skate.

PLAYING FOR A CURE

The Canucks close out a four-game homestand Monday when they host the Montreal Canadiens. The Coyotes fight the Flames in Calgary the same night.