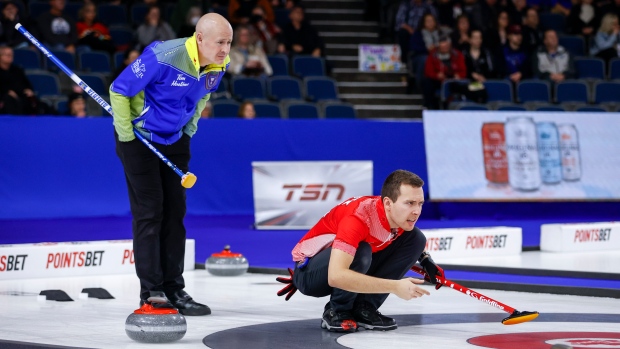 The teams may look a lot different, but the rivalry between Kevin Koe and Brendan Bottcher is stronger than ever.

Playing in their first event as a foursome, Team Bottcher edged their Alberta counterparts, the new-look Team Koe, in the final of the ATB Okotoks Classic, by a score of 3-2 on Sunday.

Massive thanks to our friends at @atbfinancial for supporting curling and our team with another great event put on by the hard-working crew at the @OkotoksCurling! pic.twitter.com/MdcwbEaXb8

The championship final saw four blanked ends and no deuces as Bottcher won the game after scoring a single with hammer in the extra end.

Bottcher, alongside third Marc Kennedy, second Brett Gallant and former Team Koe lead Ben Hebert won all six games over the four-day event, including beating Alberta’s Team Karsten Sturmay in the quarterfinal as well as Matt Dunstone and his new-team from Manitoba in the semi-final.

Team Koe ran the table, including playoff wins over Manitoba’s Team Reid Carruthers in the quarters and Saskatchewan’s Team Colton Flasch in the semis, before running into Bottcher’s crew in the final.

Koe, third Tyler Tardi and the front-end duo of second Bradly Thiessen and lead Karrick Martin, formerly of Team Bottcher, were playing in their first event as a team as well.

Team John Epping also made the playoffs but lost to Team Dunstone in the quarters.

In Winnipeg, Team Kaitlyn Lawes picked up their first win of the season after topping Team Sarah Anderson of the United States in the final of the Mother Club Fall Curling Classic, 6-2.

Team Lawes, who lost to Anna Hasselborg’s Swedish rink in the Oslo Cup final earlier this month, went 6-1 at the Mother Club bonspiel and are now a very impressive 12-2 on the young season.

Team Wiebe went undefeated in the round robin and won their semifinal in an extra end. They defeated Team McDonald 5-4 in the Final. Congrats @TeamRWiebe 👏 pic.twitter.com/ne4dSlUzbH

Team Braden Calvert, who are the 12th seed at this week’s PointsBet Invitational, fell to Team McDonald in the semi-final.

Team Clancy Grandy and Team Corryn Brown, both out of British Columbia, each missed the playoffs with identical 3-3 records.

Next up is the PointsBet Invitational, running from Sept. 21-25 in Fredericton, N.B. The March Madness-style single elimination tournament will see big names – including Team Koe, Team Bottcher and Team Lawes - competing for cold hard cash in the first major event of the new quadrennial.