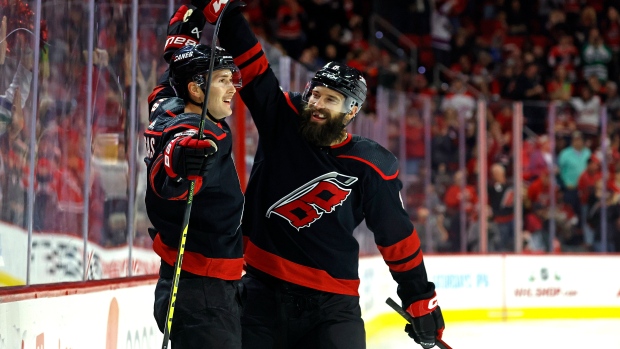 RALEIGH, N.C. (AP) — Brett Pesce’s first goal of the season snapped a third-period tie and the Carolina Hurricanes ended a five-game winless streak with a 3-2 victory over the Calgary Flames on Saturday.

“This was huge for us, just our confidence,” Pesce said. “Just finding a way to win again.”

Pesce’s power-play goal came with 11:14 to play. It was his first goal since March.

Antti Raanta made 19 saves in his first action in five games. He dealt with an injury earlier in the week and was scratched from a scheduled start Wednesday night.

Adam Ruzicka and Tyler Toffoli scored for the Flames, who ended a six-game trip with a 2-3-1 record. Dan Vladar, who stopped 30 shots, is winless since his first outing of the season in mid-October.

Raanta faced only four shots in the third period.

“We played well all through this stretch and just haven’t got any bounces,” said Hurricanes coach Rod Brind’Amour, whose team last won Nov. 14 at Chicago. “That’s kind of what it has felt like.”

“The power play has got to come through, and it did,” Brind’Amour said.

Perhaps now the conversion regarding Carolina’s power play can take a different tone.

“The power play was the reason we won,” Jarvis said.

The Flames, coming off a shutout loss a day earlier at Washington, have managed a total of three goals in their last three games.

“We’ve got to score more,” Flames center Mikael Backlund said. “We got some looks.”

Jarvis snapped a personal 11-game goal drought when he converted a pass from Brent Burns at 6:20 of the first period.

The Flames tied the score on Ruzicka’s power-play goal with 1:51 left in the first.

Necas’ 10th goal of the season put Carolina on top in the second. Toffoli countered with a tying goal for the Flames less than seven minutes later.

Toffoli’s goal came on a breakaway when he waited at the blue line and was alone when Jonathan Huberdeau delivered a pass.

Vladar is the No. 2 goalie for Calgary, but he said he expects to make bigger contributions. He referenced his 1-4-1 record this season.

“It got to be better,” Vladar said. “I’ve got to get some Ws for this team. It’s just frustrating for me.”

Raanta said a puck struck his knee awkwardly in Wednesday’s morning skate. He took time off before appearing in another game.

“You always want to play when it’s your turn,” Raanta said.

He’s tied with Frederik Andersen, who has been out since Nov. 6 with an injury, with a team-high eight appearances among Carolina’s goalies.

The Flames missed one of the objectives on their season-long six-game trip. They secured five points.

“You want more points than games played,” coach Darryl Sutter said. “That’s the best way to look at it. When you go on trips that are three or more games, that's what you want.”

The result avoided the first six-game winless streak of Brind’Amour’s coaching career of four-plus seasons. … Necas didn’t have his 10th goal last season until his 59th game, so he’s well ahead of that pace after 22 games. … Toffoli posted his 200th career goal, becoming the sixth skater from the 2010 draft class to reach that mark. Among first-round picks that year, he’s the first to record 200 goals.

Flames: Tuesday versus Florida to begin a five-game homestand.

Hurricanes: Tuesday at Pittsburgh to begin a six-game road stretch.