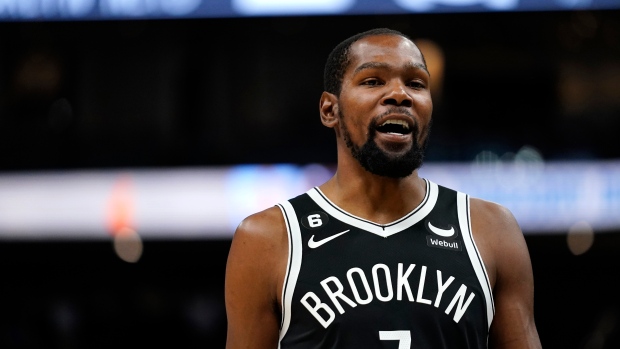 Kevin Durant's return to the Brooklyn Nets lineup is one step closer.

The team announced Tuesday that the 12-time All-Star has been given the go-ahead to resume on-court activities as he continues to recuperate from an MCL strain.

The Nets said the 34-year-old Durant met with Dr. Riley Williams on Monday.

"Dr. Williams is very pleased with Durant’s recovery thus far, as he is progressing well and as expected," the team said in a statement. "Durant will continue to strengthen his knee and begin running and on-court basketball activities this week."

Durant is set to be reevaluated in two weeks.

A native of Washington, DC, Durant has missed the team's last six games and hasn't played since a 102-101 victory over the Miami Heat on Jan. 8.

The Nets (29-17) sit in fourth place in the Eastern Conference, five games behind the conference-leading Boston Celtics. The team returns to action on Wednesday night with a visit to the Philadelphia 76ers (30-16).