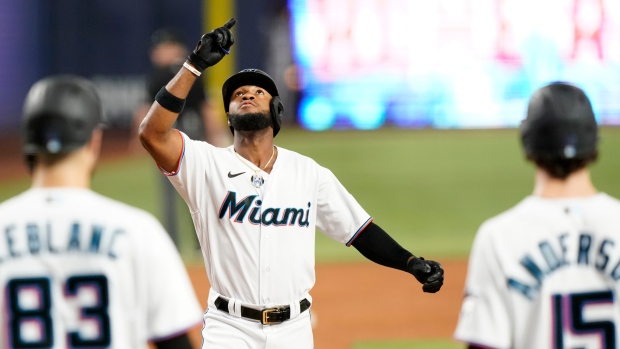 Miami starter Edward Cabrera (6-3) threw five innings of three-run ball. The rookie right-hander gave up three hits, walked three, struck out four and hit two batters in a 79-pitch outing that was cut short because of a blister on his right middle finger.

“I was a little bit upset with myself because I couldn’t continue,” Cabrera said. “I had to take advantage of the big lead and finish the fifth inning.”

De La Cruz’s blast off Cubs starter Wade Miley (1-1) capped a five-run third and erased a 2-0 deficit. He is hitting .333 with three homers and 12 RBIs since being recalled a second time this season from Triple-A on Sept. 7.

“When I went down, I worked on my consistency,” De La Cruz said in Spanish. “I took advantage of playing every day and thank God now I have another opportunity.”

Berti hit a solo homer to put Miami on the board. Leblanc then reached on a fielding error, Brian Anderson was hit by a pitch and Nick Fortes hit a two-out infield single that loaded the bases. De La Cruz followed with an opposite-field drive to right-center for his 10th homer and second career grand slam.

The Marlins added two runs in the fourth and ended Miley’s outing after three-plus innings. Jerar Encarnación scored from third on a wild pitch and Berti hit an RBI single.

In his third start since returning from the 60-day injured list, Miley allowed seven runs, three earned, on seven hits. He walked two in addition to plunking Anderson.

De La Cruz had another bases-loaded opportunity in the fourth but Chicago reliever Jeremiah Estrada struck him out, ending an eight-pitch at bat.

Rojas’ run-scoring single in the seventh made it 8-3 and Leblanc hit a two-run shot in the eighth.

“We had a lot of contributions from a lot of different guys,” Marlins manager Don Mattingly said. “A nice offensive game for us.”

“You get up early and you like your chances with Wade on the mound when he’s locked in,” Cubs manager David Ross said. “Those two early runs were big but we just gave them right back.”

“I was 95 percent certain it was going over,” De La Cruz said. “All the credit to him. In the ninth, all I thought about was if he hits one my way, I was going to do the same to him.”

Fortes' single before De La Cruz’s slam was anything but routine. Fortes hit a high chopper to third that shattered his bat. The ball and pieces of the bat sailed in Cubs third baseman David Bote’s direction. As Bote attempted to field the grounder, the ball deflected off the bag.

Marlins: LHP Trevor Rogers (lat strain) will be shut down for the season. He exited after the first inning of his start at Washington on Saturday. A 2021 All-Star, Rogers struggled most of the season and finished 5-11 with a 5.47 ERA.