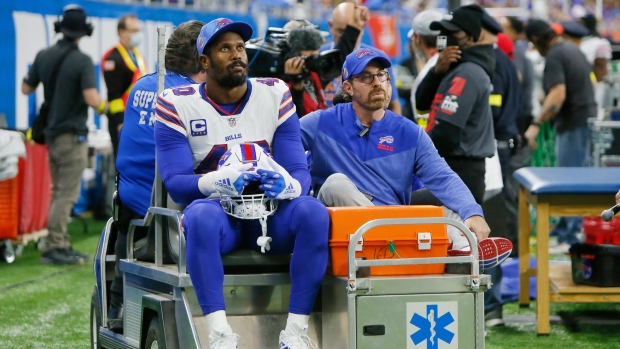 Buffalo Bills star pass rusher Von Miller did not tear his ACL in the Bills' victory over the Detroit Lions on Thursday, but the extent of the damage to his right knee is still being reviewed, ESPN's Adam Schefter reports.

Bills' LB Von Miller did not tear his ACL, but there is other damage that doctors are reviewing to determine how much time he will miss and for now he is out indefinitely, per sources. He could be out a couple of weeks, it could be season ending; more info still being gathered.

Miller sustained the injury to his knee late in the second quarter, and was visibly distraught on the sideline before he was taken to the locker room on a cart.

The 33-year-old tore his ACL in that same knee in 2013, which caused him to miss the final seven games of the season and required surgery to repair.

Miller, who won Super Bowls with the Denver Broncos (2016) and Los Angeles Rams (2022), has delivered on expectations with his new team to this point, registering a forced fumble and eight sacks in 11 games.

Originally drafted second overall by the Broncos in the 2011 NFL Draft, the DeSoto, Texas native has 123.5 sacks (most among active players in the NFL) and 27 forced fumbles in his 11-year career.

Buffalo returns to the field next Thursday for a crucial divisional matchup against the New England Patriots, where they're hopeful Gregory Rousseau, who has been out with an ankle issue for three games now, is able to return to help the pass rush that may struggle without Miller.