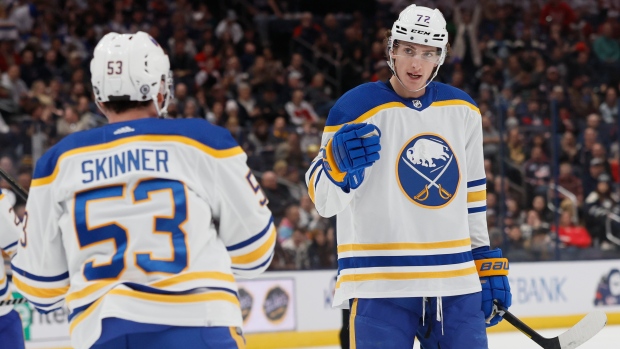 Tage Thompson and the Buffalo Sabres had a night to remember Wednesday against the Columbus Blue Jackets.

The 25-year-old Thompson scored four of Buffalo's six goals in the opening period, including three in the first 12:22 minutes. Thompson also assisted on Dylan Cozens' opening goal for a total of five points in the period. He added his fifth goal of the night in the second period.

The Sabres beat the Jackets 9-4 at Nationwide Arena in Columbus.

The record for most goals in a single game is seven by Joe Malone of the Quebec Bulldogs in 1920.

Thompson is the fourth player in NHL history to score four goals in the first period of a regular-season game. Peter Bondra, Grant Mulvey and Malone are the others.

Toronto Maple Leafs legend Darryl Sittler has the record for most points in a single game, recording 10 points against the Boston Bruins at Maple Leafs Gardens on Feb. 7, 1976.

Thompson now has 21 goals and 19 assists over 26 games this season with the Sabres, his fifth in Buffalo.