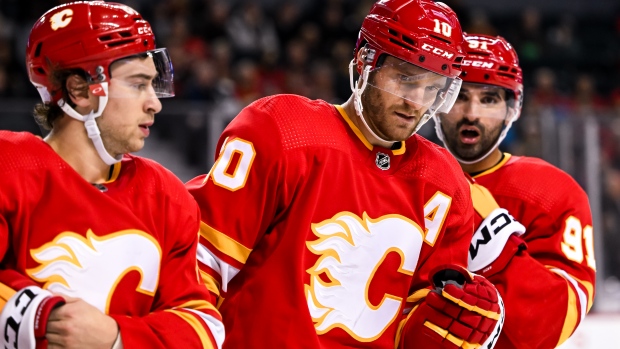 On Saturday, trailing by a goal to the Carolina Hurricanes in a game Dan Vladar had effectively stolen by making several high-calibre saves, the Calgary Flames pulled their goalie with less than two minutes left in an effort to tie it up.

The Flames, having already endured a seven-game losing streak this season, failed to register a shot or generate any meaningful offensive zone time over that final stretch with the extra skater, losing 3-2.

Exceptional goaltending aside, that sequence was a microcosm of Calgary’s season. They were slower than the opposition, out of sync, didn’t penetrate scoring areas, and ultimately couldn’t deliver in a high-leverage moment.

Through a quarter of the season, Calgary – considered by many to be a legitimate Stanley Cup contender – is .500 (9-9-3) and fifth in a Pacific Division it won last season, looking like a borderline playoff team with questions throughout the lineup. Their start has revealed some worrying trends:

The goaltending has taken a step back

From last season to this season, the Flames’ team save percentage has plummeted from first to 29th, and both their slot and inner-slot save percentages have cratered from third to 22nd.

Few people expected Jacob Markstrom to completely replicate his incredible 2021-22 campaign, but no one thought he’d regress to a below-average netminder. Among the 47 goalies who have played at least eight games, Markstrom is 40th in save percentage (.889) and 31st in goals-against average (3.03).

He’s also shown a troubling habit of giving up one bad goal per game. Markstrom has been rightfully lauded for helping change the culture of the team, but he’s not been reliable enough so far this season.

Vladar has been more consistent and played very well against Carolina. He deserves a run of starts while Markstrom tries to regain form.

They have a very hard time scoring goals

Perhaps we all underestimated the power of regression after half the roster posted career-high stats last season.

While Calgary lost a couple of stars in Johnny Gaudreau and Matthew Tkachuk, it also added two in Jonathan Huberdeau and Nazem Kadri, plus a very good puck-moving blueliner in MacKenzie Weegar. Despite that, scoring has been a huge challenge for this group.

They predictably dump the puck in, try to win battles in the corner, feed the puck back to the point, and rely on tips. They don’t cycle as effectively, nor do they drive the net for second chances or shoot from the slot.

Part of that might be that the Flames are slower than last season, but heavier teams have found success in the recent past in the league. This group, which was likely not going to replicate last season’s offensive heights, is still extremely talented and hard-working but has to find a way to generate more goals.

The Flames aren’t as deep as we thought

“This depth stuff we talked about in the summer, it’s a bunch of bulls--t," head coach Darryl Sutter said earlier in November during the seven-game losing streak.

The Flames dearly miss defenceman Oliver Kylington, who remains away from the group for personal reasons with no timeline on a return. He was their fastest-skating blueliner, a big factor in their transition game, and formed a great second pairing with Chris Tanev.

After injuries to Tanev and Michael Stone, Connor Mackey was unable to seize the opportunity and the team had to recall AHLers Dennis Gilbert and Nick DeSimone, forcing Sutter to play large chunks of games with essentially five blueliners.

Up front, a lot of the depth has been rested on the shoulders of Andrew Mangiapane and Dillon Dube, who have struggled to fill the void as Jonathan Huberdeau has taken longer than anticipated to adjust to the new system.

Mangiapane, who is fresh off a new contract that more than doubled his salary after a 35-goal season in 2021-22, has been ineffective on too many nights and is on pace for just 12 goals and 28 points while not being nearly as noticeable on the forecheck. Dube has only three goals and six points through 21 games after a career-high 18 goals and 32 points last season.

The forwards as a whole haven’t quite looked the same since Sutter swapped lines after the Oct. 29 loss to the Oilers. After that game, Sutter elevated Milan Lucic to the second line and had Kadri play with Huberdeau and Mangiapane.

They are out of sync

Between the broken plays in the offensive zone, missed defensive zone assignments, inability to close out games, blown leads and a lack of emotion, there’s something off about how this group is responding, one that is tough to quantify.

Sutter is a very demanding coach, but as this veteran group continues its middling start, the  bench boss and his staff could have to alter their messaging or how they deliver it to get the most out of them.

Right now, the most impactful potential changes in the short-term for Calgary are internal.

Prospects Matthew Phillips, Connor Zary, and Jakob Pelletier are deserving of callups after starting very well in the AHL. They won’t save the team but would provide a different element of speed and energy. The coaches can adapt. The players can have a Festivus-esque airing of grievances and turn the page on these first 21 games.

More than 60 games remain, but in a season that began with some of the highest expectations in franchise history, the Flames have shown worrying trends that if not corrected, will derail those hopes.