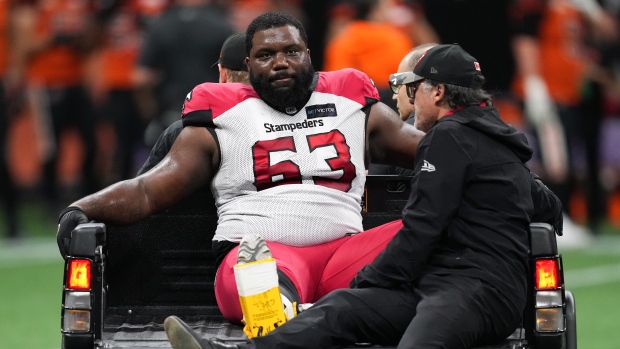 Calgary Stampeders left tackle Derek Dennis was carted off the field after injuring his right leg in the first quarter against the BC Lions.

Stampeders' running back Peyton Logan took a handoff to the left side and stumbled as he approached the line of scrimmage before rolling over Dennis' right leg.

The six-year CFL veteran immediately went to the ground in pain and stayed there for almost 10 minutes while the training staff treated him.

An emergency cast was placed over Dennis' right ankle before he was lifted onto the medical cart and removed from the field.

The team has provided no further update to his injury status at this time.

Dennis, who played college ball at Temple in the NCAA, bounced around NFL practice squads before landing with the Stampeders in 2015. He is a three-time CFL West All-Star (2016, 2018 and 2019).

The 33-year-old has also spent time with the Edmonton Elks and Saskatchewan Roughriders of the CFL, and in the XFL in 2020. The Queens, NY native has appeared in 14 games for the Stampeders this season.

Bryce Bell replaced Dennis on the offensive line for Calgary.