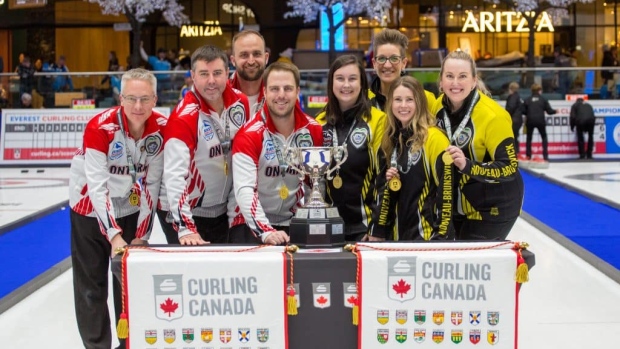 John Epping and his team from Toronto picked up their second win of the 2022-23 season this weekend at the Challenge De Curling Desjardins in Clermont, Que.

Epping, joined by Mathew Camm at third, Patrick Janssen at second and Scot Chadwick at lead went a perfect 6-0 at the bonspiel with playoff wins over Team Owen Purcell in the quarterfinal, Team Francois Roberge in the semi-final and defending Quebec champion Team Felix Asselin in the final, 7-4.

In the final, Team Epping were down 4-2 after five ends, but would score one in the sixth, steal three more in the seventh and added another single in the eighth and final end.

Asselin topped Team Paul Flemming and Team Hayato Sato in the playoffs to get to the championship game.

Epping and company won the Stu Sells 1824 Halifax Classic earlier this month and are now 30-16 on the season.

Curling champions were crowned this weekend at the 2022 Everest Canadian Curling Clubs Championships in Edmonton.

Ontario's Team Greg Balsdon won a record fourth men's title for the province with a 6-2 win over Quebec in the final.

Check out our rockstars! We are proud to announce this year’s Men’s Everest Curling Club Championships winners:

“We’ve been together for a very long time. My guys are so supportive and lift me up when I’m down and we’ve been trying to get better and better and we were pretty darn good this week,” Balsdon told Curling Canada after the game.

Check out our rockstars! We are proud to announce this year’s Women’s Everest Curling Club Championships winners:

“I can’t even put into words what just happened … it just means a lot and shows people that even if you’re an underdog there’s always hope for you, just go out there and have fun and try your hardest,” said Park.

The week-long event happened at the Ice Palace in the West Edmonton Mall.

In Leduc, the mixed-doubles team of Winnipeg's Chelsea Carey and Colin Hodgson fell to Edmonton's Paige Papley and Evan van Amsterdam, 8-7, in an extra end.

Carey and Hodgson led the dramatic final 4-2 after six ends before giving up a five-spot in the seventh. They sent the game to an extra after putting up three in the eighth before allowing a score of one in the extra end.

Other Winners on Tour