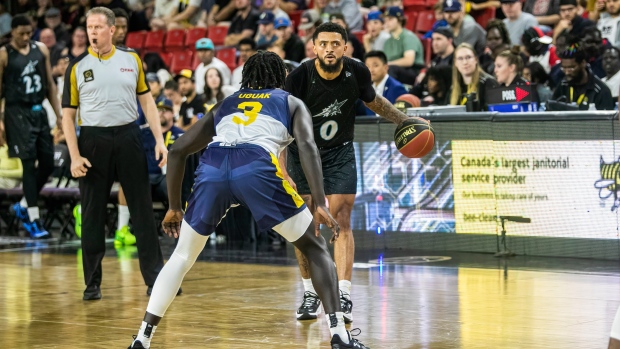 Perhaps no one is more confident in the present and future of the Canadian Elite Basketball League than its commissioner and CEO Mike Morreale.

Four seasons in with 10 teams, there is increasing curiosity in the current health of the league and the timeline to bring on more expansion franchises.

Morreale accepts that those questions come with the territory for a league continuing to push for global recognition in the basketball landscape.

"We are now the largest professional league in Canada, so I expect us to have more attention and with that comes more - I'm not going to say stress - but more pressure to make sure we're doing things right," said Morreale ahead of the CEBL's Championship Weekend in Ottawa.

"But that's okay. That's what we wanted from the get-go. The goal was not to be a six-team league that just scooted by. This is to be a major league and we want to be one of the top five FIBA leagues in the entire world. You only get there by growing and becoming better and better every year."

Following a season of increased parity and talent on the court, Morreale says there is a tremendous amount of excitement as the league prepares to crown a champion from Ontario for the first time.

"Especially coming off back-to-back COVID years and this really being one of the first sports to set the tone for a return to sport from a fan perspective, we didn't know exactly what to expect," said Morreale.

"We knew there would be some pent up energy. We also knew there'd be some COVID hangover. I think we've exceeded our goals in terms of attendance and viewership and partnerships and certainly the play on the court."

The biggest revenue driver for the league is attendance. According to Morreale, league-wide average attendance for 2022 was approximately 2,000 per game - which falls below the often-mentioned goal of 2,500-3,000 - but marks an increase from when the CEBL last played a full season in front of fans in 2019.

"Much more than half of our teams are hitting above that target and then there's some markets that, depending on the day of the week, [possibly] below," Morreale said of the current attendance figures.

"That's part of the strategy that we have to look at and the analyzing we need to do. Across the board, I would say there's always work that needs to be done, but there's also some great steps forward this year."

The Fraser Valley Bandits, who fell to the Guelph Nighthawks in a play-in game last week, are an example of a thriving market for the league at the gate, typically drawing above average numbers.

Upon relocating from Abbotsford to Langley, B.C., for the 2022 season, the Bandits set a new CEBL record for single-game attendance with 4,404 when they hosted the Shooting Stars on June 18.

Morreale now considers the Bandits as essentially a Vancouver-based team and said that a scheduling conflict had prevented them from playing home games at the Langley Events Centre in previous seasons.

As for establishing a rival franchise for the Bandits in B.C., Morreale mentioned Victoria or Kelowna as possibilities.

However, the CEBL is more focused on adding clubs in Calgary and Winnipeg to balance out the overall distribution of teams. Currently just three of the league's 10 teams are west of Ontario - the Bandits, the two-time champion Edmonton Stingers and the Saskatchewan Rattlers.

Quebec City also remains a primary area of interest for the CEBL and further expansion into Atlantic Canada continues to be discussed.

After bringing on three new teams in 2022 - the Shooting Stars, Montreal Alliance and Newfoundland Growlers -  Morreale isn't ruling out the possibility of expansion for 2023, but, either way, he will not rush the process.

"I always believe that we have to do this very slow and very steady," said Morreale, adding that expansion talk has mainly been pushed to 2024. "It's funny saying that growing three teams last year, but we had worked on that for years and years prior to know where we wanted to go and how we wanted things to play out.