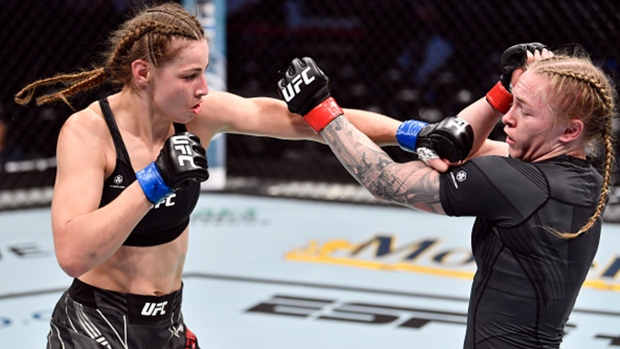 The 33-year-old from St. Catharines, Ont., will face Brazil's Gabriella (Gabi) Fernandes instead of American Cortney (Cast Iron) Casey at the UFC's Apex production facility. The UFC cited an undisclosed medical reason for the change.

The 29-year-old Fernandes (8-1-0) looks to extend her win streak to eight as she makes her UFC debut. She signed with the UFC after winning the interim Legacy Fighting Alliance (LFA) flyweight championship.

Jasudavicius (7-2-0) is 1-1-0 in the UFC since earning her contract on Dana White's Contender Series in September 2021. She lost a decision to Brazil's Natalia Silva in June after winning her UFC debut in January 2022 with a decision over American Kay Hansen at UFC 270.

Malott (8-1-1) is coming off a first-round TKO win in his UFC debut against Micky Gall at UFC 273 in April. The 31-year-old from Waterdown, Ont., who now calls Burlington home, won his UFC contract on Dana White's Contender Series with a 39-second submission of Israel's Shimon (Assassin) Smotritsky in October 2021.

Lainesse (9-1-0) also used a win in White's feeder promotion to make the jump to the UFC. The 30-year-old from Montreal is 1-1 in the promotion, coming off a split-decision victory over Darian Weeks at UFC 279 in September.

This report by The Canadian Press was first published Jan. 24, 2023