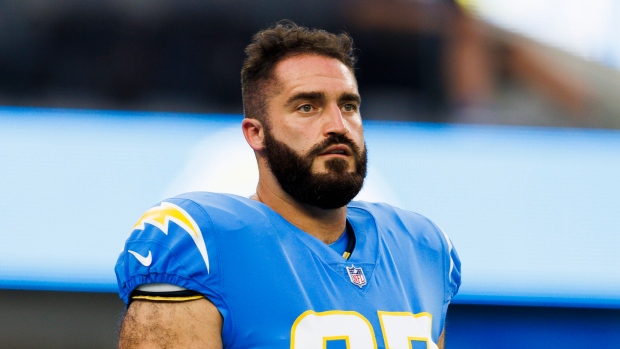 The six-foot-three, 315-pound offensive lineman is in his first full week practising with the Toronto Argonauts. Hunter, 27, of North Bay, Ont., signed with the CFL club Friday after spending four seasons in the NFL with the Kansas City Chiefs (2018-19) and Los Angeles Chargers (2020-21).

"That's it, I'm just happy to be where I'm wanted and still playing football," Hunter said following the Argos' practice Tuesday. "I've always said I wanted to play pro football at the highest available level and now for me that's what this is.

"I'm here to help this team in whatever way I can."

Hunter is proving to be a quick study. Toronto (8-5) visits the Calgary Stampeders (9-5) on Saturday night and Hunter feels he'll be ready to play for his new team by then.

Toronto has already clinched a home playoff game and is looking to finish atop the East Division — and cement home field for the conference final — for a second straight year.

"Physically I feel great, I'm in the best shape of my life," he said. "I'm familiar with a lot of the actual plays, it's just the terminology that's different.

"It's a matter of being able to process things mentally and make sure your feet are in sync with your head."

Hunter's new football locale will also make it much easier for family and friends to come watch him play. Hunter anticipates having a vocal contingent present at BMO Field on Oct. 8 when Toronto hosts the B.C. Lions.

Toronto selected Hunter in the first round, ninth overall, in the 2018 CFL draft out of Bowling Green. But Hunter signed as an undrafted free agent with Kansas City and was on the Chiefs active roster for their 31-20 Super Bowl win over the San Francisco 49ers on Feb. 2, 2020 before being released before the '20 campaign.

Hunter joined the Chargers on Oct. 1, 2020 but was waived last August.

"He brings that NFL experience," Toronto head coach Ryan Dinwiddie said of Hunter. "He has learned a lot of football (in U.S.), he's learned how to be a pro and his professionalism can be infectious in the O-line room.

"And he's just a nasty, physical player. We're looking forward to him going in there and bringing some toughness to the O-line."

But Dinwiddie said Hunter won't be rushed into the Argos' lineup.

"He's picking it (Argos offence) up," said Dinwiddie, who also serves as Toronto's offensive co-ordinator. "He's a sharp kid ... he'll pick it up and we feel good about it.

"Is it going to be this week (that Hunter plays) who knows? But we're going to get him on the field soon."

Hunter brings plenty of versatility to the Argos' offensive front, saying he spent time at all five offensive line positions during his NFL tenure. And that's certainly a good thing for Toronto as Canadian tackle Shane Richards (quad) didn't practise Tuesday and centre/guard Peter Nicastro, a Calgary native, remains on the six-game injured list with a knee ailment.

Once Hunter gets on the field, he should help Toronto's pass protection as the Argos have allowed 36 sacks, third-most in the CFL this season.

"That's awesome, I love it," Toronto quarterback McLeod Bethel-Thompson, the CFL passing leader (3,672 yards) said of Hunter's arrival. "He's already picking up the offence and it's great to have him."

Toronto went with four Canadian starting offensive linemen in last week's 45-15 road win over Ottawa. Justin Lawrence was at centre, Gregor Mackellar and Dariusz Bladek lined up at guard while Philip Blake and American Dejon Allen were the tackles.

Hunter isn't worried about having to get acclimated to a third different team and city in four years. It's something he's become very used to.

After redshirting his first year, Hunter played 52 games over the next four seasons, starting at both right and left tackle as well as guard. Hunter also excelled in the classroom, earning All-MAC academic honours all four years before embarking on a pro career.

"At the very least he gives us good depth and you can never have enough depth," Dinwiddie said. "He's going to make us a better football club, make our O-line better and that's going to help us offensively."

Hunter is also having no difficulty readjusting to Canadian football and relishes the opportunity to chase a Grey Cup title and earn another championship ring.

"You can never have enough of those," he said with a chuckle.