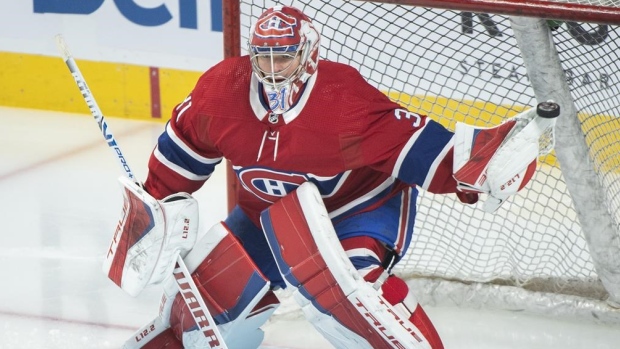 #Habs Hughes says Price will be placed on off-season LTIR today. The Canadiens will get cap relief in the amount of $10.5M @TSN_Edge

This gets Montreal under the off-season cap -- which the team briefly exceeded upon announcing the Kirby Dach contract extension Wednesday -- as well as the regular season cap.

The 35-year-old played in just five games last season toward the end of the schedule as he spent much of the year recovering from an off-season knee procedure. In those five games, Price went 1-4 with a .878 save percentage and a 3.63 goals-against average. He won the Bill Masterton Memorial Trophy as the player who best exemplifies the qualities of perseverance, sportsmanship and dedication to hockey. The season before, Price helped lead the Habs to the Stanley Cup Final, where they fell in five games to the Tampa Bay Lightning.

He is heading into the fifth year of an eight-year, $84 million deal he signed in July of 2017. The contract carries a cap hit of $10.5 million with the majority of each season being paid out via signing bonus, according to CapFriendly.

The Anaheim Lake, B.C., native was selected fifth overall in the 2005 NHL Draft and has played 15 seasons in the Montreal crease. He has finished in the top five in Vezina Trophy voting five times, winning the award in 2014-15 along with the Hart Memorial Trophy.

Meanwhile, Hughes said he anticipates forward Paul Byron will start the season but described his health as a "grey area" that may require him going onto LTIR. Byron scored four goals and added three assists in 27 games last season and underwent a minor procedure in the off-season.

Hughes revealed that newly-acquired forward Sean Monahan (hip) will skate with his teammates Thursday and is feeling good. Monahan is expected to return for opening night, and if not then, pretty close to then, according to Hughes. He added the same goes for forward Jonathan Drouin.